Two reports misquoted this line from Trump’s initial statement on the violence. Quote — this is what Trump said — “We condemn in the strongest possible terms this egregious display of hatred, bigotry, and violence on many sides, on many sides.” Glenn Thrush, formally of The Politico, moving up to the New York Times, bungled the quote in a report on the furious reaction to Trump’s remarks. “Correction: August 14th, 2017, an earlier version of this article misquoted part of President Trump’s statement on the violence in Charlottesville. He blamed many sides, not all sides for the violence that left one woman dead.” 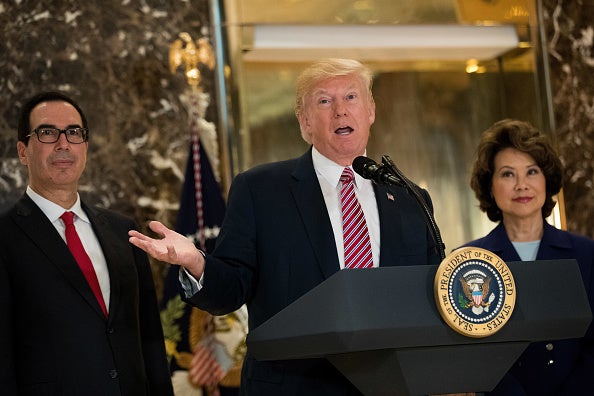 So Thrush, in reporting what Trump said, said that Trump said that there was violence “on all sides.” But he didn’t. He said, “On many sides.” Trump didn’t misspeak on any of this. It was the media. These are misquotes. They are in a purposely misquoted article. They made it up. And this is just one publication, the New York Times.

Andrew Ross Sorkin also bungled the quote that same day in a report on outraged CEOs, which prompted an identical correction. Correction: “August 14th, 2017, an earlier version of this column misquoted part of President Trump’s statement on the violence in Charlottesville. He blamed many sides, not all sides, for the violence that left one woman dead.” Now, look, I know that nobody sees the corrections; the damage was done. And it has been very damaging. But these two guys took the same quote, both reporters, and made it up. They said Trump blamed all sides. Trump didn’t. He said “many sides.”

You might say, “What’s the big deal?” Well, because they’re trying to set it up here. These people purposely lied that Donald Trump was sympathetic to the KKK and the Nazis. That’s what they did. They lied. They put words in Trump’s mouth and they quoted things Trump had never said to make it look like Trump was trying to defend the supremacists and the KKK and the neo-Nazis.

Now, it’s a huge correction. You might think it’s not a big deal, “many sides” versus “all sides,” but it’s a big correction because by claiming Trump blamed all sides, the Times was saying that Trump blamed Antifa. And in the media’s medians, Antifa cannot ever be blamed. In Gary Cohn’s mind, you can’t blame Antifa. “Why, these are just citizens standing up for peace and freedom and equality,” and that is flat out out BS. They are the violence, they are the aggressors, they are the anti-Americans, they are the provocateurs, and they exist in far greater numbers than the pathetic KKK, the pathetic neo-Nazis, and these white supremacists, in electoral terms, couldn’t even fill a phone booth.