RUSH: Are you ready for this? I’m gonna read you a headline. This is at Ole Miss University. University of Mississippi. Eli Manning went there; Archie Manning went there. A lot of people went there. It’s still a thriving place. “Greek Life Retreat Cancelled After Banana Peel Found in Tree.” This comes from our old buddies at Campus Reform. “A Greek Life retreat at the University of Mississippi (Ole Miss) was promptly cancelled this weekend after a banana peel was found hanging in a tree.

“A student said he threw the peel because he could not find a garbage can, but the incident made some students uneasy, so the school ‘felt it was imperative to provide space immediately to students affected by this incident. … ‘To be clear, many members of our community were hurt, frightened, and upset by what occurred [there].’ Interim Director of Fraternity and Sorority Life Alexa Lee Arndt remarked in an email between Greek leaders, according to The Daily Mississippian. 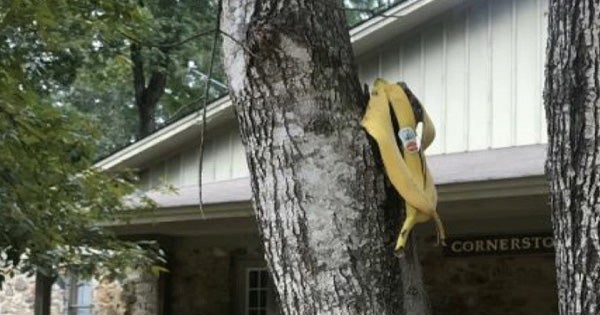 “‘Because of the underlying reality many students of color endure on a daily basis, the conversation manifested into a larger conversation about race relations today at [Ole Miss].’ Apparently, student Ryan Swanson admitted to discarding the banana peel in a tree after he was unable to locate a garbage can,” and he just tossed it up there and it got stuck in the tree. “[I]t was later spotted by Alpha Kappa Alpha President Makala McNeil, who leads one of the campuses historically black sororities.”

She just happened to be strolling along and she looked up, she saw the banana peel in the tree and had a panic attack. “The overall…” (laughing) I’m dead serious! Here’s what she said. “‘The overall tone was heavy. I mean, we were talking about race in Mississippi and in the Greek community so there’s a lot involved,’ McNeil recalled, later adding that she and her friend were ‘all just sort of paranoid for a second’ after spotting the banana [peel]. After word of the banana [peel] spread throughout the retreat, leaders decided to end the event early. Arndt,” who is the head honcho of the whole thing, Alexa Lee Arndt, “explained that she ‘felt it was imperative to provide space immediately to students affected by this incident.’

“[S]ome students left the retreat in tears, with McNeil,” who, remember now, was the original spotter. She was the first to see this threatening banana peel in a tree. She’s a black sorority babe, she’s strolling by there, saw this, and had a panic attack. She said “[s]ome students left … in tears” saying “noting that they ‘didn’t feel welcome’ and ‘didn’t feel safe.'” “Swanson apologized…” This is Ryan Swanson, the guy that threw the banana peel in the tree when he couldn’t find a trash can.

“Swanson apologized for the incident, writing in a statement that he wants to ‘sincerely apologize for the events that took place this past weekend. Although unintentional, there is no excuse for the pain that was caused to members of our community,’ he continued. ‘I have much to learn and look forward to doing such and encourage all members of our community to do the same.’ While it is unclear how the university will proceed to handle the incident, Vice Chancellor for Diversity and Community Engagement Katrina Caldwell noted that she will be speaking with fellow leaders to decide ‘what makes the most sense'” going forward. Well, are they gonna stop serving bananas? Even if they do replenish things lost by “humidity.”

But is somebody gonna call the Southern Poverty Law Center and get them involved?

RUSH: If you’re watching on the Dittocam, that’s it. This is where the Ole Miss Greek life weekend was taking place. All the sororities and fraternities gather, and they were preparing for an event, Greek life retreat.

There was a student by the name of Ryan Swanson, he was walking through, he was eating a banana. He finished it and he couldn’t find a trash can to throw away the banana peel, so he tossed the banana peel and it ended up there on the trunk of a tree. And then an African-American sorority chieftain came strolling by and saw it and had a panic attack and reported it to the Greek life authorities.

They ended the event because the sight of the banana peel in the tree caused such trauma and such discomfort. After word of the banana spread throughout the retreat, leaders decided to end the event early. The leader, Arndt, explained that it was imperative to provide space immediately to students affected by the incident. Meaning the trauma was such they needed an alternative space.

They couldn’t stay there because the sight and trauma of the banana peel was such, so they had to come up with an alternative place for the students to go, ’cause they left the retreat in tears, noting that African-American members of the Greek life retreat didn’t feel welcome nor safe any longer attending the retreat. And that is the photo if you’re watching the Dittocam. We’ll also get this photo up at RushLimbaugh.com, so if you’re not watching the Dittocam, you’ll still be able to see it at our website.

Unbelievable. I was asking Snerdley, “What is it about a banana peel anyway? What’s the deal?” You know what he told me? Know what he told me? He said, “Well, it’s because apes, gorillas, monkeys eat bananas.” I said, “So what?” He said, “Well, apparently the black Greek students walking through there got it in their heads that somebody else thought that –” I said, “Are you kidding me? This is the only way this thing could thought to have been racially –” Assured me it’s the only way.

I realize many of you are gonna think, “This is bogus, Rush, you’re falling for a scam.” No. It’s our old buddies at Campus Reform, and that’s the photo. You saw the photo. Switch it back on there, Brian. Banana peel versus me, six of one, half dozen of the other. I totally believe it. I totally believe the event. I believe it could happen.

This is exactly the kind of sensitivity and weirdness and oddity and political correctness that students have been conditioned to expect and be traumatized by. So there you have it.