Do We Need TSA-Style Checks at Hotels?

CALLER: How you doing? Thanks for taking my call. I’m gonna be quick with my point. More of a concern, really. What do you think of the idea of maybe like a checked bag for hotels? I mean, they essentially, assuming there is a bellhop —

RUSH: You mean like metal detectors to check into a hotel room?

CALLER: Yeah. Right. They essentially rolled his luggage up to the 32nd vantage point for him. I mean, how long before we start seeing a TSA —

RUSH: Wit. Whoa, whoa. Wait a minute, now. Do we know that a bellman was involved in taking the guy’s luggage up to the room?

CALLER: No, sir. I should probably retrace that. But I mean it’s just kind of a weird point that this guy could haul up, what, five guns?

RUSH: What if the guy put the gun disguised in a bag of golf clubs?

CALLER: Well, then probably shooting tar. Anyway, that was my point. I was just curious what you thought about that.

RUSH: He’s asking the question, do we need a TSA type screening operation for people checking into hotels? Should you have to be felt up, you have to take off your shoes, no toothpaste, whatever the restrictions are, should you have to go through a thorough check of your luggage and you before you are allowed to check into your room or suite? (interruption) Where overseas do they have that? The Philippines. Okay. Philippines. You’ve had your luggage checked going into a Philippines hotel? Okay.

Well, if they do in the Philippines then, I mean, how can we not? But, you know, something’s gonna happen. They can’t mount, they can’t post guards for every room and window in a hotel, every rooftop. These kinds of things do trigger a response from law enforcement.

CALLER: It’s an honor and a privilege to finally get through to you. I’ve listened to you for years daily.

CALLER: I have a comment on what happened in Las Vegas.

CALLER: The sheriff of Clark County, Las Vegas, his comment on this could not have been presented.

CALLER: It was very disappointing to hear. I believe with today’s technology and being in munitions in a plant myself for 25 years, running a munitions plant, that the amount of long guns and ammunition that the media made it sound like this guy had taken to his room that, with all the cameras and the technology we have, this couldn’t have been done in one trip. That guy was there for three days. He had to make multiple trips with heavy luggage. I mean, it had to be somehow apparent if he was on a camera with facial recognition and was seen over and over again bringing in more and more stuff, this had to be multiple trips he made to get all that up there. It was just disappointing to hear the sheriff say that this could not be prevented.

RUSH: You think that alone should have aroused somebody’s attention, that this guy doesn’t stop taking luggage up there. I’m sure you’re thinking they’ve got cameras in the hallways of the hotel and this activity of just loading whatever he had into his room off the elevators could have been seen? 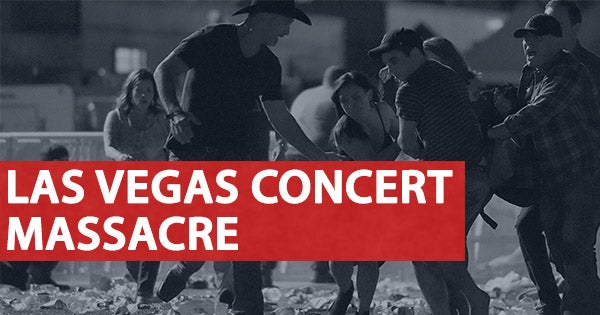 CALLER: Yeah. I mean, it would have been a repeated process of him repeatedly bringing things in, unless someone was helping him —

RUSH: In a circumstance like this, where let’s say he was under surveillance. Let’s say you’ve got the security people at the hotel, and we know that casinos are overrun with cameras, so somebody paying attention, this guy didn’t arouse any attention, but let’s say it did, why should they assume that in this big collection of luggage is ammunition and weapons?

CALLER: Well, I’m not saying that somebody is monitoring him. Computer data can be monitoring him. Computer data could throw up a red flag that this guy has been in and out so many times with all this luggage, goes in with luggage, out with nothing, in with luggage. You see my point? The way technology is these days, that he could have been red flagged by a computer, not by a person.

RUSH: Well, but the red flag — that would have all had to have been written in in the security system. If you want security to be flagged with repeated numbers of luggage entering the same room, you’re gonna have to write that and have it for technology to trigger it, other than to have, you know, a human being or a series of them with eyeballs on every camera watching everything that’s happening at every minute.

But for that you’re gonna have to make assumptions. You have to sit there and assume, okay, one day we’re gonna have a guy get in here with a giant bunch of ammunition and a weapon, so we’re gonna program into our security system a notification and an alert when we think this is happening. Somebody’d have to think that way. I’m not saying it could easily be done, but somebody would still have to think of that in order to write the code that would trigger that kind of alert.

But still, despite that, Dan here is alarmed that the sheriff is saying it could not have been prevented. He obviously thinks that it could have been or future events like it could be. Look, folks, I’m not gonna mention specifics because I don’t want to ever be responsible for giving ideas to anybody, but I’m sure if I did you would probably, “Yeah, I’ve thought of that. I’ve thought of that too. Why hasn’t something like that happened yet?”

Take this event and move it from a hotel to any other event where there is a huge crowd. And I will tell you, I have been pleasantly surprised that something like this mass, mass shooting from off site has not — everybody’s looking for bombs and sniffing for explosives. I mean, there are a lot of events out there where people are just wide open targets. As I say, I’m not gonna mention them and I don’t want to be accused ever giving anybody ideas.