RUSH: Well! I have just stumbled across something that’s a little interesting to me here. That combines a couple of issues. That otherwise would not be related. Happy to have you here, my friends. It’s Rush Limbaugh and the most listened to radio talk show in America, the EIB Network, Limbaugh Institute for Advanced Conservative Studies, Anti-Leftist Studies, and Anti-Media Studies. No graduates, no degrees. The learning never ends. It’s 800-282-2882 if you want to be on the program.

Okay. I wasn’t gonna mention this until we had finished or completed our discussion of the event in Las Vegas. However, I’m going to mention it. There is an NFL game tonight, the Washington Redskins and the Kansas City Chiefs. The Chiefs are the undefeated team, and the Redskins are playing much better than anybody forecast. ESPN had announced that they were not going to televise the national anthem.

You should also know this, that John King, CNN, yesterday said that he knows for a fact that the owners and the NFL know full well ratings and attendance are down because of Kaepernick. They know it. They are denying it in public but they know it. There was an incident in Baltimore. The Steelers and Baltimore that I can’t wait to get into, but it’s not time yet. But in light of what happened in Las Vegas, ESPN has changed its mind and has announced that they are going to televise the anthem.

They weren’t gonna televise the anthem tonight, why do you think that is? I’ll tell you why that is. The partnernship that exists between the networks that televise NFL games and the league, I mean, there’s a lot of money that goes back and forth — sorry — a lot of money that goes one way, networks to the NFL. But the NFL and the networks both have a vested interest in the audience increasing, attendance going up, TV viewership going up.

So since they can’t get the players to cooperate — they would love it if the players would shelve this and just stand. Just stand for whatever it takes, a couple minutes, stand up for the anthem. Just do it. Find some other way to express your disgust and your angst and your anger at whatever social injustice you think there is. But the players are insisting ’cause they are — I don’t know who’s running the players, but it’s some leftist malcontent group. It has to be. And players that otherwise nobody would know are acquiring fame. We used to never even televise the anthem. That was a standard commercial break, up until Kaepernick, up until year. The anthem was never televised except the Super Bowl.

Now ESPN has come along: “Because of the horrific news of the shooting at a Las Vegas concert, ESPN has reversed course and will broadcast the national anthem that precedes Monday night’s game between the Washington Redskins and Kansas City Chiefs as well as the moment of silence that will take place in Arrowhead Stadium.

“It’s a reversal of course, one that reflects the network’s decision to remain nimble as far as showing the anthem during this season of Monday Night Football. It had intended to return to its new, normal practice of not showing the anthem until at least 50 people were shot to death and more than 400 injured in the shooting in Las Vegas.”

Why does the media support the displays of protest? The media loves this. You have to understand. Sports media, news media, they love the players who kneel, who sit, who do not stand for the anthem. That’s news. Ah, we have some people protesting America. That’s news to the news media. They love it. They eat that up. Because in their world everybody has these grievances. In their little bubble of a world, they don’t think the players are outliers. They think the players represent a majority ’cause that’s how the media themselves think. 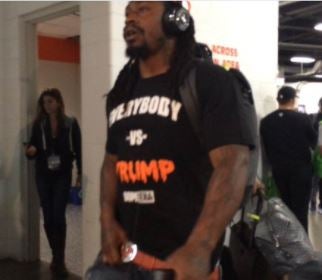 “Rush, come on. There’s gonna be a moment of silence, first responders, honoring the dead.” Yeah, but all of that is part and parcel of what is being protested. All of a sudden now it’s gonna be honored? Why? What’s different here? No, no, no, no, no. No big deal. I’m just pointing out what I think is a little hypocrisy. I am glad they’re gonna televise the anthem; don’t misunderstand. We’ll see what happens now. We’ll see how many people kneel. We’ll see how many people take a knee, sit on the bench.

Marshawn Lynch, the Oakland Raiders — who’d they play? They played the Broncos yesterday. And when the Raiders arrived, Marshawn Lynch had some T-shirt, some anti-Trump T-shirt on. And a bunch of people tried to cover him while he was walking to the locker room so nobody would see it. Raiders officials, somebody tried to shield Marshawn Lynch and his T-shirt from the cameras. Thought it wouldn’t look good.

Okay, the guy is showing it’s us versus Trump, I forget what the T-shirt said, I’ve got it here in the Stack. Yeah, yeah, that’s what it was, “Everybody vs. Trump.” But whoever it was thought, “That’s not gonna be helpful here for our guy to be seen wearing that shirt,” so they tried to cover it up. ‘Cause everybody knows this is hurting the NFL, which is the objective.