A Call from a Survivor of the Vegas Concert

RUSH: Tim in Orange County, California, get you in here quickly before we have to go. What’s up?

CALLER: Good. Hey, I just want to let you know that I was at the concert over the weekend. I was there Friday, Saturday, and on Sunday. I was on ground close to Jason Aldean near a barrier, and I saw, you know, and felt the terrifying event. I’m shaken as I talk right now. But what I really wanted to say was, you know, to me it was good people that were there — black, white, Hispanic, Asian, you name it, good people enjoying a great time, great music. Not one time did I see somebody wearing a Trump hat. Not one time did I see anybody wearing a Trump shirt. We were just there having a good time —

RUSH: How many political conversations were you having at the concert?

CALLER: None. None, Rush. It was just about having a good time and enjoying the music.

RUSH: Right. Can you hang on a minute?

RUSH: It may be a while. Somebody claims to have been there when this happened. We will continue after this.

RUSH: Now, we have somebody on the phone who says he was there. His name is Tim. He is from Orange County, California. And I want to pick up where you left off. You said you were there when the shooting began, and you didn’t see any Make America Great hats, there’s nobody talking about Trump, nobody talking about politics. It’s just a bunch of people enjoying the event, the music, whatever was going on. Is that pretty much right?

RUSH: Let me stop you there. Because that “never” in three days?

RUSH: You’re talking about at concerts, only at concerts, while the music was playing, nobody was talking politics at all?

CALLER: Not during when the music was playing, before, not outside the venue, not while we’re eating lunch there, never. And I go to a lot of country concerts, you know, there’s a lot of patriotism.

CALLER: But I never hear, we don’t talk politics there. We’re just there having a good time. These are husbands and wives and sons and daughters and little kids at this concert that were being, you know, victimized by this maniac, but it’s not about politics. It’s not. And I just felt real strongly about that. And I want to say one more thing, if I could, Rush. I was with my girlfriend at this concert and we jumped the barricade and we ran over dead bodies to get out of that place.

You know who was running in? Four police officers without tactical gear with their handguns and their rifles. They were running towards it. They didn’t know where the threat was, they could have been anywhere. So I think people should rethink their stance, those that are anti-law enforcement. And these guys were there to give their lives, and a lot of people at that concert did the same thing. They’re just good-hearted people. I was unhappy. I wanted to share that with you.

RUSH: I’m glad you called. I’m glad that you found your way through here and were able to get through. I’ve seen the observation made about the law enforcement people and the first responders, running toward the action, just like what happened at 9/11, they ran into the towers —

CALLER: You know, the last two days have been kind of a blur, you know, and lack of sleep and just dealing with what I witnessed. But I did read a couple of articles — I don’t remember exactly where, where I had heard somebody referencing country fans, I think it was a comedian or two referencing the country fans as being Trump supporters, so in a way it wasn’t that big of a deal or we deserved it. Something to that effect. And it really, really bothered me. You know, I happen to be a Trump fan, but you know what? I love America first. It has nothing to do with politics for me, man. These are good people who did not deserve to get shot or terrorized and killed. Simple as that.

RUSH: Well, no innocents ever do. I mean, it goes without saying. I’ll tell you who you’re thinking of, and we almost broke this news yesterday. It was a CBS vice president legal counsel. She was not involved in the television network. Her name is Geftman-Gold, that’s her last name, hyphenated, Geftman-Gold. She had put on her Facebook, she called Republicans “repugs,” short for repugnant. And she criticized some of the victims as Republican gun-toters who did not deserve sympathy.

Her first name is Hayley. And she wrote on Facebook she had no hope that Republicans would ever take action and do the right thing if they didn’t do anything when children were murdered. She’s probably talking about Sandy Hook. She went on basically to say these people deserved it. They voted for Trump, they deserved to get shot. Now, CBS, to their credit, fired this woman in an instant. But what do you take away from that?

CALLER: Rush, that’s exactly what I had heard. That was really my reason for calling you. I just didn’t recall her name. All I would say is, you know, how dare she? You know? We were like fish in a barrel to this guy. We were innocent people. It just disgusts me that people politicize this right away. And I’m offended, and I think every country western fan out there is offended. I just wanted to share that with you. Man, I’m praying for the families. I’m praying for the injured, those that were killed, those that witnessed this horrible, horrible — 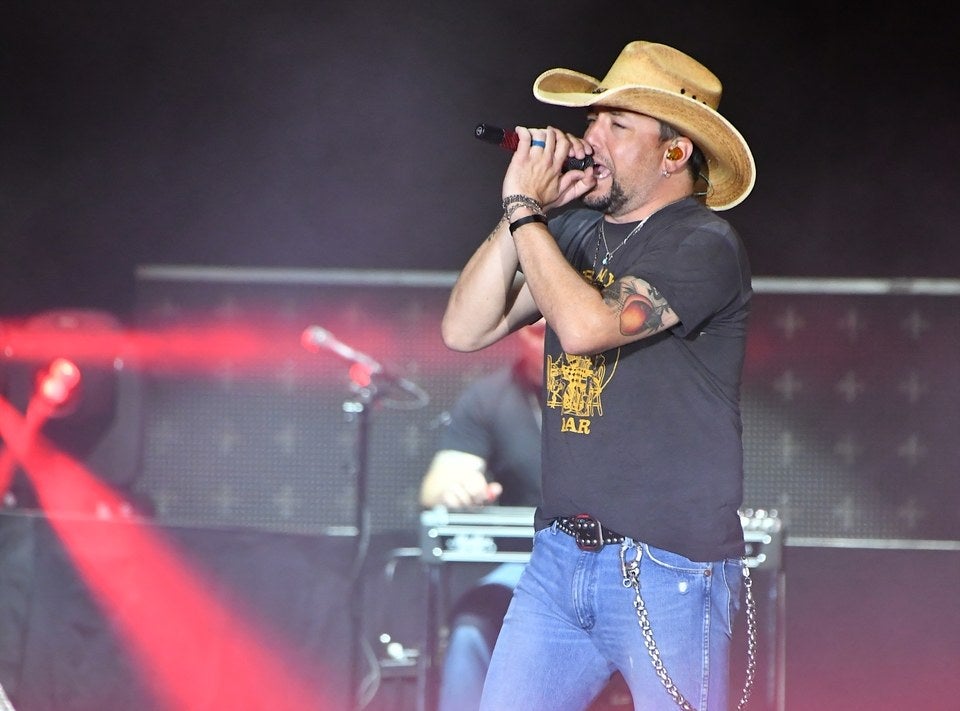 RUSH: You know, we read about this and we see the video after the fact. We see Jason Aldean on stage not knowing what’s going on. A lot of fans think the noise they heard was part of the act. They think it’s some super techno effect that’s been added so they don’t move at first. It isn’t ’til they start seeing people get hit and mowed down that, holy smokes, and start getting out of there.

I don’t know how you recover from this as quickly. You were there in the center of a massacre. You barely got out of it, 500-plus people wounded, 59 people, not counting the shooter, dead, you’re back home in southern California, it’s not that far away, but, man, we read about this or see it from afar and we react to it as such, but being in the middle of this had to be, I don’t know, traumatic.

CALLER: Rush, I can’t even describe it. I mean, it was the scariest thing that I’ve ever been involved in before.

RUSH: Did you ever know at any point where the fire was coming from? 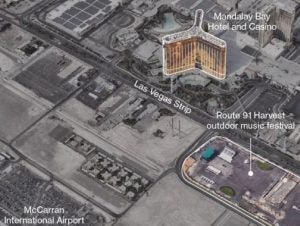 So everybody, you know, got on top of each other. And I was waiting for someone to put their gun over the barrier and start killing us. You know, so there was never a thought to looking at up at Mandalay Bay. And then when people started getting hit and the bullets were raining down on us, it was kind of a free-for-all, saving each other, and getting out of there.

RUSH: Running faster than you ever had in your life, probably.

CALLER: It was terrifying. Absolute —

RUSH: Was there ever a moment where you thought I might have been safer just to stop and get as low as you could, or was the instinct to get out of there?

CALLER: Well, no, not for me. I mean, after the second round and I saw a couple people around me get hit, the barrier that was in front of me was probably 10 feet from me, I grabbed my girlfriend, I jumped the barrier. I pulled her over. I stayed low but I kept running. We didn’t know where the threat was. We thought they could be all over the place there, and we got separated, but she was safe, thank God. And I just ran out of the venue, like I said —

RUSH: Where did you stop running? How far away were you when you stopped running or where were you?

CALLER: Well, there was a hotel next door, there was a Hooters hotel next door. I ran in the casino there, and every employee there was gone. So everybody there from the concert was in there ducking and hiding. I didn’t want to stay inside there without any security, without any police, so I ran outside a back door. I don’t remember the street. I believe it was Tropicana. I just ran. And a few people ran with me and we just kept running. I was in touch with my brother who, you know, was keeping me updated on what was going on, ’cause I didn’t know if there was one shooter, two shooters, 50 shooters.

RUSH: So you didn’t know it was the Mandalay Bay was where the shooter was. Were you running away from that or towards it?

CALLER: Well, I definitely sensed, based on where the bullets were ricocheting and flying by me and hitting people, I could sense that it was coming from that direction, so when I got to the street, I ran away from it. I ended up running a couple miles down to the Thomas & Mack Center, where there was a huge law enforcement presence.

RUSH: When did you meet up with your girlfriend?

RUSH: That had to be nerve-wracking all those hours you don’t know where she is on what her condition is.

RUSH: At any time in the middle of this or in the aftermath were you cursing the NRA?

CALLER: Never thought about that.

RUSH: No, folks, I’m asking this question on purpose because it’s the first thing the left thought of, and the NRA’s got no culpability here. The NRA had nothing to do with this, and yet they have become the target now. So I’m just asking, you were there, did you ever think, damn the NRA or anything of the sort?

CALLER: No. I thought damn that shooter or shooters. It’s the person, not the guns, and it was just a deranged psychopath, and hopefully they’ll get to the bottom of it. I guess that was a secondary thought. My first was with all the victims.

RUSH: Well, Tim, I’m glad you got through. I appreciate your answering questions.

RUSH: What was the closest you were to somebody who was hit and injured?

CALLER: You know, it’s probably, I don’t know, three feet. There were two people that were hit right in front of me. And then about 15 yards away there were several more people that were hit. And when I jumped the barrier, there was a deceased security guard with a head wound who was probably 19 or 20 years old making 10 bucks an hour.

CALLER: Rush, no. Obviously I never want to see it again. I’m seeing it every second of the last few days in my mind. You know, never did I feel or witness what I have seen. I can’t even describe how awful it was. And I’m so thankful that myself and my girlfriend made it out of there, but I’m so hurt by, you know, all the victims. But, no, I can’t even describe it, Rush. It was just terror.

RUSH: Tim, I’m glad you called, and I appreciate your getting through. Thank you very much for putting up with our questions.

RUSH: Best to you. That’s Tim. He is in Orange County, California, and was there during the event in Las Vegas.