RUSH: You know, I have to tell you, sometimes it’s fun to watch Fredo Cuomo on CNN. Fredo has stumbled across a piece of news that has him totally confused, and that is that a law enforcement official has said that the gunman wired $100,000 to the Philippines before his shooting spree. And so Fredo is asking a financial expert, “How could a guy with such a dark heart send money to people in need or whatever in the Philippines?” I guess Fredo knows that the money was not to retire gambling debt to Philippine credit holders but rather was to Filipino charities? I have no idea. But how could a guy with such a dark heart — Will we finally get — by the way, greetings. Welcome back. Rush Limbaugh here at the EIB Network. 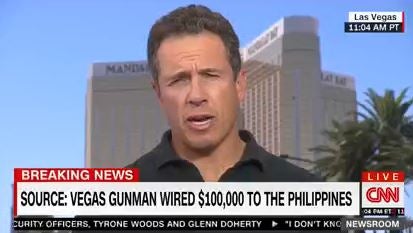 So we’re gonna get an explanation at some point, somebody with the air of authority and credibility is going to tell us as best they have been able to determine why Paddock did it. How many of us are gonna believe it? How many people are gonna believe what they end up telling? Well, it depends on what it is. But they’ve ruled out any form of international terrorism. In 36 hours, they have poured through everything they got, and they can conclusively tell us that this guy had nothing to do ISIS, even though ISIS is doubling and tripling down trying to take credit for it.

We’re still a year into the Trump-Russia collusion investigation, and despite no evidence whatsoever, after a year they still will not tell us that there was no collusion between Trump and Russia. They keep investigating it. But this they’ve got it pretty down pat. So if it wasn’t any of that, then what was it? And I’m not gonna comment ’til they tell us what the motive is.

At some point they’re gonna have to. But you can get an idea where they may be going by uncovering this news that he wired a hundred grand to the Philippines. By the way, if there’s a reason for that. I haven’t heard it. Have you heard why? So I don’t know why Fredo is assuming it went to charities, rather than paying off gambling debt.