Now, you know why this is? We knew it on day one, and we told you, but it took these yokels a little while to figure it out. It is the elimination of deductibility of state and local taxes that is the that is gonna cause a lot of people’s taxes to increase, no matter what happens to their income tax rate. That’s right. And there are now headlines all over the Drive-By Media, “Republican Tax Plan Contains Increases for Middle Class.” Drive-Bys love writing that headline. 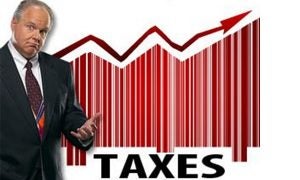 No, the rates aren’t gonna go up. It’s the deductions that they are getting rid of that will effectively result in people paying more dollars. What are you are frowning at? You disagree with my analysis here? Oh. Snerdley is ticked off at that. Well, you knew when state and local income tax deductibility is gone — (interruption) no, the mortgage interest, no, they’re not getting rid of that. The home mortgage interest deduction remains.

Charitable deductions survive. You’ll still be able to deduct whatever you give to charity, yourself not included. You do not get to consider yourself a charity even though many people think of themselves as one now.