RUSH: I want to switch gears here. Puerto Rico has been on the back burner even though the president has been there. The Drive-By Media who have been reporting on this are nevertheless reporting that Trump’s botched it, that Donald Trump doesn’t care, because most of the people down there are not white. 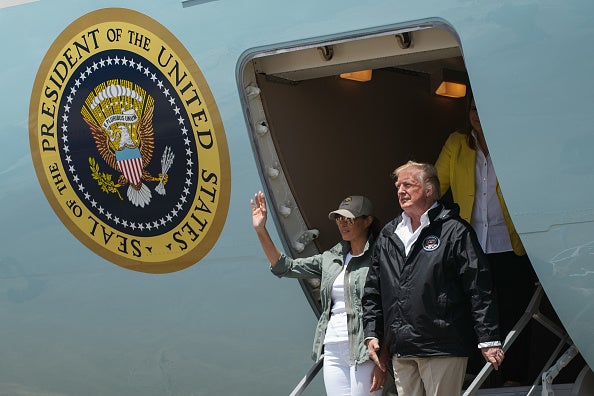 He was on with Fredo Cuomo today on CNN. Mick Mulvaney has been talking about and Trump’s been talking about all the fake news about Trump as not caring and all the other BS the media has been reporting out of Puerto Rico. And Fredo said, “What’s fake about our reporting, about the depth of despair and the need for relief? What’s fake about that?”

MULVANEY: All y’all show is the bad stuff. We spent several hours on the island yesterday afternoon. Got a chance, for example, to get briefed by the U.S. Army Corps of Engineers. The folks working on the electrical grid. And, by the way, some of the efforts down there are absolutely fantastic. We met with mayors of large and small towns. There’s a lot of good things happening. I think the president’s frustration, our frustration as an administration is the media seems to only want to focus on the bad things and not show both sides of the story. I think that’s a fair frustration to have.

RUSH: Now, Fredo, really these kinds of complaints do not register with Fredo. It’s hard to describe the single-mindedness of most in the media, and it’s hard to describe the lack of curiosity they have for anything other than what they think or what they believe. But I’m telling you, they don’t have any curiosity. There isn’t validity to anything they don’t already believe or think they know. And so when Mulvaney comes along, “You guys are only telling half the story. You guys are engaging in fake news here.”

And so somebody comes along, “You guys aren’t telling the whole story.” Fredo is genuinely shocked. He doesn’t think there is anything else. Fredo, you’ll not find him in the leadership of this where they define the leftist agenda. He’s a foot soldier, a loyal foot soldier who wants to impress management and the leaders. So whatever he picks up on that they care about, that’s all there is. There isn’t another side, there isn’t an alternative, and they’re not making anything up. So I want you to understand that as you listen to their conversation continue.

CUOMO: What two sides to the story? The need is real.

RUSH: Wait a minute. Stop the tape. See what I mean? Recue that. What two sides of the story? I love this. Did I not just say — I knew what was coming next but I had not read the transcript, folks. This is an example of how I know these people better than they know themselves.

So he says here, “What two sides of the story? The need is real. The distress is real.” That’s the only thing that matters in Puerto Rico, people are hurting, people are suffering, they’re in distress, and Trump doesn’t care, and Trump doesn’t do anything about it. As far as he’s concerned, that’s it. There is nothing else. The jet, the airline, it’s still missing. There isn’t any other side to that. So here it is again, now that you know, here’s the whole exchange.

CUOMO: What two sides to the story? The need is real. The distress is real.

CUOMO: We are showing the efforts. Because of the rhetoric out of this White House, we’ve spent a lot of our time talking to first responders who are saying, “Why do you say we’re not working? Why do you say that we’re not down here to help?” Nobody has reported that, Mick, and it’s dangerous to do that. Not only is it a distraction…

MULVANEY: …let me answer your question.

CUOMO: It makes people not believe the need…

CUOMO: …Mick. But I want to make sure the context is right. The need is real. That’s not just the bad stuff; it’s the reality, Mick.

MULVANEY: Y’all have put up a stat that says only 7% of the island has electricity. That’s absolutely accurate. But what you don’t report is how it’s being done, why it’s being prioritized. The focus is on getting power to hospitals, to water filtrations and pump houses, nursing homes, old age retirement homes first. That story simply doesn’t get reported at all. And I think that’s at the root of the frustration.

RUSH: That’s an excellent point. See, to Fredo, only 7% of the island has power. That’s horrible, that’s bad, that’s rotten, oh, my God, there’s despair, there’s people suffering, and you can’t tell us not to report it because that’s real, that’s all that’s real. The only thing that matters to the news is suffering. That’s all we do. We find suffering everywhere that we can blame on Republicans. We find despair everywhere that we can blame on Republicans and Trump and that’s real and we report it and that’s real and you can’t deny it.

He’s maniacal about this. And Mulvaney says you’re not telling how that 7% happened. You’re looking at 7% as a negative and we’re looking at it as recovery and a positive and here’s why we’re doing it, where we’re doing it first. I guarantee you Fredo was clueless hearing this, because nobody prior to Mulvaney had even explained this to him. And I dare say, had they tried, he would have thought they were trying to manipulate him and get him to not cover the despair.

Mulvaney says we’re not denying the despair, Fredo. There are people here working around the clock to bring it all back and you’re making it sound like nothing’s happening. And I guarantee you that doesn’t compute with Fredo. ‘Cause he’s stuck on the despair and the misery and the suffering and it’s Trump’s fault. And that’s what they’ve gotta keep drilling home. He says so. There’s one more exchange, but I’ll get to it after this.

RUSH: You gotta hear the next and last sound bite.

Mick Mulvaney, OMB, and Fredo Cuomo. Fredo doesn’t like it here when Mulvaney enrages him by telling Fredo that he’s sure that CNN will do a better job going forward.

CUOMO: When there are people coming up to you on the streets begging for help, you don’t say, “Well, you know, things aren’t as bad as you think, my friend. Could have been Katrina. Imagine how bad they had it.” That’s not what you do in a situation like this. You report the reality. And it’s not being done to you, Mick, to the president, to embarrass you. It’s just being able to reinforce the need. Whatever’s being done, it’s not enough, Mick.

MULVANEY: Well, the good news is that you’re clearly gonna do a better job going forward, and we appreciate that.

CUOMO: We couldn’t do any better job than we’ve done so far. CNN has been down there like an army of ants from the beginning trying to show the need.

RUSH: So they’re obsessed. They’re obsessed with “It’s bad, the suffering is horrible, the need is not being met, it’s bad,” and he does mean it’s your fault, Mick, and it is your fault, Trump. They would never report this kind of suffering and need when Obama was in the White House, folks. They would only focus on how great the effort was to alleviate it, which is Mulvaney’s point.