I said, “What?” I don’t know if they did it in an editorial, but there is an op-ed piece by Bret Stephens, noted conservative columnist who moved over to the New York Times from the Wall Street Journal. Remember his first piece almost resulted in him being killed by New York Times readers? He made a reference to global warming as a hoax or something that’s been totally misreported, and the New York Times readership had a collective hissy fit and started questioning why he was even hired. The pooh-bahs at the New York Times had to write excuses and reasons why he’d been hired and tell people they’re interested in an open, free exchange of all kinds of ideas, which isn’t true.

Now, that isn’t going to happen. And there’s some things in here that are in conflict with some information that we have passed on earlier this week. For instance, the opening of the column. “From a personal-safety standpoint, more guns means less safety. The F.B.I. counted a total of 268 ‘justifiable homicides’ by private citizens involving firearms in 2015; that is, felons killed in the course of committing a felony. Yet that same year, there were 489 ‘unintentional firearms deaths’ in the United States, according to the Centers for Disease Control. Between 77 and 141 of those killed were children.” 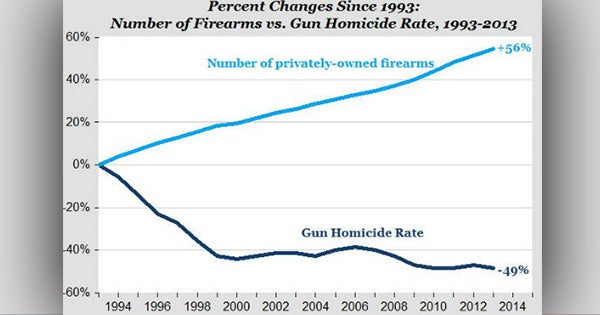 This is all off the map because I’m reading that there are 33,000 gun deaths every year and that two-thirds of them are suicide. And we have that chart that comes from the American Enterprise Institute that tabulates the sale of guns since 1994 and shows that gun sales have increased by 94%. In that same period, homicides by guns — this is not suicides; this is murder. This is what the left thinks happens with every gun death, that it’s a homicide, somebody shoots somebody. Those numbers are down 49%.

I haven’t seen anybody dispute those numbers. They’ve been out there for a while now. AEI, the American Enterprise Institute, is a reputable think tank. So we have a bit of conflicting data here. Stephens’ numbers are nowhere near 33,000 a year that is bandied about, and you need that number if you’re also gonna try to fallaciously claim that there are more gun deaths every year in America and that the total is now greater than all of the deaths that have happened in all of the combined wars in American history.

That’s a stat that we mentioned yesterday that can also be refuted because it’s very misleading. Two-thirds of gun deaths are suicides. They’re not murder; they’re not homicide. And gun control, there’s no new law that would stop that. There’s no new gun regulation that would stop that, which is Stephens’ point. All these little regulations everybody’s talking about, this new law, that new regulation, do that on bump-stocks, don’t do that, he says it’s nothing. Not accomplishing anything except making people think you care. If you’re really serious about this, get rid of the Second Amendment. I think his point is that nobody’s really serious about it. 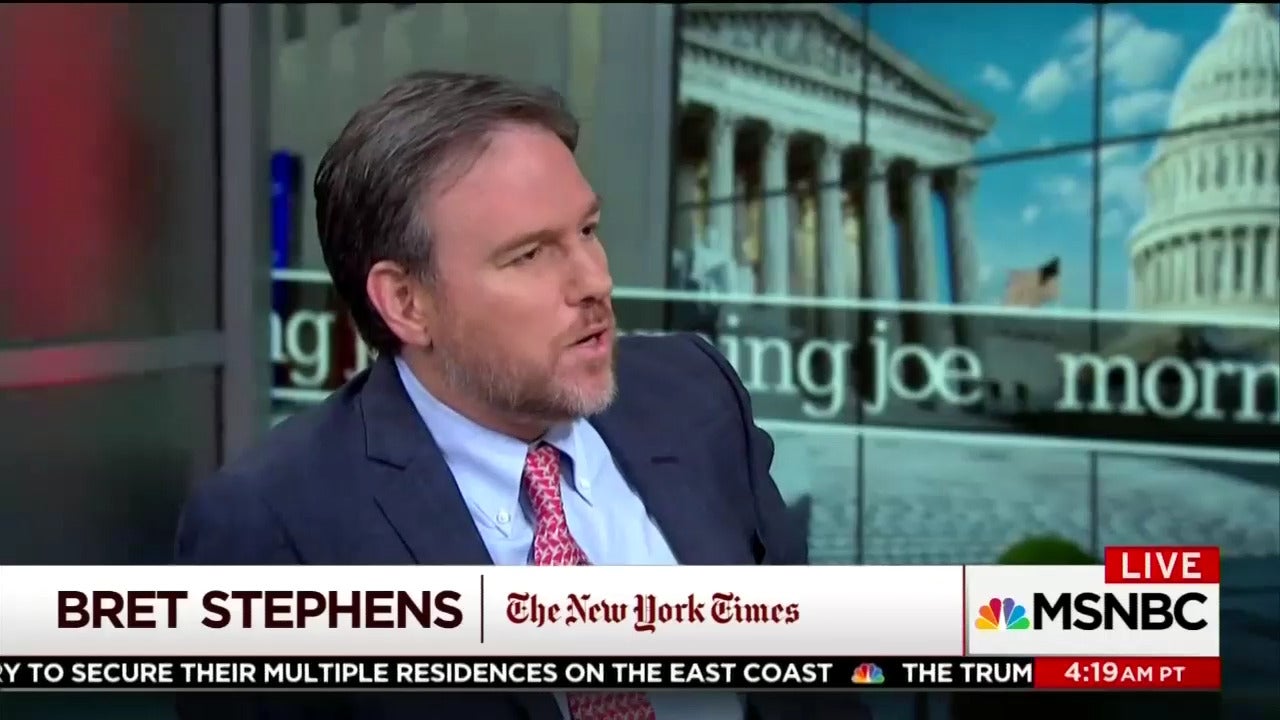 He cites law enforcement officials who claim that more guns equals less safety. Not according to the numbers that we have been using this week. I have no vested interest in any of this other than accuracy. So if these numbers that AEI is using are not true, I would want to know that, be able to retract them. But I haven’t had anybody refute that. And in fact it makes logical common sense.

But homicides are a specific area. And when talking about homicides, the number of gun homicides are down almost equal to the number of new guns sold since 1994. He also takes on Jimmy Kimmel here a little bit. He says: “The National Rifle Association does not have Republican ‘balls in a money clip,’ as Jimmy Kimmel put it the other night. The N.R.A. has donated a paltry $3,533,294 to all current members of Congress since 1998, according to The Washington Post.”

By the way, the amount of money donated to Democrats by unions dwarfs the amount of money donated by the NRA to everybody. It isn’t even close, folks. People are calling the NRA a terrorist organization. There are college professors — one of the Sinatra daughters is out there saying the NRA should be lined up and shot by a firing squad. Now, that’s an illustration of the hysteria and how successful it’s been created here.

“The more closely one looks at what passes for ‘common sense’ gun laws, the more feckless they appear. Americans who claim to be outraged by gun crimes should want to do something more than tinker at the margins of a legal regime that most of the developed world rightly considers nuts. They should want to change it fundamentally and permanently. There is only one way to do this: Repeal the Second Amendment.”

The point is that there’s no serious effort to do this, although I think there is. I think that’s the ultimate aim of the left. It’s like everything else. They just won’t come out and say so. They’re not gonna come out and specify their agenda. They would lose in even bigger numbers than they have been losing in recently. At any rate, Bret Stephens in the New York Times, a conservative columnist, is just one example of the thinking that is out there.