RUSH: Holy smokes. The New York Times has done it. They just ran the story detailing eight different instances of sexual harassment by Harvey Weinstein. The media and movie mogul, Miramax and Weinstein Company. And one of the women was Ashley Judd, the extreme left-wing kind of nutty actress. She was the woman that we played the audio sound bites shortly after Trump was elected, “I am a nasty woman.” Mike, see if you can find that in the archives. “I’m a nasty woman.” She was talking about part of that, you know, the vagina hat brigade that went nuts when Trump was elected.

Eight different cases that have been settled of sexual harassment. I’ve seen the allusions to this story that Weinstein was lawyering up. Now, Harvey Weinstein is a prototype liberal. I mean, he checks every box. He is pro-choice, pro-Planned Parenthood, loves Bill Clinton — this kind of makes sense there — big donor, big donor. It doesn’t matter who the Democrat is, Barack Obama, Hillary Clinton, but he is tight with the Clintons, I mean, really tight.

I haven’t read the whole story. I don’t know if there’s anything to do with the Clintons in the story. I’m just telling you they were tight when Clinton was in the White House. When the official portrait the Bill and Hillary were unveiled during the George W. Bush presidency, Harvey Weinstein, invited guest in the front row. So here you have the prototypical Hollywood liberal, and the New York Times has outed him. He’s got his enemies. This guy is I guess such a guy that even his liberalism doesn’t protect him from other liberals who resent him. This is a hell of a story. He’s hired David Boies. He’s hired all kinds of lawyers to try to keep the story out of the press. Drudge just put it there as his top-linked story. This is a huge deal because liberals don’t do this, you know; they’re perfect. It’s only thugs on the right that do this kind of stuff.

RUSH: Here is Ashley Judd. This goes back to January 21st. This is Inauguration Day. Ashley Judd is the first name mentioned in the New York Times story about eight different women sexually harassed by Harvey Weinstein, who I guess has now apologized and taken a leave of absence. Since I mentioned that she calls a nasty woman, this is it.

JUDD: I am a naaaaasty woman. (cheers) I didn’t know devils could be resurrected, but I feel Hitler in these streets. A mustache traded for a toupee. Nazis renamed the cabinet. I am not as nasty as your own daughter being your favorite sex symbol, (cheers) like your wet dreams infused with your own genes but, yeah, I’m a nasty woman. A loud, vulgar proud woman. 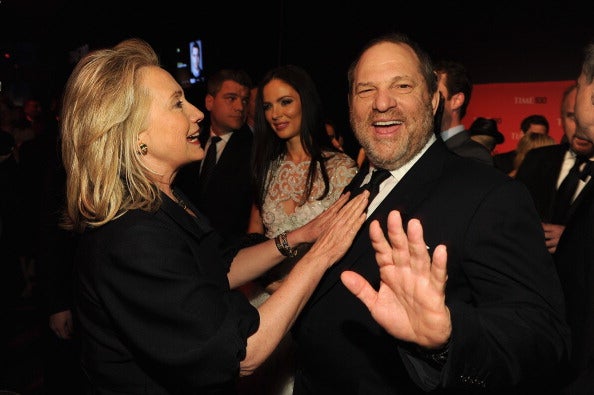 RUSH: Weinstein was staying at the Peninsula in Beverly Hills and she got a meeting, long time ago, was a budding actress. She was gonna get to meet Harvey Weinstein. She gets up there and he’s in a bathrobe and asks if he can either give her a massage or if she wants to watch him take a shower. And she said it’s Harvey Weinstein, I can’t insult him, but I gotta find the fastest way out of there. So she was sexually harassed. And Weinstein is a prototypical liberal and you’ll find pictures of him and Hillary Clinton and Bill Clinton all over the place.

This is not supposed to happen. He’s supposed to be a sensitive, liberal guy, would never look at women this way, treat them this way. And this story has been brewing. He’s lawyered up trying to keep the story out of the press. The New York Times, and I think Vanity Fair has a version of it that’s gonna run. This is gonna shock and rock the movie world.

By the way, Ashley Judd, if any of you watched the miniseries Berlin Station on EPIX season 1, season 2 is coming up. I have seen the first two episodes as a powerful, influential member of the media. Ashley Judd has a starring role in season 2.