My Response to Senator Schumer

RUSH: Here’s Chuck You Schumer. This is on the Senate floor this morning in Washington. Well, just listen. This kind of speaks for itself. See what you think. 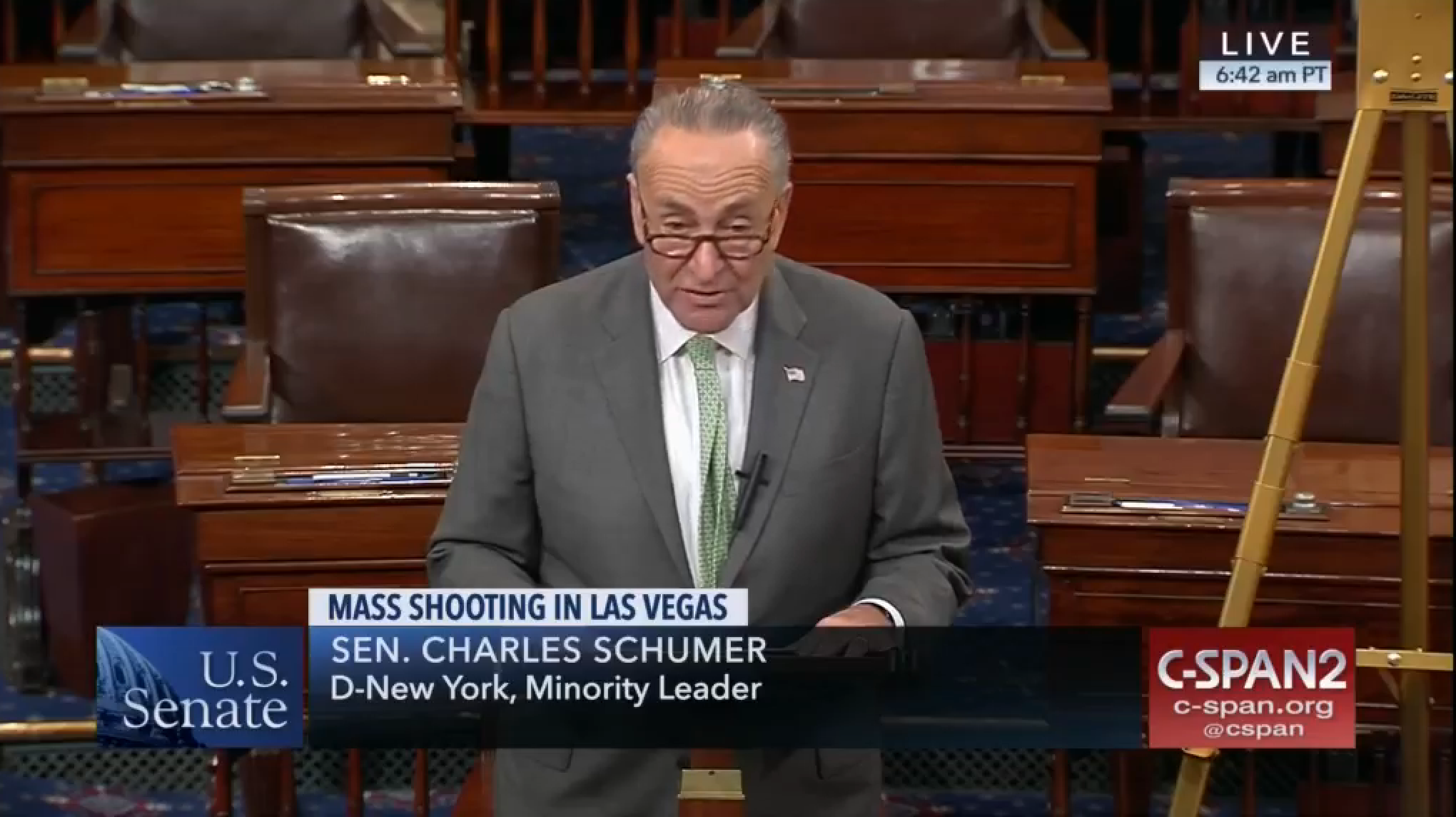 SCHUMER: If we could talk to those brave souls who were killed and are now in heaven, they would say, “Do something.” They wouldn’t say, “Let’s wait.” President Trump, are you gonna wait to hear what the NRA says first? You fashion yourself as a strong man. Well, are you gonna show that you are not beholden to anyone now? Are you gonna show your strength now? Are you gonna be the first president, Republican president in a generation, to buck the NRA? I say to President Trump, come out and say that you support and would sign a law to ban bump stocks.

RUSH: You know what I feel like doing? I feel like doing a monologue addressing all of those babies who’ve been killed by Planned Parenthood and asking them what they would be saying, if they could speak. They would be saying, “Do something. Shut down Planned Parenthood.” There are over a million abortions a year in the United States of America, dwarfing the number of homicides every year. It’s been the case since 1973, minimum. We don’t know the numbers prior, but you have to think that they’re close.

But Senator Schumer can venture to the floor of the Senate and start impugning the NRA, which hasn’t killed anybody, which does not support the killing of anybody, which does not have locations in strip malls and other public places where you can go in and enlist the help of the NRA in killing people. They don’t do that. You can’t do that with the NRA. You can do that with Planned Parenthood. In fact, the Democrat Party urges people to do just that, as they have politicized abortion.

So I’m sorry, Senator Schumer, if your plaintive plea here speaking to the brave souls in heaven and how they want Trump to ban bump stocks? I think there’s a group of people in heaven who care a little bit more than about bump stocks, Senator Schumer. Here’s Nancy Pelosi, her weekly press conference in Washington on Capitol Hill.

PELOSI: We have to act now, and we’re not going away. We’ve told the families we have to pass something, and all of this all just blossoms when something occurs, and then we have a flurry of comments from the other side of the aisle saying this is not the time, now is not the time. No, now it’s the time for a moment of silence and no time for action. 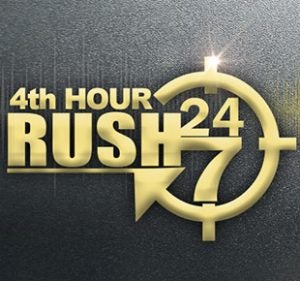 A point that I made yesterday in the fourth and a half hour broadcast — well, it wasn’t a broadcast. It was a webcast, what is the aura, what is the situation, what are the circumstances in America at the point in time of this massacre? Would you describe America as upbeat and positive and forwardly energetic? I’m talking about at large, because certainly in pockets of this country you’ll find just that, and those people probably are not watching the news.

The happiest people in this country, the most content people — probably is an economic aspect to it — but they probably don’t watch the news. As such, they are not barraged each and every day with a pummeling of absolute negativity, pessimism, and disaster. But most people are pummeled with that stuff each and every day.

So in what mood did this massacre take place? It didn’t take place in a mood of uplift and inspiration and positive, even though there are stories about how economic confidence is at a record high the last 10 or 15 years. There are a number of, if you cherry-pick ’em, polls that will show you that on balance the American people are optimistic about some things, but overall, what’s the mind-set of America?

What if — and nobody knows, and if they do know, they’re not tell us — what if this guy got caught up in all that negativity, just got plain ticked off? He’s already had some grievances. We don’t know what they are. They’re in his personal life. But you can’t escape this stuff. And not everybody is well adjusted with discipline and sanity. Some people are living on the edge out there. This guy, from what we have been told, has been planning this for a long, long time.

So maybe the current context and mood of America is not a factor, but you can’t ignore it. You’d have to say that this event took place at a time when America’s culture and society and politics are at full boil. If you’re looking for a motive, might that matter? Or is all of that irrelevant when looking for a motive? When I listen to Chuck Schumer pretending to speak to the dead and telling us that their thoughts are on the NRA, when I listen to Nancy Pelosi, “We’ve gotta do something! We have to do something!” I just have to wonder what their desire is. Because these people politicize everything.

RUSH: I wonder if Senator Schumer has talked to Prince in heaven, find out what Prince thinks about all of this. This is Prince, the bumper rotation here, 1999. And we start on the phones in Pittsburgh, the home of a bit of a contretemps going on between Antonio Brown and Ben Roethlisberger, the Pittsburgh Steelers. Dave, great to have you, sir. How are you?

CALLER: Thanks for having me on, Rush.

CALLER: I have a point here about the Vegas shooter. It seems the left does not believe in evil, unless of course you’re a Trump supporter, then you’re racist, sexist, bigot, or you disagree with the left then you’re pure evil. But even the shooter who massacred all these people, the left does not see him as evil. In fact, they’re blaming everything and everybody else.

They blame guns. They’re blaming the NRA. They’re blaming bump stock. They’re even starting to blame the hotel staff because they didn’t call the cops because he brought too much luggage in, they’re getting blamed. And the only thing that they really want is they want to find some way to link this to Trump somehow or to the right, then they can blame Trump and call him a murderer and blame him for the whole entire thing.

The left sees evil everywhere, in all the wrong places. Every political opponent of theirs is not just a political opponent. He or she is evil. And that decision is what permits the left to do anything they can to defeat them. If you’re stamping out evil, there are no boundaries, there are no limits on what you should do, not can do. And that’s how they believe it.

Folks, I just want to tell you again here, what Chuck Schumer did on the floor of the Senate today is so unprofessional, “outrageous” doesn’t even cover it. To attempt on the floor of the United States Senate, to attempt to say that if he could talk to the dead from Las Vegas, that they would be saying, “Get the NRA.” Grab the sound bite again. Here it is. Audio sound bite number 1. This is what we’re up against, folks. Here it is.

SCHUMER: If we could talk to those brave souls who were killed and are now in heaven, they would say, “Do something.” They wouldn’t say, “Let’s wait.” President Trump, are you gonna wait to hear what the NRA says first?

RUSH: Stop the tape. Wait a minute. I thought the attendees were all country western fans and that means they’re all Trump fans, so why would they be blaming Trump, Senator Schumer? Here’s the Democrat Party invoking heaven, number one, is a bit of a stretch to me. But number two, Senator Schumer, the NRA doesn’t kill anybody. The NRA does not have locations where you can go and have them kill something that you find inconvenient.

They don’t even advocate for the killing of anybody under the guise of some other right. I don’t know what you call that. I mean, if we could talk to those brave souls who were killed and are now in heaven, they would say, “Do something” to President Trump and “do something about the NRA.” Grab sound bite number three. The insanity continued last night on The Tonight Show with Jimmy Fallon. Hillary Clinton. 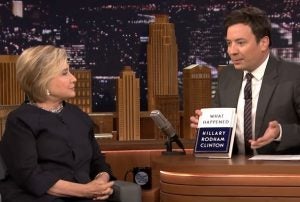 HILLARY: I can’t believe that one whole political party in the greatest country on earth is totally sold to the gun lobby and will do whatever they are ordered to do, despite the loss of life. I mean, one of the first things that, you know, Trump signed as president was to reverse President Obama’s order that people with serious mental health problems should not be able to buy guns. And so he signed it, and aren’t you happy that people we already know who have mental health problems can now buy guns.