RUSH: You knew the next thing that was gonna happen, bump stocks, the minute it was learned that the perpetrator here was using bump stocks to convert his semiautomatic rifles and guns and so forth to automatic, you knew that it wasn’t gonna take long before somebody in Congress or the Senate was gonna move forward and suggest a new law banning bump stocks. And that has happened. Senator Dianne Feinstein of California has filed a bill to do just that. 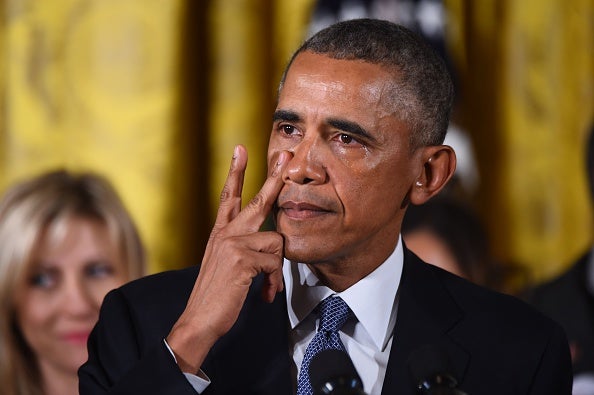 You have all of these leftists out there — and, folks, I’m sorry. We must categorize and define the people who are saying what they’re saying because they have something the common. Leftists have a view of this, the nonleftists have a view, the leftists are all now demanding we get rid of bump stocks. And the Republicans, as predictable, have members saying, “You know, we’ll talk to you about that, we’ll talk to you about bump stocks. Yeah, we can’t find a legitimate reason for bump stocks, yeah. Okay, fine, you want to talk about that?” Republicans remain eager to cross the aisle and show that they are willing to work with lunatics rather than stand up to ’em.

Here’s what nobody is talking about. The bump stock green light received approval from the ATF during the Obama administration. The Obama administration authorized bump stocks. That’s not supposed to be possible. Obama was supposed to be the one that was gonna get rid of the Second Amendment. Obama supposedly, ’cause he’s a good leftist, a good liberal, he wanted to take guns away. Are you telling me that it was the Obama ATF that authorized bump stocks? Yes. Yes, Matilda, it certainly was.

One of the problems that people have with bump stocks, people that use them, is they cause rifles to jam because the rifles are not intended to be fired this way, and if they don’t jam, they can overheat. If either happen, you can’t use the weapon. Now, we know that Paddock stopped shooting on his own. He may have had to because his bump stocked rifle jammed or overheated, if in fact he was using one.

Did you hear when Tim Kaine said? Tim Kaine with an asinine theory that Paddock stopped shooting because he didn’t have a silencer. I watched the video, the body cam video that’s about three minutes long. It’s eerie, it’s chilling, you see this stuff on TV. You know it’s not real watching it on TV. But every time you hear the gunfire on that video from the body cam of one of the cops in Las Vegas, you know people are being mowed down.

It’s just chilling. It’s just terrifying. And 30 seconds would go by and then it would ring out again and go for 15 or 20 seconds and stop, and everybody would run and it would come again. It was chilling. You couldn’t see much, but you didn’t have to. Just hearing it and knowing what was happening was chilling enough as it is.

RUSH: This is Kerry in Tampa. I’m glad you waited. Your turn. Hi.

CALLER: Hello, Rush. It’s an honor and a privilege. Thanks for having me on.

CALLER: I’ll be quick. Now, just to start out, I am a conservative, I’m a Trump supporter, I’m an NRA member; but I think this whole bump stock ban proposal could end up being something Trump could use, and let me tell you how real quick. I would call Dianne Feinstein, and I’d call her into a meeting, and I’d have her bring Chuck and Nancy.

I’d probably even have him bring that little Pencil Neck Schiff in with ’em too for a media opportunity. And I’d talk about how he supports this bump stock ban and how since 2010 it’s used among MS-13 members and Chicago gangs have proliferated. And that it’s sad that President Obama and his ATF approved the use of those bump stocks back in 2010, but he’s here to (unintelligible)

RUSH: Oh, so you want Trump to call a meeting with Chuck and Nancy and say that to them?

CALLER: I would talk about the Obama part after the media was there and make sure everybody’s got the grin on their face that they’ve won.

RUSH: And what do you think would be the outcome of this? What would be the objective? Your strategy here, what is it meant to achieve?

CALLER: Well, to call out the Obama administration to be at fault for the whole bump stock usage in the first place.

RUSH: Right. That’s true. That did happen in the ATF with Obama.

RUSH: I was telling the audience what you say is true. That did happen under the Obama administration —

RUSH: So this is your way of having Trump throw all this — they’re out there raising hell about the bump stock, and you want Trump to call a meeting and agree with ’em, and say, “Yep, this bump stock thing is a problem. You guys gave it to us.”

CALLER: Yeah. Absolutely. Use it against them. We’ve gotta fight these people from the inside out.

CALLER: I don’t think the bump stock — in my opinion, it’s not a big deal.

RUSH: So no big deal if they outlaw bump stocks?

RUSH: Okay. Fine. So here we have an NRA member, an avowed, courageously self-claimed conservative and a pro-Trumpist claiming that what Trump ought to do is call their bluff. They want to get rid of bump stocks, make a public display out of a meeting. 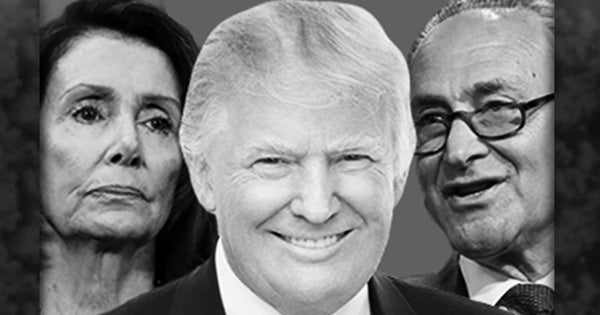 He loves Chuck and Nancy anyway, so call ’em into the White House, have the media there, have cameras there and have Trump say, “You know what? I agree with you. And I don’t understand how you people let this happen. This bump stock thing goes back to the Obama administration in 2010, whenever it was, and I can’t understand how your party ever allowed this to become law in the first place. But I’m more than happy to agree with you that we ought to get rid of bump stocks.”

Now, I’ll tell what is behind that strategy. Thank you very much, Kerry, for the phone call. This is a great illustration of how our enemy is the media. His whole strategy here is to stick it to the media, and secondarily to Democrats. But old Kerry is like everybody else. They’re watching all this and they’re watching the media talk about things they don’t understand. And they’re listening to all the bias, and they’re hearing all the absolute caca that the anti-gun crowd is routinely bringing up, blaming the NRA, blaming NRA members, accusing them of murder saying they should be lined up and shot at a firing squad. So Kerry here wants everybody to know what a bunch of phony baloney, plastic banana, good-time rock ‘n’ rollers they are.

And he’s willing to give up a certain aspect of gun law, the legality of bump stocks, in order to stick it to the media and then secondarily to Democrats, because what Kerry wants is for the American people to know that the only reason bump stocks are out there is because Barack Obama and the Democrat Party.

Now, let me ask this. I understand that. Practically everybody I know is motivated by sticking it to the media, because the media does run the Democrat Party. This makes perfect sense. I’m not criticizing this, don’t misunderstand. The question is — and it’s an open question — I’m not asking it rhetorically — would something like that cause viewers out there to slap their foreheads, “Oh, wow, really? This whole bump stock thing, the Democrats are responsible for it? I should have known. Those people are worthless.” ‘Cause that’s the reaction you want.

You want people to learn the media is lying to them about the NRA. Would that do it? I understand the motivation. Would Trump do it? Look, I have a story in the Stack. I have to tell you something, folks. Now, it’s the Drive-Bys and all that, but let’s see if I can find it here rather than paraphrase it. The story is that many people are worried that Trump might make a deal with Democrats on gun control because he had such a great rollicking time making a deal with ’em on the debt limit.

Here it is. It’s from TheHill.com: “Dems See Trump As Potential Ally On Gun Reform — Democrats fighting for tougher gun laws think they may have an ally in an unlikely place: the Oval Office. President Trump, since launching his campaign in 2015, has aligned himself squarely with the National Rifle Association (NRA) and other pro-gun conservatives who oppose virtually any new restrictions on buying and owning firearms.”

Anyway, “In previous years,” it says here, “Trump had supported reforms aimed at preventing dangerous people from getting their hands on guns — reforms similar to those being pushed by Democrats following the Las Vegas massacre. And on Tuesday, the president left the door open for firearm reforms, saying ‘we will be talking about gun laws as time goes by.'” Don’t want to talk about it now.

And then it says: “Trump’s history has not been overlooked by the Democrats, who are already encouraged by a pair of recent agreements on government spending and immigration — the first finalized, the second tentative — between the president and,” Chuck and Nancy. “Hoping to build on that bipartisan cooperation, a group of almost 100 House Democrats sent a letter to Trump Wednesday urging the president to join their effort to combat the gun-violence plague that was highlighted so tragically Sunday in Las Vegas.”

Because, after all, don’t you know, my friends, the Democrats have been all about bipartisan cooperation with Trump from day one. Ha. So this is a very presumptuous article from the Drive-By left believing that they can possibly trick Trump into joining them. They think they can, because they think they’ve tricked Trump into joining them on a couple of things within the past month.

Now, Steve Bannon said in Trump does a 180 on the NRA and on guns, then it will be over. What he means by that is that would definitely be something that would cause Trump’s supporters to abandon him, or get really mad. I think Bannon’s right about that. Trump has been so appreciative and so loyal to the NRA that I just don’t see it. I think these people are whistling Dixie. Oh, what I great insult to these leftists, whistling Dixie. But they clearly think they got a chance at it. They clearly think they have a way to get Trump to side with them on this issue.

Mr. Snerdley, have I ever told this audience the efforts made — when I was gonna address the NRA in the early nineties, I was set upon by Washington media people and even a member of the Clinton war room that if I went to the NRA — I mean, they were all over me like white on rice for three weeks. That I could change the world, if I would go to the NRA and tell them essentially what the Democrats think of ’em.

I have not told that story? Well, it happened. I was invited to dinner. I had carrots dangled about what doing something like that could mean for my career, meaning with them. These people were all leftists, or all media Democrats. My point in bringing it up is that I have no doubt that they’re working on Trump this way and people within the Trump orb. I have no doubt that they’d be working on Ivanka and Jared, for example. No doubt whatsoever to do just this kind of thing.