Still No Answers About the Las Vegas Shooter’s Motive

RUSH: As always, we start with Las Vegas. Here we are more than three days later, we still have no motive for the Las Vegas shooter, even after talking to his girlfriend, who, by the way, is an Australian citizen, who was apparently married to two Americans at one time and who appears to have used two different Social Security numbers and numerous aliases.

She’s a native. She has Australian citizenship and an Australian passport. But I don’t know what her circumstances are in this country. I don’t know if she has a green card or some special visa to allow her to live in the country all these years. Now we’re being told that Paddock, the shooter, gave her somewhere between a hundred thousand, $126,000 to buy a house in the Philippines.

And we haven’t heard anybody raise the question about the house. Could it be part of Paddock’s escape plan? Did he hope to hide out in the Philippines after doing this? We’re being told that he had an escape plan, which puts the kibosh on the suicide-by-cop theories. We also said that there was a picture of the suite in which he stayed. It looked like there might have been a note. People are thinking it might have been a suicide note. It wasn’t that. 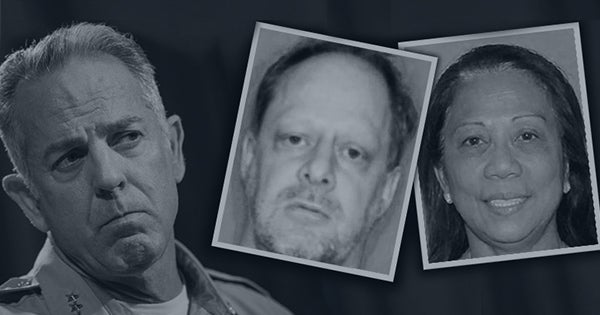 The law enforcement officials in Las Vegas are increasingly saying that he could not have done this alone. That he had to have some help somewhere along the way, which means, if true, that there’s somebody else who knew what was going on. There are now other people who are claiming there was a second shooter. We’re gonna have a grassy knoll aspect of this. Somebody is convinced there had been a second shooter. We also know that the shooter or somebody else tried to blow up the jet fuel tanks across the street at McCarran International Airport.

This guy is supposedly highly educated, a scientist, very knowledgeable, wealthy and all that, but didn’t know you couldn’t blow up jet fuel tanks by firing into them. They are protected. And jet fuel, it’s kerosene. And there are steps that are taken for just this kind of attempt that don’t totally prevent, but they take great steps to make sure that such attempts, firing bullets and so forth into the tanks, would not result in an explosion.

They found a couple holes in the jet fuel tanks and they patched them rather quickly.