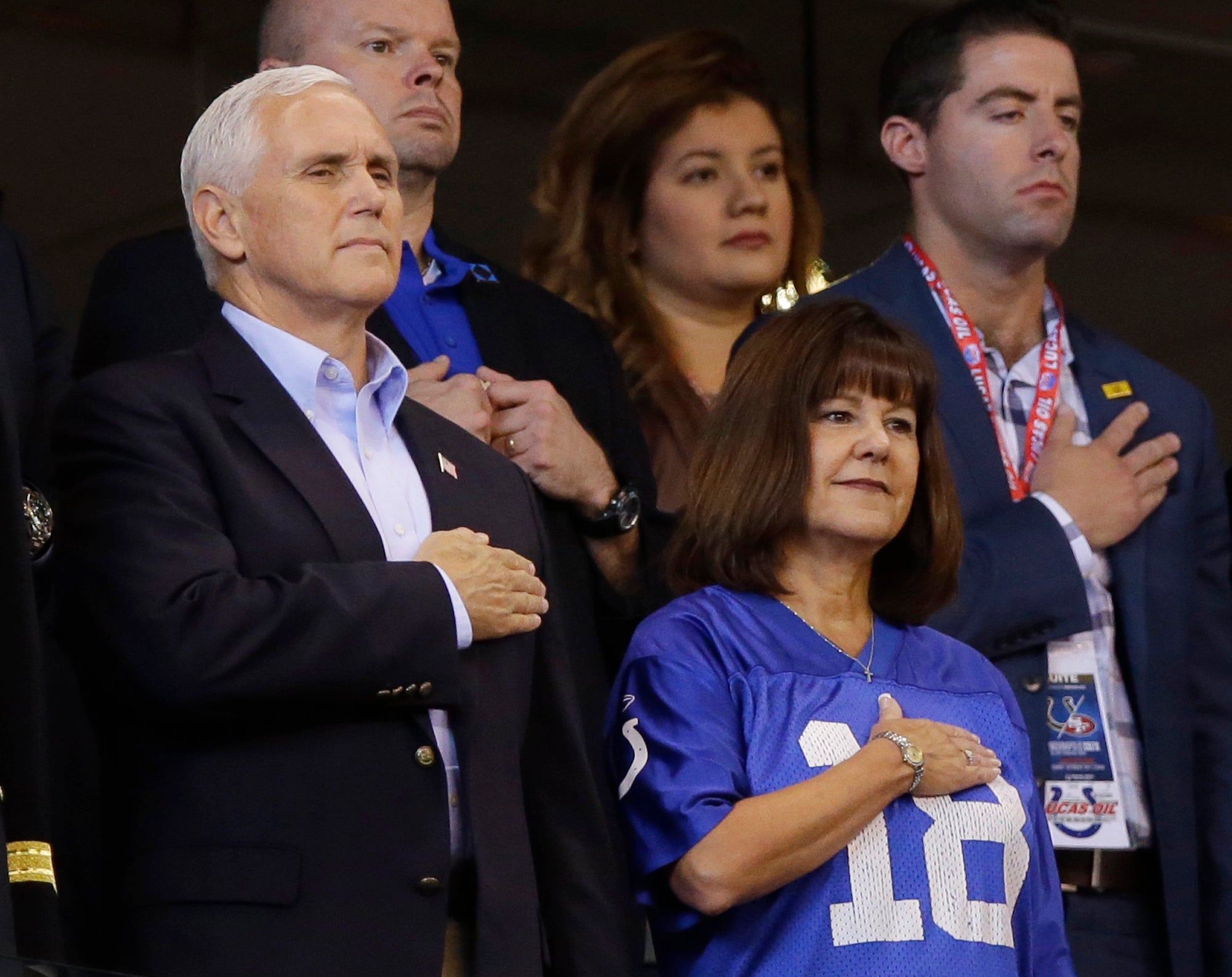 The proof for this is that supposedly the Pence media detail was told not to bother coming into the stadium, stay on the bus, that Pence wasn’t gonna be there very long. It’s not Mike Pence that made this possible. It’s the players for the San Francisco 49ers and if any of the Colts were involved who made this possible. This is what pushing back looks like, folks. This is what refusing to cede the moral high ground to the left looks like. And of course they’re gonna act like stuck pigs. They’re gonna react like they’ve been offended like no one ever has. “How dare you take my PR stunt and convert it into your PR stunt! How dare you!”

They’re coming down on Pence and they’re coming down on Trump. But Pence and Trump are simply being consistent with what they have said from the get-go on all of this. They are not… Pence has children, a son in Iraq. Don’t forget this, either. It was about a year ago Mike Pence and his wife went to a performance of Hamilton on Broadway. You remember this? And during that performance cast members decided to lecture Mike Pence, vice-president-elect, on the importance of protecting “diversity.” Pence just smiled and he was polite and he took it.

He went to enjoy the performance. He wanted to go backstage, congratulate the cast on a job well done, but they mocked him and made fun of him and then lectured him while he is in the audience on the importance of “diversity.” Well, Pence and Trump are not taking it anymore, and this is what it looks like. For decades now, we have become conditioned to just accept any and all anti-American displays. We’re supposed to be tolerant. We’re supposed to sit back when they try to put out of business a bakery or a photography shop that refuses to cater (because of because of religious freedom in the Constitution) a gay wedding.

Those businesses are sought, they are targeted, and they are sued. The people that run them are targeted for being put out of business. We sit around and we just accept it. But we’re not sitting around, and we’re not accepting it anymore. We’re supposed to be tolerant, they tell us. So I give Trump and Pence credit for at least pushing back and trying to deprogram us a little, that we don’t have to take it. And I don’t care if the media gets all upset and exercised, saying the vice president wasted taxpayer money. You want to talk about wasting taxpayer money?

How about silly expenditure of money on a nonexistent fact: Collusion between Trump and Russia to rig the election! Something that did not happen, something for which there is no evidence, and how much money is spent so far and how much of it has been wasted? We never talked about (well, they didn’t; we did) all the money it took to provide vacations and separate airplanes for the Obamas. And Mrs. Obama taking her own plane when she wanted to leave a day early. The Obamas set a record for the amount of taxpayer dollars spent on vacations.

And we were told to just sit there and take it. The president was important! He needed his downtime, recharge the batteries. George W. Bush chopping wood in Texas was never said to need downtime to recharge his batteries. They accused him of not caring about the job, the people of country, and going down to Crawford, Texas, and wasting time ’cause he was too stupid to know what was right and wrong anyway. It wasn’t about wasting money when we had the national debt doubled under seven years, eight years of Barack Obama.

Even though, by the way, I asked a question last week, “Senator Schumer, can you name me a law that would have stopped the shooter in Las Vegas?” And Dianne Feinstein has answered, and she’s admitted there’s not a law. How long is she…? (chuckling) She’s out there saying, “You’re right. You’re right. There isn’t a law we could pass that would have prevented this.” Thank you, Senator Feinstein. These people demanding confiscation of guns require that their security details be armed. They’re different than you. They’re better. They are more important.

They need armed guards. You don’t need your gun. This is one of the reasons, one of many why Trump wins. He wins because he’s transparent, he’s the voice of the people who make the country work, not the voice of the people who claim to do the country’s thinking. And I don’t mean this exclusively with matters of policy. Trump speaks on behalf of people who have been insulted and bullied and deceived. These NFL protests are not about policy. This is a cultural issue. This is about damaging the National Football League.

This is about inflicting as much harm on the NFL as possible, and it is wildly succeeding. Millions of people pledge their allegiance to the Constitution and the flag, which represents that allegiance. That allegiance supersedes allegiance to any NFL team or to any cause. There’s a strong and binding culture that exists among people who don’t live in elitists bubbles. Donald Trump sides with the people because he thinks they’re right. There isn’t any hidden agenda here. There are no double standards. It’s just simply about right and wrong.

It’s the practical exception of patriotism, and it’s being assaulted.

It is being impugned, it is being protested — and it goes against the grain of the thinking of the vast majority of the American people — and finally people are pushing back against this, and the people who are engaged in these protests are acting so righteously offended and indignant that they’re not being listened to, that they’re not being heard, that what they’re asking is not being replied to. Nobody has to listen to you, players. You don’t get that right. Nobody has to agree with you — and, furthermore, you do not get a pass on consequences when you engage your free speech rights or whatever else you think you happen to be doing.

RUSH: Now, we’ll get back to the stuff in Indianapolis, Mike Pence and the supposed PR stunt. But I love it. I’m just telling you, I love it. It’s what push-back looks like. The left isn’t used to this. They’re used to owning what they define as the moral high ground. When they protest, everybody agrees with ’em and you must shut up if you don’t.