RUSH: Have you seen the Obamas’ apology? I have the Obamas’ apology right here in my formerly nicotine-stained fingers. What did I do with it? (shuffling papers) Now I’ve got my Stacks out of order because I didn’t really… Here it is coming up. Right here it is. I’m gonna read it to you. I’m not gonna play the audio of it. I don’t even know there is audio. (pause) Oops! Wrong page. I thought I had it ’cause it looks identical. Here it is. This what the Obamas said. 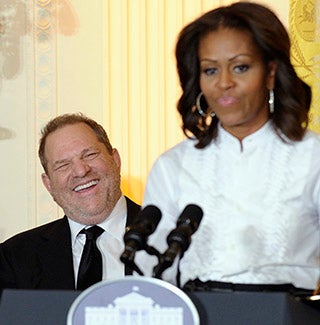 “Michelle and I have been disgusted by the recent reports about Harvey Weinstein.”

Then the next line: “Any man who demeans and degrades women in such fashion needs to be condemned and held accountable regardless of wealth or status.” Any man? Now, we’re talking about the Obamas’ friend and benefactor. There’s no need to make this about “any man.” It’s about a man. It’s about a guy. They can’t specify that they’re upset with Harvey. They’ve gotta include Harvey… Now, they don’t mention Bill Clinton’s name here, obviously. Weinstein has been condemned. Why are they Obamas so late to the party?

If the Obamas want Weinstein held accountable, they should call out by name those who covered up for him, but they won’t do that. If people like Matt Damon and Ben Affleck — and people are wondering, “What’s the big deal with them?” Well, they’re only… We only know who they are because their first movie was Good Will Hunting and it was Weinstein that did that. Weinstein distributed that and made it happen, so they… I mean, everybody who makes it, who has any decency at all, never forgets the people that made it possible.

They undoubtedly have some loyalty to Weinstein. But they’ve been late to the party as well, just as the Obamas are. If Matt Damon and Affleck are proven to have covered up for Weinstein, will the Obamas condemn that? We’ll have to see. The fact is this is more than likely the last tweet on the subject from the Obamas. “We should celebrate the courage of women who come forward to tell these painful stories.” What is this “we”? We do celebrate that courage! You don’t. Hollywood doesn’t.

That’s the whole point here. You didn’t celebrate Bill Clinton’s accusers, and you still haven’t. Name those in Hollywood who’ve spoken out against Harvey Weinstein. Celebrate ’em now. Go ahead and have a party for ’em. I mean, rape and abuse of women is one of the biggest deals in the Democrat Party and the American left. These women for coming forward after all this time ought to be heroines, but they remain nameless.

“And we all need to build a culture — including by empowering our girls and teaching our boys decency and respect — so we can make such behavior less prevalent in the future.” They’re not even committing to wiping it out, just making it “less prevalent.” The point is, Mr. and Mrs. Obama, we have built that culture. It is the distinct, great American cultural that Hollywood mocks and impugns and laughs at, and you join them in that. We have that culture. It’s called the bitter clingers and religion and guns. We have built a culture that empowers our girls and teaches our boys decency and respect.

RUSH: Now, I have another question here. I have a question about this Harvey business. Where are Republicans, Republican leaders making hay out of this? I don’t mean joining in the assassination, character, whatever, of Harvey Weinstein. I don’t mean that. I mean, where is the Republican Party trying to take advantage of this? If this were a Republican to whom this was all happening, all we would be seeing is whatever Democrats think and what this shows us about the Republican Party and conservatism and what a bunch of whatevers they are.

Where is…? The Republicans don’t even play the game. There’s all kinds of points to be made here about phoniness, about hypocrisy, about these people claiming to be the great arbiters of culture and virtue and values. And look at them! Every major Democrat — Barack Obama, Michelle Obama, Bill Clinton, Hillary Clinton — tried to give Harvey Weinstein what he was asking those women for.

The Obamas and the Clintons gave Harvey what he was seeking from those women, because he was dumping money into the Democrat political campaigns and causes and doing everything he could to defeat Republicans. The gooey and the icky, sticky fingers of the Democrat Party are all over this, and it might help if the Republicans pointed it out.