Gigantic See, I Told You So About Liberalism, Abortion, and Hollywood

RUSH: Now, also coming up on the program today, a couple of gigantic See, I Told You So’s about liberalism, abortion, and Hollywood. And I had what I thought was a very clever bit yesterday. Frankly, I expected this to pop up all over the media, and there’s not a blip of it, which means they’re really occupied with other things. In fact, there may be three gigantic See, I Told You So’s today.

I told you, I evolved a theory, and I actually evolved this theory while speaking to you. It hit me while I was in the moment of monologuing, but why all these men in Hollywood claim to be so pro-choice and claim to be so interested in women’s rights, and it’s nothing other than getting laid. And the evidence is abundant now. I have always wondered, how in the world can all of these guys out there be this devoted to pro-choice? It hit me like a ton of bricks a couple of days ago on the program. And it’s been confirmed, by the way, that’s the See, I Told You So, it’s been confirmed. It is now beyond just an educated theory of mine.

RUSH: During the program earlier this week, I forget what day it was, because yesterday felt like Friday to me. So I’ve had two days in a row that feel like Friday, the end of the week. I mean, we have been jam-packed. There hasn’t been a moment to take a breather at any time in the program this week.

And during one of the intense days of the discussion of the Harvey Weinstein affair, something hit me while I was in the middle of a point that I was making. And it’s one of those things I should have put together much sooner, I mean, by years than I did this week.

Essentially, it is that my new belief is that all of these guys in Hollywood — actors, primarily — but producers and other executives whose names are known — well, why limit it? Virtually probably every male with any power at all in Hollywood is very publicly supportive of a woman’s right to choose, abortion, Planned Parenthood, and other feminist issues.

I mean, they’re front and center with it, up front, front and center, they are loud. And they leave no doubt that they are totally pro-feminist, pro-abortion, pro-this. And in the process of explaining all this in context with stuff that happened with Weinstein this week, I remembered something that I read, somebody said to me a long, long time ago. And it was half joking, but it was an expert in Hollywood saying, “You know what Hollywood is, don’t you? It’s all about getting girls.” If you strip Hollywood down to its basic essence, that’s what guys in Hollywood want. It’s the fastest way to get girls known to exist in America. Athletics is another way.

I couple that with my knowledge of men and what they will do. They will bend, they will shape, they will be flexible, they will lie, they will do whatever. If they’ve zeroed in on a woman or a series of women, whatever those women want ’em to be, they’ll be it, or say they are. And I think that’s a large part of the men in that town being such hypocrites. Because they’re all known for being pro-female, pro-women, pro-choice, pro-abortion, pro-feminist. They show up at all of the rallies and all of the marches and all the organizations that feminist groups do. They are massive supporters of Planned Parenthood.

And I began to think that a lot of it is probably just out of convenience. It’s the fastest way, it’s a direct line. It takes away one of the many obstacles that otherwise might be there if they weren’t so adamantly pro-women. And so mentioning the theory resonated with me and I thought, you know, this is really right.

The reason this matters to me, folks — I should specify the realization. I sometimes am very naive. And when people tell me that they are a certain thing, they believe certain things ideologically, I tend to believe them. And then I ask myself, why? It doesn’t make any sense. Why are all these guys so pro-choice, pro-abortion, adamantly so? And it’s much like the question, why is everybody in this town so damned liberal? And, of course, we’ve always concluded it’s the only way they can work. You have to be that if you want to get jobs. Now, that’s undeniable.

And I actually think a lot of the men claiming that they’re pro-feminist and pro-abortion, Planned Parenthood, are just saying it because it gets ’em further down the road they want to go. Well, lo and behold, a story here in the Daily Signal: “Weinstein Scandal Reveals Truth About Hollywood’s Feminism.” Now, I’m not claiming any special brilliance here. You people out there may have figured this out long before I did. It’s been swimming around in my mind in an abstract way for years and years, but something happened this week to make it crystallize.

Here’s the story. “Five years ago at the Democrat National Convention –” the piece is written by Katrina Trinko, by the way. “– I went to a Planned Parenthood rally, where one speaker was TV actress Lisa Edelstein. ‘Do not go to the polls alone,’ she told us. ‘Drag somebody, if she’s a woman especially, because those women are going to vote for Obama — if they know what’s good for them.’

“Edelstein is hardly the only Hollywood figure to make the case that liberal policies are crucial to women’s happiness and welfare. Yet, with the media still reeling from the revelations about powerful Hollywood producer Harvey Weinstein’s behavior toward women, it’s time to examine both the people promoting that worldview — and the worldview itself.” 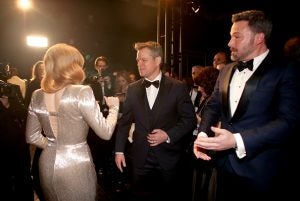 Now, the actress whose boob he tweaked — do you remember this? — that actress is Hilarie Burton, and she used to be, when she was 20 or 21, she hosted Total Request Live on MTV. She now has a role on the ABC prime time series Lethal Weapon. She plays a DEA agent married to Jeffrey Dean Morgan. Anyway, she’s one of the women that came forward this week and acknowledged that it was Affleck who had tweaked her boob live on the air on Total Request Live. And now all these women coming forward are being praised for bravery and so forth.

We had a caller yesterday, “What’s brave about waiting 10 years for the crowd to erupt and then you join them? What’s brave there?” I said, “I get you, but I don’t want to go there.” The point is all these guys are a bunch of lechers. And yet they’re out there saying that they firmly believe in women’s causes and women’s issues and respecting women, promoting women. They’re all over the equal-pay mess. Whatever ideological public issue involving women is in the news, they’re on it, from the pro-feminist side.

And yet who are they really? To one degree or another, Hollywood has a Weinstein problem, and it’s not exclusive to him. And I think there’s probably a lot of under-the-cover fear out there that Weinstein is not going to remain the lone culprit in this very long, that other names are going to be mentioned as other women get brave and come forward. But here’s a pull quote from this story, “Weinstein Scandal Reveals Truth About Hollywood’s Feminism.”

“Joss Whedon, the producer and writer behind TV shows including ‘Buffy the Vampire Slayer’ and ‘Angel’ and writer-director of the blockbuster ‘Avengers’ movies, came under fire from his ex-wife Kai Cole, who penned a damning essay about his affairs during their marriage in The Wrap this August. Cole wrote: Despite understanding, on some level, that what he was doing was wrong, he never conceded the hypocrisy of being out in the world preaching feminist ideals, while at the same time, taking away my right to make choices for my life and my body based on the truth. He deceived me for 15 years, so he could have everything he wanted.”

Bingo. Bingo. That’s my whole point. They lie about being pro-feminist, lie about being pro-female, all to get in bed with these babes, all to marry them, all to party with them, but when they live their real lives, they aren’t the people they claim to be. They’re gigantic hypocrites. And so the pro-women aspect of these Hollywood guys’ lives is a construct designed to facilitate whatever their hedonistic pursuits with women are.

Mark Ruffalo is one of the weakest left-wing lunatics in Hollywood. I mean, whatever the issue is he’s unhinged liberal on it, including anti-Trump hatred. And he fits this theory of mine to a T that much of it is a construct to be praised and adored and respected by Hollywood women. 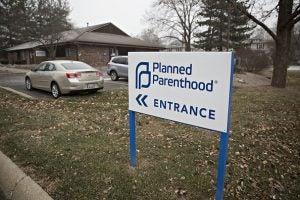 “Weinstein himself pledged $100,000 to Planned Parenthood in May, although the organization says he never delivered on the promise.” But he got a lot of PR out of pledging the money. “And that’s just Planned Parenthood. Hillary Clinton and Barack Obama both racked up considerable celebrity endorsements in their presidential races, compared to virtually none for Donald Trump and Mitt Romney. In a speech at the 2016 Democratic National Convention, actress Lena Dunham stressed how Clinton would help women, saying: ‘Do you want equal pay for equal work? The right to make decisions about your body? Paid family leave?'” Vote Hillary.

The point is, when you hear Hollywood men talking up that stuff, when you hear Hollywood men echoing what these Hollywood women are saying, understand what it is. So if everybody is talking this way, and if everybody is acting this way, why isn’t Hollywood this very happy, utopian place? Because we’re learning that it isn’t. We’re learning that Hollywood, for women, is actually a daily personal risk! I mean, to listen to them talk about the things that are done to them. And it’s all liberal all the time. Where is the utopia?

This is another one of my points. Wherever you find concentrated, undiluted liberalism, you find misery, you find chaos, you find corruption, you find poverty, you find unhappiness, you find anger and resentment. Whenever liberals are the only people that make up a thing — a city, an organization, a club — they are miserable. They are not happy. Somehow the utopia has escaped them. And so that is See, I Told You So number one.