RUSH: I mentioned that Senator McCain was on The View today. When I heard that, I thought, “Have they added to the cast?” And I said, “No, he’s a guest.” And we have a couple of bites here. Before we get to his appearance on The View today, last night C-SPAN3, History TV, Brian Lamb interviewing McCain about the legacy of the Vietnam War, and here is McCain. First of two on this: 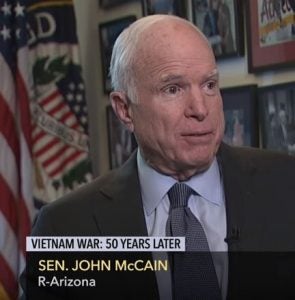 MCCAIN: One aspect of the conflict, by the way, that I will never, ever countenance is that we drafted the lowest income level of America with, and the highest income level found a doctor that would say that they had a bone spur. That is wrong. If we’re gonna ask every American to serve, every American should serve.

RUSH: Now, you know what this is? This is so patently obvious. Who would have been a high-income level person who found a doctor to say he had a bone spur? Why, I think that would be the Trumpster. I think McCain’s going after Trumpster. Have you noticed something here, ladies and gentlemen, that they are trying everything on Trump that failed on Clinton? I mean, there are people who went after Clinton as a draft dodger, as an enemy sympathizer, as making speeches over at Oxford condemning the U.S.

But it’s not just that.

Now, Hillary says, “It’s not relevant anymore. It happened in the past.” So everything they defended Clinton on, everything, they’re now zeroing in trying to get Trump. Let’s do a flashback. July 18th, 2015, Ames, Iowa, Family Leadership Summit. This is Trump during the Q&A. The moderator is Frank Luntz. He said, “Referring to John McCain — a war hero, five-and-a-half years a POW — and you call him a dummy. Is that appropriate to be running for president and talking that way?”

TRUMP: John McCain goes, “Oh, boy. Trump makes my life difficult. He had 15,000 crazies show up.” Crazies. He called them all crazies. I said, they weren’t crazy. They were great Americans. I supported him. He lost. He let us down. But, look, you know, he lost. So I never liked him much after that, ’cause I don’t like losers.

TRUMP: He’s not a war hero.

TRUMP: He’s a war hero ’cause he was captured. I like people that weren’t captured, okay? I hate to tell you.

LUNTZ: Do you agree with that?

TRUMP: He’s a war hero because he was captured, okay? You can have — and I believe, perhaps, he’s a war hero.

RUSH: Okay. That was July 18, 2015. That’s a month after Trump went down the escalators. Well, when Trump said that, do you remember? I mean, that was ending number two. The speech he made after going down the escalator when he described the kind of illegal aliens and immigrants getting into the country from Mexico — the rapists and the purse-snatchers and the muggers and so forth.

Everybody was laughing. “This guy’s not serious. There’s no way,” and then a month later, he says this. (paraphrased) “Yeah, McCain’s a war hero ’cause he got captured. I don’t respect people that get captured.” When he said that, that was the second ending. Trump was not supposed to or going to survive that. But, as we know now, he was elected president. And McCain — look, understandably — is still seething over that.

You know it as well as I do. So now we move forward to this morning on The View on ABC. One of the hostettes is sunny… Is it Hostin or Hostin? I never know how to pronounce it. I think it’s Hostin. Sunny Hostin. She says, “People thought you were talking about Mr. Trump when you talked about draft deferments and stuff because he had a doctor’s note that said he had bone spurs,” and this is what happened after that…

MCCAIN: More than once, yes.

HOSTIN: Do you consider him a draft dodger?

MCCAIN: I don’t consider him so much a draft dodger is as I feel that the system was so wrong that certain Americans could evade their responsibilities to serve the country. He should have either… We finally did, as you know. We went to all volunteer force.

MCCAIN: And that’s fine. If someone wants to serve; they should be able to. And, by the way, that is now down to about one or two percent of the American public.

So those 1% who do, they volunteer, so McCain’s argument, as he admitted, his argument about preferential treatment back in the days of the draft is out the window ’cause now it’s all volunteer. But there’s another side to that too. They volunteer when we are fighting more wars at once than we have in many, many moons. There’s a pretty good bet when they sign up that they know where they’re gonna end up going and what they’re gonna end up doing — and still, they do it. And still the Democrat Party finds ways to impugn them!

“What do you mean by that, Rush?” Very simple. I’ll explain it to you. The Democrats run around saying, “Well, they only join because it’s the only way to get an education in this country ’cause education’s so restricted, “or, “They’re so poor! The only reason they joined is ’cause there’s so poor I cause I graduated only way they can ever earned $18,000 ’cause the American economy is so unfair.” To this day, the Democrat Party will do everything it can to run down people who volunteer. They sign up for it.