Why Did Jeff Sessions Ever Recuse Himself?

RUSH: Jeff Sessions. I’m gonna… I have to do this. I have to steal the thunder. We have a caller waiting. In fact, let me take the call. It is line 2. It’s James in Cleveland. It would be devastating if I mentioned this and this guy has been on hold for an hour and wants to talk about it. So, James in Cleveland, welcome to the program. Great to have you, sir.

RUSH: You bet. What are you gonna say?

CALLER: I think it’s time for Jeff Sessions to recuse his recusal of the Russian investigation. Because of this dossier being opposition research or lies, then there’s no basis for his recusal anymore.

RUSH: You would think. A great point. A point that I was eventually gonna make. I’ve even getting some emails, “Why haven’t you mention Sessions? I can’t believe you let that get…” I can’t do everything in the first hour. No, it is a relevant question to ask. Why did Sessions recuse himself? Do you remember what led to this, folks? Because I do. I remember every damn element of this because I’ve been fuming about it since it began. Jeff Sessions — who, for the life of me, I don’t understand why he didn’t suspect what was gonna happen to him in his confirmation hearings.

Al Franken, a genuine mental midget, went after Sessions on a bunch of bogus hearsay and tried to make something sinister out of Sessions having been at a cocktail party where that fat Russian ambassador was lurking, Sergey Kislyak. This guy was lunching with everybody! He’s the only Russian anybody can find in the Russian collusion scandal, and he’s meeting with everybody. So he and Sessions rubbed shoulders at one of these typical Washington cocktail parties that a think tank throws before one of their scholars presents some presentation that only 10 people in America could possibly understand.

Sessions didn’t remember it, and so Stuart Smalley is zeroing in for the kill. Sessions said, “I — I — I don’t remember, Senator.” It turned out he was there. So because he had rubbed elbows with Sergey Kislyak, he felt it necessary to recuse himself from the Russia investigation because there was also an allegation that as a surrogate — spokesman, supporter of Trump’s on the campaign trail — that somehow him ending up as attorney general and overseeing anything involving the Russians would be illegal. It would have a sense of impropriety.

So Sessions, who is just overflowing with honor and decency, recused himself before talking to Trump about it. Trump was livid. Pfft! I was livid! There was no need for Sessions to recuse himself, and because he did, we now have Mueller. Well, not because he did. I don’t want to lay that off on Attorney General Sessions. But the point is his recusal was totally unnecessary because it was done on the basis of made-up BS. I so want to use the words that “BS” stand for. But I’m not going to because of a sense of honor and propriety here.

But I’m telling you, this is so beyond the pale. So Jeff Sessions has no business being recused. If anything — if anything — President Trump has now more justification than ever for firing Mueller! Mueller was in on this as the previous director of the FBI before Comey! During the Obama administration. In fact, Holman Jenkins of the Wall Street Journal: “The FBI’s Political Meddling — Mueller is the wrong sleuth when his ex-agency is so tangled up with Russia.” Yeah. That’s a good way to put it. Trump isn’t tangled up with Russia; Hillary is!

“Let’s give plausible accounts of the known facts, then explain why demands that Robert Mueller recuse himself from the Russia investigation may not be the fanciful partisan grandstanding you imagine.” Meaning: It wouldn’t be partisan at all to get rid of the guy now. He’s tainted! He’s been investigating no crime — with no limits on money or investigators — on the basis of something that was entirely made up! The Trump dossier. You still cannot turn on cable news and guarantee that you will even see this story.

But when you do, nobody will tell you… You’re not gonna see the dots connected. They’re not gonna go back and show you the video clips of Brennan saying that this formed the basis of his investigation, because in the swamp — halfway even at Fox News — it’s not that big a deal. It’s just typical Washington. It’s just the way it works. Well, I’m not in Washington; I don’t live there and I don’t accept that. That’s not near enough an explanation for me — and not that I’m anybody. Look, in the grand scheme of this, I’m a nobody like we all are.

And they want to tell us Trump’s the guy who’s unfit, and they want to try to tell Trump is uncivil, and Trump doesn’t have the proper decorum, and Trump doesn’t have the decency to serve in this office? Jeff Flake and McCain and all these guys who did nothing but lie in every campaign to their constituents in order to get elected! Wait ’til you hear. I’ve got a list of things Flake voted for. We’re gonna compare those to the way he campaigned, and we’re gonna learn that Jeff Flake leaving the Senate is a net positive.

CALLER: Oh, thank you, Rush. I wanted to know with this unbelievable amount of corruption — the most I think I’ve ever seen since I’ve been following it — do you think we’ve finally reached a threshold where Sessions and Trump and maybe the Republican leadership are actually going to enforce the law? Do a real investigation and actually, you know, maybe indict these people responsible? Fire Mueller, fire Rosenstein, et cetera? 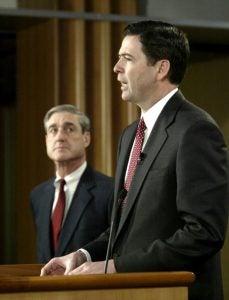 RUSH: Well, here’s the thing. Now, it gets tricky. Do you know, first, that it is not illegal to lie about your political opponent?

RUSH: That’s First Amendment. In politics, you can say whatever you want. It muddies and dirties the process. But therefore to (sigh) indict Hillary and go legal on this may not be the way to go. Now, in terms of firing Mueller and having Sessions walk back his recusal and just warn everybody here that this Russia thing is being dropped, there’s nothing to it, the whole thing’s been made up? How do they want to go about doing that? Let me put it this way.

I’ve had three people now reacting to this saying, “Finally! Finally! We may realize our dream of Hillary Clinton going to jail!” I don’t see that happening. I just don’t. Remember, we’re talking about the Washington establishment. (sigh) I just don’t see her going to jail over any of this. That’s my gut reaction. But it is fascinating… Maybe not fascinating. It is interesting to ask: Why did the Washington Post and TheHill.com drop the dime on this? Now, there are stories on this.

Maggie Haberman, who is a writer for the New York Times, has a short little piece about how livid she is that these sources have been lying to her for a year about this dossier. The impression given is, “You don’t lie to the New York Times! If you do that, we are going to take you out.” But there’s still more to this explanation than just that, because this literally is — just the publishing of these details — throwing the Clintons overboard. And you have to ask: Why? I mean, if you have any curiosity at all.