RUSH: I want to give you a summary of some headlines here. “CNN Reporter Declines to Share Physical Description of Suspect in New York Attack — CNN reporter Shimon Prokupecz told viewers Tuesday he would not share the description of the suspect believed to be responsible for multiple deaths in New York City. … Propkupecz described the scene as the driver striking people from behind and then running into a school bus. ‘Police know who he is,’ Propkupecz said. ‘They have a description of him. I’m not going to share that at the moment.'”

Why not? So here is another CNN reporter not willing to assist law enforcement. Why might that be? This is not hard to guess. The CNN reporter recognized that this guy more than likely is a militant Islamist, and it’s not politically correct to blame them ever. So he in good conscience using every bit of training he’s had and political correctness: I am above this, I’m a reporter, I can’t choose sides, I’m not gonna help the cops. The cops know.

Bernard Shaw refused. (paraphrased) “As a journalist, the sacred principles of journalism that I live by prevent me from taking sides,” said Bernard Shaw. “I refuse to be debriefed by U.S. military.” Really? Those are my naive days. Those are back in the days when I thought we were all in this together whatever our domestic differences were. When Americans were at war, I actually thought we were all Americans. So I was shocked, I was stunned, I was mad — everything you could possibly be — at Bernard Shaw. 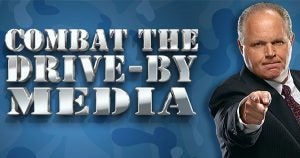 “As a journalist, I can’t choose sides.”

I kept saying, “Where do you think your freedom comes from, Buddy? Where do you think your First Amendment rights as a journalist come from? Did Saddam Hussein write those rights for you? Are they enshrined in the Iraqi constitution? Where do you get them? What gives you the freedom to do what you do?” In other words, the library of his freedom is the United States of America. Bernard Shaw saw no reason to choose sides, and now this CNN reporter declined to share a physical description of the suspect. “Media Outlets…”

This is The Daily Caller. “Media Outlets Bury ‘Allahu Akbar’ in Reports of New York City Terror Attack — The New York Times and other media outlets buried the phrase ‘Allahu akbar’ in reports on the man who carried out what authorities are treating as a deadly terror attack in New York City on Tuesday. A breaking banner on TheNYT website said the man ‘yelled “God is great” in Arabic,'” it’s what they wrote, “and the same indirect reporting remained in a blurb on the homepage.

“‘The police said the driver shouted ‘God is great’ in Arabic and was shot and taken to a hospital,’ the paper stated. Ditto the Washington Post. “CNN also chose not to mention the Islamic phrase on its homepage” used by the driver. “Allahu Akbar” was not used. Over on CNN, Jake Tapper said, “You know, Allahu Akbar is sometimes said under the most beautiful of circumstances, and too often we hear it being said in moments like this.” Well, that reminds me of Obama. “One of the most beautiful sounds ever is the call to morning prayer in Islam.”

So here’s Jake Tapper: “You know, Allahu Akbar, we too often hear if said during terrorist attacks, but sometimes it’s said under the most beautiful of circumstance.” What is this? What can possibly explain the left’s sympathetic alliance with a terrorist? What can explain this, folks? What can explain a CNN reporter choosing not to help police apprehend the perp? What can explain an unwillingness of the media to correctly and properly identify what the perp actually said at the moment of attack? Why are so many on the left, and particularly in the United States Drive-By Media, so sympathetic to people who commit these terror attacks? Well, there’s an answer, of course. I asked the question somewhat rhetorically.

CUOMO: The best evidence we had is that he was, quote, unquote, “a lone wolf,” uhhh, model.

CUOMO: There’s no evidence now that it was part of a larger conspiracy, larger plot. A depraved coward, in my opinion, rented a truck, and, uh, we lost eight people.

RUSH: Is that what…? Governor, is that really what you want to go with, “a depraved coward,” in your opinion, “rented a truck and we lost eight people”? The whole point is, this guy has backup. He’s got an entire community or neighborhood that gives him moral support, that buttresses him! He’s not a lone wolf and a coward. That’s the whole point of the Diversity Visa Program. It’s the whole point of the necessity being to vet for Sharia supremacists and prevent them from getting in.

He’s got a network of people who think exactly like he does, who inspire him, motivate him, encourage him. He’s exactly not a lone wolf! That’s the whole point. He may have been the only guy in the commission of this crime, but he’s not alone, and he’s not rogue. That’s what they want you to believe so that you don’t think you’re in danger. “It’s a one off. These things happen!” By the way, have you heard a variation of, “Hey, this is what living in a free society is today. This is one of the sacrifices we must make.” Have you heard that going around?

I have. It’s exactly how the leftists deal with this. “Well, you want freedom? You don’t want us running everything about your life? This is what you’re gonna have to pay for! This is how you pay for a guy like Trump. This is how you pay for freedom. You’re gonna have to sacrifice now and then. There’s gonna be randomly eight people dead now and then. Nothing we can do about it. Cowards can rent trucks.” Nicholas Kristof of the New York Times last night with Don Lemon — who did not cry in this particular bite — had this little chitchat here about the event.

KRISTOF: The New York City Police Department has an outstanding counterterrorism operation. And indeed, they’ve tried very hard to prevent truck-rental organizations from renting to people who might blow things up. But you can’t get perfect compliance.

LEMON: Uh, because w-when you… Um… When you think about Oklahoma City, right, that was a Ryder truck, correct?

RUSH: Are you kidding? These guys are talking about the truck now! This truck was a Home Depot truck. So why don’t you go get Arthur Blank and put him in jail? He owns the Falcons and started Home Depot, along with Ken Langone, another rich Republican. Go after those two guys for starting Home Depot. Can you believe this? This is Nicholas Kristof. “We have to limit the access people have to weapons, including trucks.” Truck control! Unbelievable. Nowhere near even identifying much less getting to the root of the problem.

RUSH: Are you serious? We want to now profile Muslims who rent trucks? We’ll have a seven-day waiting period? Do you realize that would be more controversial than refusing to bake a cake for a gay wedding? Somebody actually came up with that idea? Even though the media is proposing it here?

RUSH: We have here a montage. Every time this happens we go through a charade. The charade is that the Drive-By Media will do anything other than identify or admit that the terrorist is a Muslim. Listen to our montage.

FRANK FIGLIUZZI: I’m going to go out on a limb here and say there’s going to be a mix of mental health issues, and maybe some perceived motivation.

MALCOLM NANCE: It could have been an American who was formerly Catholic two weeks ago just as easily as it was a person from south Asia.

ART RODERICK: Was it because today’s Halloween? Suicide by cop.

JULIETTE KAYYEM: This was a man who, you know, suicide by cop.

MICHAEL HAYDEN: We may find that this is just an isolated young man, saddened.

BOB BAER: It’s impossible to get into the mind of these people.

CHRIS MATTHEWS: As an Uzbeki, why would he have an animus toward the United States?

RUSH: Why would he have an animus toward the United States? It’s not that he’s Uzbeki, Chris. It’s that he is a Muslim Islamist supremacist, a Sharia supremacist. Bob Baer: “It’s impossible to get into the mind of these people.” These are the same people that want to go out and authorize psychologists that have never treated Trump to tell us what makes Trump tick. “Well, it’s impossible to get in the mind of these people.” Really? Why, you’re inside Donald Trump’s head every day. In fact, I think it’s Trump living rent free in all these people’s brains, but just my take.

But you notice, “Oh, could be just a rogue, you know, Halloween party, suicide by cop. It could have been an American who was formally Catholic two weeks ago and just got disgruntled with the pope.” Really? You see the lengths to which these people will stretch themselves. Why?

Why are members of the American media and the Democrat Party sympathetic to individuals who kill Americans in cold blood for the purposes of overthrowing American civilization? Why are the Democrats and the media sympathetic to these people? Here’s Jake Tapper. I read his quote earlier, but here he is last night on his show on CNN, The Lead with Jake Tapper.

SHIMON PROKUPECZ: They heard the driver saying, yelling, “Allahu Akbar, Allahu Akbar,” during this incident, which is now leading authorities to believe that this is, as a result, that this is now a terrorism case.

TAPPER: The Arabic chant Allahu Akbar, God is great, um, sometimes said under the most beautiful of circumstances and too often we hear of it being said in moments like this.

CALLER: I want to send out my adulations for your modulations to the EIB nation, sir.

RUSH: We have to take a Social Security card here in Florida.

CALLER: Well, terrorists and criminals, it’s just like the gun laws. They’re not following the laws. So the people that are abiding by the laws are the ones that have to jump through all these hoops.

RUSH: Right. This guy just went out and rented a truck from Arthur Blank and Ken Langone. It’s Home Depot. I’m just invoking their names ’cause I’m getting giddy here. But this is a good, good point.

RUSH: Anderson Cooper was out there and he was speaking with investigative reporter Michael Weiss about the terror attack in Manhattan, and they were interrupted by a heckler.

COOPER: How likely is that there could be a video, kind of a martyrdom video, which is what we saw in the Charles Hebdo attacks?

COOPER: I mean some of the attacks in Europe that we’ve seen —

COOPER: — there — there have been that.

WEISS: I was just gonna say that.

WEISS: If he did make contact with ISIS, they will have instructed him not to just leave a note.

RUSH: “CNN is fake news! CNN is fake news!” It unnerves them. It unsettles them. Believe it or not, you would think that they would let criticism like this roll off their backs, think they don’t care about it. It bugs them. You know why it bugs them? Because Trump started it. They hate “fake news.” They hate being labeled or accused of it. But they are. See, that’s the thing. It hurts because it is.