RUSH: Try this headline: “Papa John’s Blames the NFL for Hurting Pizza Sales.” It’s a Bloomberg story. “Papa John’s International Inc. founder John Schnatter is going after NFL Commissioner Roger Goodell, saying weak handling of the league’s national-anthem controversy has hammered sales of his pizza. ‘The NFL has hurt us by not resolving the current debacle to the players’ and owners’ satisfaction,’ Schnatter, who serves as the pizza chain’s chairman and chief executive officer, said on a conference call. ‘NFL leadership has hurt Papa John’s shareholders.'”

Papa John’s shares fell the most in eight months on Wednesday after third quarter same-store sales missed analysts’ estimates. Papa John’s is headquartered in Louisville, by the way. And Bloomberg points out that Schnatter is a Trump donor. “Papa John’s has been the NFL’s official pizza sponsor since 2010. Schnatter, who founded the company in 1984, donated to Trump’s campaign and has railed against government regulations.”

Schnatter said — this is on the earnings call, by the way, where he made these statements — “This should have been nipped in the bud a year and a half ago,” when Kaepernick first stood up, or sat down, as it were. “Like many sponsors,” Papa John’s said, “we’re in touch with the NFL. Once the issue is resolved, we’re optimistic the NFL’s best years are ahead.”

Now, that was from Bloomberg. Let me look at the time on this. 12 a.m. Same day, different story. Bleacher Report. Headline: “Papa John’s Pulls NFL-Associated Ads Citing ‘Negative Consumer Sentiment‘ — Pizza chain Papa John’s announced Wednesday that it is pulling its advertising associated with the NFL, according to ESPN’s Darren Rovell. Per Jonathan Maze of Nation’s Restaurant News –” it’s a trade publication “– Papa John’s founder John Schnatter said sales are down due to ‘negative consumer sentiment’ regarding the company’s relationship with the NFL. Schnatter also called the NFL ‘an example of poor leadership,’ according to Maze. 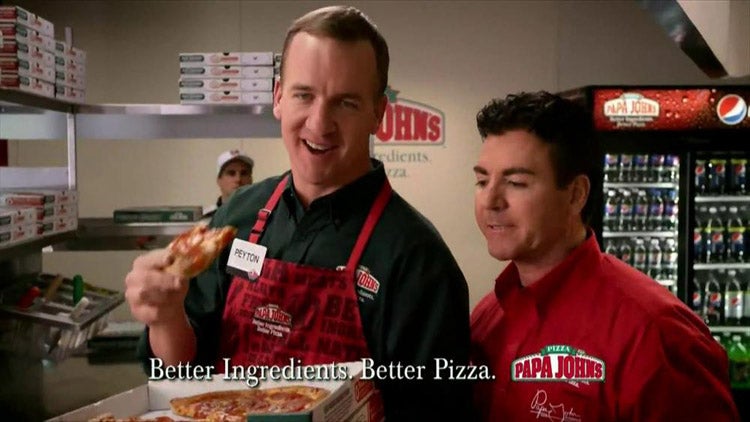 “Papa John’s is deeply rooted in the NFL since it has a deal with the league and 23 of its individual teams, according to Rovell. Former Indianapolis Colts and Denver Broncos quarterback Peyton Manning is a Papa John’s franchisee who also appears in commercials for the company. In exchange for pulling current ads, Schnatter said the NFL has given Papa John’s additional future spots moving forward.”

Papa John himself is in the commercials. He loves it! He loves associating with the NFL. He’s in the commercials with Peyton Manning. I mean, he is Papa John and he’s personalized the advertising campaign with the NFL, and for him to be saying these kind of things and pull out of it? This is obviously his major advertisement investment, and it obviously is in deep, deep doo-doo. To go public criticizing NFL officials, the commissioner by name? This does not bode well for a healthy future relationship.