There’s Nothing to Fear About Apple Face ID

RUSH: Now, bear with me. I brought this up and it reminded me that there’s so much fear and lying about technology out there today. I’m going to explain this, not to defend Apple, although it may sound that way. I’m just interested in the truth. And I despise… I despise lying, biased — knowingly lying, biased — media. Now, we’ve heard about Harvey Weinstein buying journalists and hiring ex-Mossad agents to dig up dirt on the women that Weinstein has attacked to find a way of keeping them quiet or to find out how and if or when they’re gonna go public or what have you. 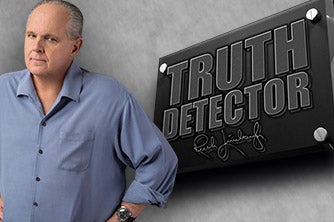 The same thing happens in tech media. It’s very competitive out there, and there are… I’m not gonna name any companies. But there are tech companies that actually pay journalists to promote them and rip competitors, and it happens with Apple and their competitors, and Apple is always way ahead of the game on tech. It’s not that they’re way ahead. It’s that they don’t release it until it actually works. And, when that happens, that’s when they’re way ahead. They make sure that whenever they enter a market, they’ve got the best version of whatever it is they’re offering — and Face ID, they’re two years ahead of competition on this.

So what’s being reported — and I mention this ’cause a lot of people are gonna be afraid to buy this phone, and there’s nothing to fear here. There’s literally nothing to fear about Face ID. In fact, yesterday, to show you how widespread this is, somebody that I was explaining the phone to said, “Does that mean that every time I take a picture…? Is the FBI gonna have my picture?” No! Your picture is not even stored on the phone except the ones you take! If you have an iPhone now that has touch ID fingerprint, would you be surprised to learn that that fingerprint of yours is not kept on your phone? Do you use Apple Pay off of your fingerprint?

Do you know that your credit card number is never once transferred to a merchant in an Apple Pay? Using Apple Pay is more secure than giving somebody your card. The merchant, nobody ever sees your card number or details. When you scan and get a fingerprint on your phone right now, the fingerprint is not detailed. There’s what they call a secure enclave, a part of the processor that’s off-limits to everything except the phone. Nobody from outside can get into it, it’s all kinds of encrypted protected, but it’s not your fingerprint that’s on there.

A massively complicated and long digital key is created by the system when your fingerprint is scanned. And every time you use that fingerprint, the fingerprint is measured against what’s on file. And, if the long, complicated password key matches, then your phone unlocks. It’s the same thing with Face ID. You aim the phone at your face. You go through two different setup things here that take 30 seconds total. There’s not a single picture of your face taken. Your face is mapped by a 3D mapping camera that is so state-of-the-art that nobody is even close to making one.

There are three different aspects that go into creating this map of your face. And, like the touch ID, that map is converted into a massively complicated digital… For lack of a better word I’m gonna just call it a key or a password. And every time your phone looks at you or every time you look at it after you’ve got your face identified, the mapping of your face (the original mapping) is compared, and, if that map equals what they assign the digital key that they assign, then the phone unlocks. This happens in split, minuscule…

I mean, the time it takes is incalculably small.

Now, where the problem comes in is that some media people have reported that software developers have been granted access to the Face ID and can use your Face ID in their apps. That is patently not true. All that’s happens is that developers have been granted access to the front camera, the selfie camera — which, of course, they would need if they’re Snapchat or Instagram or anything else. But nothing, nothing about anything that identifies you is ever offered to anybody. It’s never made available, and it’s never accessible by anybody but you.

And there’s all kinds of safeguards with Face ID. Unlike fingerprint ID, you can only put one face in: Yours. Nobody else can unlock your phone unless they know the digital password you also have to create. But I just wanted to straighten this out, because there’s so much lying and there’s so much disinformation out there that’s designed to scare people out of trusting some of this new tech, and the lying is so over the top. I mean, stop and think about it. How many pictures of yourself do you have on your phone?

Probably as many pictures as there are on the phone! Yet people are worried about Face ID somehow being gotten hold of about the FBI? For what? They can already get your picture any time they want. You probably send it to half the country every time you take one. Bottom line, there’s nothing to fear from it. It’s marvelous technology. And wait ’til you see it in action operating the phone. It’s like there is no unlocking the phone. You just look at it and the phone unlocks. Just look at it and it unlocks.

It’s that fast and it’s that simple. It will blow your mind. You’ll love it. You’ll love playing with it. But don’t buy into this fear that the FBI or James Comey or the NSA is gonna have your fingerprint ID, your Face ID or any of that, because they can’t. They can’t get it, by the way, and they’re very frustrated they can’t get it. But , even if they got it, they’re not gonna get your fingerprint and they’re not gonna get the map of your face. That’s not what’s stored on the device.

RUSH: So, I just got a note. “You know, Rush, I believe everything you say. I mean, I trust what you say. But I do not trust you on this computer security stuff. I just refuse to believe the FBI doesn’t have my fingerprint if I use it on my phone. I know they do!” Do you realize this Looney Toon shooter, his phone is locked and law enforcement can’t get into it? That has surfaced as a…

It’s a big talking point because the pressure is gonna be brought to bear on whoever manufactured this guy’s phone to help the FBI unlock it because they can’t. Folks, you gotta understand something here about computers. Let’s talk phone security here. Computers are digital. Everything is mathematics. There’s a reason that binary code is called “binary.” It’s ones and zeros. It’s digits. There’s no picture of your fingerprint, no picture of your face in this stuff.