Dumping Franken and the Clintons Is Democrats’ Best Option

RUSH: Leeann Tweeden, who is the woman that has gone public with the sexual harassment and abuse visited upon her by Al Franken in 2006 on a USO tour has spoken up more, and CNN has been forced to carry this. This was actually I think around 1:30 this afternoon, half hour ago. She’s a radio/TV host in LA and a model. She’s a sportscaster, and she’s done a bunch of USO tours in which Franken was the headliner, which is where the sexual abuse that’s been reported today happened. We have a couple more sound bites of her describing this.

TWEEDEN: He had his little props for the rest of his little skits by himself. And he’s like, “Well, we need to practice the kissing scene.” I’m like, “Yeah, okay, whatever,” and I just sort of blew him off because I didn’t — like we don’t need to practice the kissing scene, it’s just a quick little thing, you know. And then he persisted, and he’s like, “No, we really need to practice the kissing scene.” And, “Okay, Al, you just turn your head right, I’ll turn my head right, we got this,” you know, whatever. And he kept persisting. I’m like, “Al, this isn’t SNL. We’re not really gonna kiss so we don’t really have to practice.” And he just kept persisting and it just reminded me of like the Harvey Weinstein tape that you heard the girl when she was wired up for the NYPD and he’s just persistent and badgering and just relentless, you know. And so I was just like, “Okay, fine,” just so he would shut up.

RUSH: Now, if you’re the Democrats and their willing accomplices in the Drive-By Media and you’re airing this and you’re hearing this, what must you be thinking? I mean, up until this morning when this broke, you were on the verge of taking out Roy Moore and winning the seat in Alabama, and now this has happened. And now what do you do if you are the media and the Democrat Party? They’re coequal players of this. Don’t think the media is following this. The media is leading this, as they do everything today when it comes to progressive or liberal politics. And this is a giant, giant dilemma for them.

We can reschedule that election down there. The governor can do what he wants. Of course that’ll never happen, but I’m just trying to point out the hypocrisies here. I know they don’t stick to Democrats. They get away with their hypocrisies. But there’s only two ways they can go here. The smart way would be to realize that their objective is to get Donald Trump. You and I know that’s what they want to do. That’s their whole purpose. And they’ve gone from collusion with Russia, to Fusion GPS, to Trump dossier, now to Roy Moore. And after they get rid of Moore, then they turn their sights on Trump. Okay?

If they don’t get rid of Franken, how in the world do they go after Moore and Trump with total credibility? If they in any way try to defend Franken and engineer it so that what he did is not nearly as bad as Moore, and he hasn’t done it in a long, long, long, long time, but whatever. If they try to rationalize it in any way, they’ve got to know they’ve got a problem.

Getting rid of Franken is the simplest, easiest thing to do. They won’t lose the Senate seat. They will gain credibility. It will open the doors for further direct action against Roy Moore ’cause they’ll be able to say, “Look, when it came up and when it happened and we found out about it, we got rid of the case immediately. We got rid of our bad actor inside of three days. And look what the Republicans are doing. The Republicans are trying to hang on and protect this guy.” That would be the smart play for them.

But they also have another instinct, and that is they do not give up their people like we do. The Republicans were first to the cameras and microphones to get rid of Roy Moore. The Democrats do not do that. It’s a last hope. It’s the very last option where they actually throw their own people under the bus. But they may be forced into doing this as more and more stories about Franken surface. Here’s more from Leeann Tweeden as she continues to describe what happened. 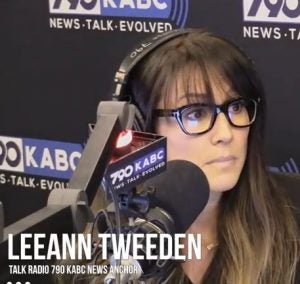 TWEEDEN: We did the line and he came at me, and before you even know it, I mean, you kind of get close, and he just put his hand on the back of my head, and he mashed his face against — I mean, it happened so fast. And he just mashed his lips against my face, and he stuck his tongue in my mouth so fast. And all I can remember is that his lips were really wet, you know, slimy — in my mind I called him fish lips the rest of the trip because that’s just what it reminded me of. I don’t know why. And he stuck his tongue down my mouth.

And I remember I pushed him off with my hands, and I just remember I almost punched him, so — ’cause every time I see him now, like, my hands clench into fists, and I’m sure that’s probably why. And I said, “If you ever do that to me again, I’m not gonna be so nice about it the second time.” And I just walked out away from him, and I walked out. And I just wanted to find a bathroom, and I just wanted to rinse my mouth out. Because I was just disgusted, you know. It was just one of those — I don’t know. I was violated. I just felt like, you know, he betrayed my trust.

RUSH: And then on the flight home she had fallen asleep while sitting. And she is in military gear, wearing a helmet, what looks like a camo vest, and there’s Franken feeling her boobs while a photo of it is taken with a leering, sneering smile like a sixth grader getting away with something. And it’s just photographic evidence, evidence they don’t have, by the way, in the Roy Moore case. They’ve got actual photographic evidence here on Franken.

So that’s the status. Franken’s now joining the call for himself to be investigated saying that women need to be believed. He doesn’t remember the rehearsal the way she does, but he’s certain she’s convinced it happened that way, but he doesn’t treat women this way, and he doesn’t respect men who do, which is an absolute crock because he respected and traveled with Bill Clinton any time, anyplace that he could! He was part of that crowd. “I don’t respect men who do,” which is an absolute lie. These guys are thick as thieves.

And one of the frustrating things is they’ve gotten away presenting themselves as the definition of morality when it comes to women. They are the ones that know how to treat women. They’re the ones that are pro-choice, they understand women’s issues, they understand this. And they have no more respect for women than they’ve got for their ordinary, everyday fan. And it’s another instance of massive hypocrisy, and it’s all frustrating because the hypocrisies very seldom sticks to the Democrats on this.

Now, we got a whole Stack of Bill Clinton stuff. In the midst of all this happening, don’t forget we’ve got the Drive-By Media continuing to write their mea culpas on how they were really wrong in giving Bill Clinton a pass back in 1997 and 1998, 1999. That they should have realized, they should have condemned what Clinton was doing but they just were so young and they weren’t old enough to know how bad it really was, that’s what some of the reporters today are saying.

Daily Caller with the story. “The New York Times couldn’t find any Democrats to defend former President Bill Clinton in an article revisiting the sexual harassment and rape claims against him. The flood of sexual harassment accusations against prominent figures like Hollywood mogul Harvey Weinstein and Alabama GOP Senate candidate Roy Moore has forced many members of the establishment media to revisit the litany of accusations against the former president. In an article published Wednesday evening, the NYT’s Peter Baker noted that he couldn’t find anyone, including Bill Clinton, to speak on the record in defense of Bill Clinton.”

Imagine that. What has happened to the Democrat Party when not a single Democrat can be found today to defend Bill Clinton? That means they want the Clintons gone and they want Hillary gone, but the problem with that is that Hillary isn’t gonna go anywhere willingly. They’re gonna have to drag her off the stage. She is not going to willingly go.

RUSH: And, by the way, MSNBC, I kid you not — we have a ban on what goes on there, so I’m not gonna play it. Just don’t doubt me. MSNBC actually had an infobabe reporting on the Franken grope of Leeann Tweeden and the photo on the C-17, they parsed the grope, and they at MSNBC concluded that it wasn’t a real grope, that he never really touched her, it was an act, it was not a real grope.

They’re parsing the grope over there. Big, big, big mistake, you people. Big mistake. But at Slate.com, “Al Franken Should Resign Immediately.” That is the headline at Slate. Oh, by the way, Claire McCaskill is now making a big show of returning 30 grand that she got from Franken’s PAC. You know, they donate to each other’s PACs there in the Senate, and Franken’s campaign had sent her PAC 30 grand. She’s now giving it back or redirecting it somewhere.

But Slate.com: “Al Franken should resign immediately.” The subheadline is: “Democrats’ credibility on sexual harassment is at stake.” Bingo. Their credibility, I mean, look at people they’ve destroyed or tried to. Clarence Thomas, Roy Moore, I mean, you name it, the list is endless, yet who are the real harassers? And at least this guy Mark Joseph Stern at Slate knows the drill. If you’re gonna give Franken a pass, we can’t go after Roy Moore or anybody else, even Trump. So that’s just the first. We’ll see what happens with this as it continues to unfold here.

RUSH: Here’s Bill in Lynchburg, Virginia, with an interesting question. How you doing, Bill?

CALLER: Doing great, Rush. It’s a pleasure to talk to you. I’ve been a listener since 1988, and I’m gonna get right to it but I wanted to let you know that I’m knocking one thing off my bucket list. But my question is, who took this picture of Al Franken and Leeann Tweeden?

And clearly that person had to be in position and knew full well what was happening. What we don’t know is whether Franken summoned the photographer over or whether it was like the old boys club, “Hey, hey,” Al summons, “get a picture of this. Look what I’m getting away with here. Look what I’m doing,” and grab a picture of it. But that person would know, should there ever be an ethics inquiry. Bill, thank you very much and I appreciate being on your bucket list. I’m flattered to no end.

RUSH: We could take bets, will Franken resign first and spend time with family or resign to go to sex rehab, or will he not resign? Make your bets and we’ll be back tomorrow.