Will the Ladies Who Made Fools of Themselves with Pink Hats over Fear of Trump’s Words Call Out Leftist Reprobates?

RUSH: Here’s the thing. Let’s review. After the election, what happened? I mean, immediately after the election, I mean, the next day, what do you remember? Exactly right. The streets of New York, the streets of Philadelphia, the streets of cities in California were flooded with women wearing hats on their heads that looked like vaginas. They had a name, these hats. These women, they knitted, they marched, they screamed. 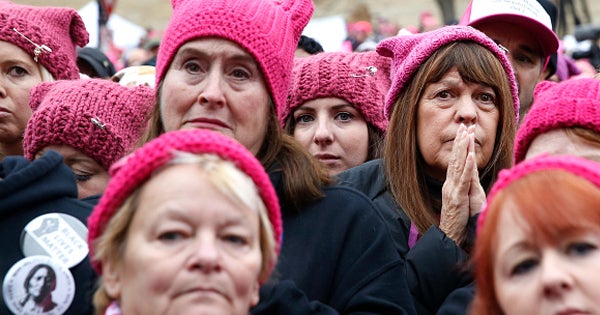 They were crying. They were making fools of themselves in protest of Trump and in fear that Trump would take away their rights. Donald Trump somehow was gonna come along and take away everything about their femininity or their masculinity, depending on how they viewed themselves. Whatever it was, Trump was going to take it away from them. They were scared, they said.

I think the whole thing was bogus. I think it was a George Soros bought and paid for operation. But I don’t doubt that some of the women in these protests were genuinely scared to death. That’s what liberalism does to people. It scares them. If people have bought it, if they’ve absorbed it, if they’ve been exposed to it for decades, since childhood, they were scared to death by something other than another liberal being in power.

His election was an affront to their delicate, snowflake sensibilities. In the meantime, the real people who were and had been limiting and taking away women’s rights were not Donald Trump. They were leftist men. Leftist men in power in leftist businesses were grabbing, were threatening, were harassing, were bullying, were stroking, were tricking, threatening, harassing, firing, limiting job advancement, limiting money to women of all ages!

What I want to know is this. Will the women who made fools of themselves wearing vagina hats in masses, in droves after the election, now organize and rise up again to protest the real threats to you and your rights and your careers and your jobs? The creeps in Hollywood, the creeps and the perverts in media and in government, for doing much more than just talking about grabbing some? You might think Trump did all this, but all you’ve got is Trump talking about it and bragging about it to another guy. That’s it.

But in the meantime, the guys you claim to respect and love and adore, the real men of the left, in real leftist businesses, were the ones grabbing, not talking, threatening, not talking, harassing, not talking, bullying, tricking, exposing themselves, firing you and limiting your advancement in jobs and money. 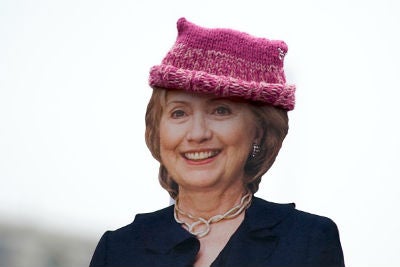 Are you gonna stand up and protest the real threats, ladies, you leftist babes? If a guy just talking about the female anatomy can get you so hysterical, what must all these new revelations do to leftist women? I’m serious. These leftist women who were living in literal quaking fear over Donald Trump, what must they be thinking now, with Weinstein, with Franken, with Charlie Rose. These are heroes, don’t forget.

The list goes on. Mark Halperin, Glenn Thrush. The list has 23, 25 of ’em now. With Weinstein, the number is fast approaching 100. And you ladies realize that Judge Moore is not even in the same league. Judge Moore’s riding the pine in the minor leagues compared to your guys. I’m serious. What are these leftist women thinking? And you know what I’ll bet? I’ll bet they’re not threatened at all. You think they are?

But I’ll never forget the hysteria.