Why Donald Trump Survives and Thrives

The abject double standards and unfairness. The total mistreatment of a harmless individual, Melania Trump, who hasn’t done anything to anyone. They mock, they laugh at, they make fun of, they try to hurt and harm. While on the other end of the scale they lift up and praise Hillary Clinton, Michelle Obama, Elizabeth Warren, and any other hypocrite leftist female. There is never any introspection. There is never any investigation. There is never even a negative word or suspicion about people on the left who a majority of Americans view as incurring great damage and harm on this country.

The people inside Washington of both parties, of all media, Never Trumpers, half-baked Trumpers, Trump supporters, if you’re in Washington, even though you might think you know, I don’t think people there understand how long this anger has raged. And it’s real. They don’t understand the deputy of the perception of the rigged game that the media and the Democrat Party are running. They don’t get how angry these people are at members of their own party who don’t stand up to it, who cower at the first sign of obstruction or objection from the media. It’s a combination of frustration and anger and rage that is all completely legitimate.

And Donald Trump stands up to it and swats it all away like they’re a bunch of insects and flies, enjoys it and smiles is not affected, is not taken off his game, is not misdirected by any of the usual things the media and the Democrats do to take out Republicans, to destroy them. Trump welcomes the assaults and he promotes them and he tweaks them and he encourages them.

The Senate meets with Trump. Reports after the meeting were glowing. You probably don’t know this. Trump met with the Senate yesterday. What you probably know is that Chuck and Nancy were outraged and didn’t show up to a meeting with Trump. What you also don’t know is that Trump wins in that scenario. Trump caused that scenario. A simple tweet from Trump.

Oh, and that’s why they really hate him, by the way. They hate that he tweets and they hate that his tweets are effective. And they’re doing everything they can to try to make those tweets ineffective, and they can’t. They don’t have anybody on their side that can use Twitter anywhere nearly as effectively as Trump does. And they think they have all the entertainment stars and all the experts and the paid professional media consultants, and they can’t come up with anybody who can even compete with Trump on Twitter.

So the Senate meets with Trump. Reports after the meeting were glowing, glowing about Trump, what a great meeting it was, how much progress, so much so that the Senate passed the tax reform bill out of committee. People paying attention to the news believe that the tax bill is dead in the Senate because the Senate hates Trump. The stock market hit a new high.

The Congressional Black Caucasians are getting frustrated with the Democrat Party generally for not doing anything about John Conyers. The Democrat Party’s trying to circle the wagons around Conyers. Congressional Black Caucasians got together to try to come up with a way to get rid of him because they understand that as long as Conyers and Franken are given a pass and are allowed to stay in office, that they are hamstrung in going after Trump, which they so desperately want to do.

More elected Democrats are outed for bad behavior. Another Democrat retired. That would be Luis Gutierrez. After Chuck and Nancy bail on the meeting with Trump over the government shutdown and the budget, Trump goes ahead and has the meeting. There’s a photo-op. There are two empty chairs, one to each side of Trump. Trump is sitting there in the meeting in the Cabinet Room, he’s smiling, everybody’s having a great time, but there are two chairs that are vacant, Chuck’s chair and Nancy’s chair.

After the Democrats have a little childish hissy fit over a tweet that outed them as the leftists they are, Trump tweeted the truth, another reason he’s loved and appreciated. He tweeted that Chuck and Nancy, they don’t care about a government shutdown. All they want is open borders for more illegal immigration to come in so they can be eventually registered as Democrats. Trump calls them out. They harrumph, harrumph, and they fail to show up, claiming that the president is not worth their time. Trump wins.

This does not cause his supporters angst. It causes them to appreciate him even more. The world got to get another dose of Fauxcahontas yesterday. Elizabeth Warren was allowed to circulate and fan out there under the radar but out of the blue in an otherwise unremarkable White House ceremony, Trump focuses attention on Elizabeth Warren again, and now the media is focusing on this whole claim of hers that she is one thirty-second Cherokee. She’s never had any proof of it, other than the reference to her high cheekbones.

Trump expertly outed the credibility of her claim to be one thirty-second Cherokee right as the agency that she started is unraveling. And this is another huge story. What is happening and what is being learned about, this Consumer Financial Protection Bureau that Elizabeth Warren established under Dodd-Frank and is now under the control of Donald Trump.

And I think one of the reasons Elizabeth Warren and the Democrats are so outraged about this is because with Mick Mulvaney over there going through things, we’re gonna find out what kind of fraud and abuse has gone on. And we already know that money laundering has been taking place. We already know that this Consumer Protection Bureau has been levying fines against financial institutions, and then with the money collected from the fines, giving it to left-wing activist groups. There’s gonna be more like that discovered. Donald Trump supporters stand up and cheer!

People inside the Beltway never see it because the Drive-By Media doesn’t even cover it. They don’t want to see it. They don’t want to see Trump supporters cheering because their objective for over a year has been to separate Trump from his supporters. They have failed miserably. A judge ruled for Trump. And the only way the judge could rule, if the Constitution still matters, that Trump gets to name his director at that bogus and untethered slush fund called the consumer financial protection board started by Pocahontas. 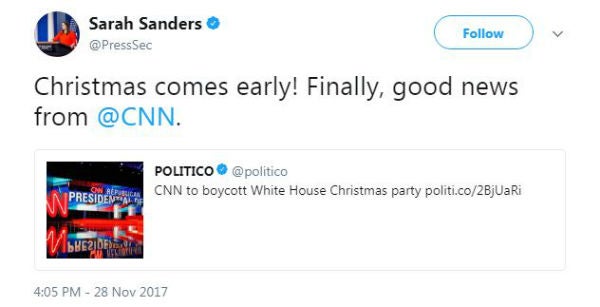 “U.S. Third Quarter Growth Revised to Three-Year High of 3.3%,” as predicted by me yesterday. Third quarter growth, 3.3%. We never saw that with Barack Hussein Obama, and when Trump pledged 3% or greater, they mocked him and made fun of him and said it wasn’t possible and it was delusional to think it! Even though in the eighties we routinely had 6% growth. We’re headed back in the right direction, and Trump supporters know it, and they applaud it. Gross domestic product grew at a 3.3% annual rate. Consumer spending (the biggest part of the economy) grew 2.3%.

You want to hear some stats on the economy to explain to you why Donald Trump still has his job and Matt Lauer and Harvey Weinstein and Charlie Rose don’t? The stock market is at an all-time high. Those three guys have been trying to talk down the economy to the benefit of the Democrat Party. Job openings: All-time high. Unemployment rate, U-6, is the lowest in 11 years! Consumer confidence: 17-year high. New home sales: 10-year high. New home average price an all-time high. Federal manufacturing: 24-year high.

There is a Trump economy. It is a rebound. There is a surging, growing economy.

The stock market was at 18,000 one year ago. Do you realize this? On Election Day, the stock market, the Dow Jones Industrial Average was at 18,000. This week, it looks to surpass 24,000. Which leads to a question: Would John McCain or any other Republican really torpedo this by trying to torpedo tax reform? Answer: Yes. Another reason why Trump’s voters love and support him because they’re fully aware that Trump’s opposition encompasses people in his own party, people Trump supporters have voted for in the past and are angry. Simply put, there isn’t a reason for Trump supporters to be mad at him. It’s just the opposite.