I said, “What are you talking about?”

“You told us on Tuesday the Senate was gonna pass the tax reform bill. You said they were gonna vote for it.”

I said, “It was just instinct. I didn’t know anything. I hadn’t talked to anybody. I just knew that it was gonna happen.” Well, I felt. I thought that it was gonna happen. So looking at why, did you hear what the New York Times did yesterday? Everybody is trying to figure out, okay, McCain and Flake have got nothing to lose here. I mean, if McCain and Flake want to hammer Trump it would be easy to vote “no” on this thing and head off into the sunset of Arizona and be at peace with themselves. If they really hate Trump and want to sabotage Trump it’d be easy to say, “No, can’t vote for it.”

But they’re both gonna vote for it. Flake not running again, McCain not running again. So what explains this? Well, the optimal answer to that is that these guys have finally seen the light after a year and gotten on board the Trump agenda, but that’s a bit much to believe. But look at what — and I don’t know if this a factor, but it may well be because all these people in the establishment turn to and look at the New York Times. And do you know what they did?

Remember when I used to do that? No. I never did it. When I was accused of doing it? I’m going back now 25, 28 years. I have long been accused of artificially impacting and affecting the outcome of legislation because the media routinely accused me of telling you to call members of Congress. And I said, “I don’t do it. I am not an activist. I don’t use this program for activism.”

My audience is smart enough to figure out to do this anyway if they want to. I do not tell people what to do. I don’t even tell people what to think. I just don’t give them much of a choice between right and wrong. And so here now the New York Times comes along and activist-ly urges people to get hold of these Republican senators and give them what-for.

Now, you may be saying, “Well, what’s the big deal?” Well, the big deal, yeah, we’ve known for a long time that the New York Times is the Democrat Party house organ. And we’ve known that the New York Times basically serves as a PAC for the Democrat Party. But this kind of seals the deal. And it illustrates there is futile desperation out there. And it is climbing, it is mounting, it is effervescing, and it’s overflowing. The frustration on the left. None of them can believe this is happening. They can’t believe Trump is still there. And let’s go to the audio sound bites.

As Trump succeeds, as the nation improves — I mean, the stock market now past 24,000, 52 Republican senators say they are going to vote for the tax bill. The president is succeeding on a number of levels, and with each new success, the Democrats mount a campaign that he needs to be gotten rid of under the terms of the 25th Amendment, that he is senile, that he’s incompetent, that he is mentally unfirm, that he is out to lunch, that he is simply suffering dementia.

MSNBC, CNN, a number of other Drive-By news outlets are once again raising this allegation. We have a couple of examples. David Axelrod last night on CNN with Anderson Cooper. Question: “Mr. Axelrod, reports on Trump’s seemingly reborn birther views and the Access Hollywood tape…” You know what this is really about? Trump had the audacity to retweet some video of militant Islamic atrocities. And these original videos were posted by a far-right-wing, so-called far-right-wing group in Britain.

And as you know, inside-the-Beltway, it is simply not permitted and it is unacceptable to relate or try to relate militant Islam to terrorism.” It is a religion of peace! There is no terrorism in Islam, and this is the way it’s always been. It’s the way it’s always gonna be,” and Trump comes along and blows it to smithereens and retweets video of militant Islamic atrocities. And of course the establishment in the U.K., the establishment here are beside themselves. This just isn’t done! And in their world, this means Trump is losing his marbles.

Now, this question here, you know, Trump’s denying what they say he said on the Access Hollywood video. “That’s stupid. We all saw it. We’ve seen it. Trump’s now saying it wasn’t him. Trump’s now saying it was doctored and made up.” Trump is toying with these people, but they think he’s losing his mind. And now his reborn birther views. Those are related to militant Islamic videos and other things. 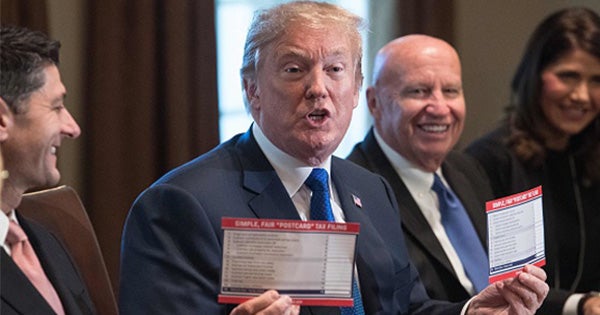 Janet Yellen, who’s outgoing chairman of the Federal Reserve, all of a sudden says she’s having nightmares about the national debt at $20 trillion, as she’s leaving. She never had a dream much less a nightmare about it when Obama was building it up. When Obama took orifice, the national debt was $12 trillion. When Obama leaves, it’s 20. He nearly doubled it. And so Trump’s right there with a tweet to Janet Yellen (paraphrasing), “Hey, it’s kind of interesting here that you didn’t even notice it when Obama was doing it.” And you’re just not supposed to call these people out that way.

And so when you do, when you call ’em out, when you retweet videos of militant Islamic terror that prove that there is militant Islamic terror, these people… They’re the ones that are coming unhinged, folks. The Drive-By Media, the left, the Democrat Party, they’re the ones coming unhinged, accusing Trump of it. So Anderson Cooper says, “David Axelrod, these reports on Trump, how concerned are you the president seems to be operating at a different reality when it comes to any number of topics?” 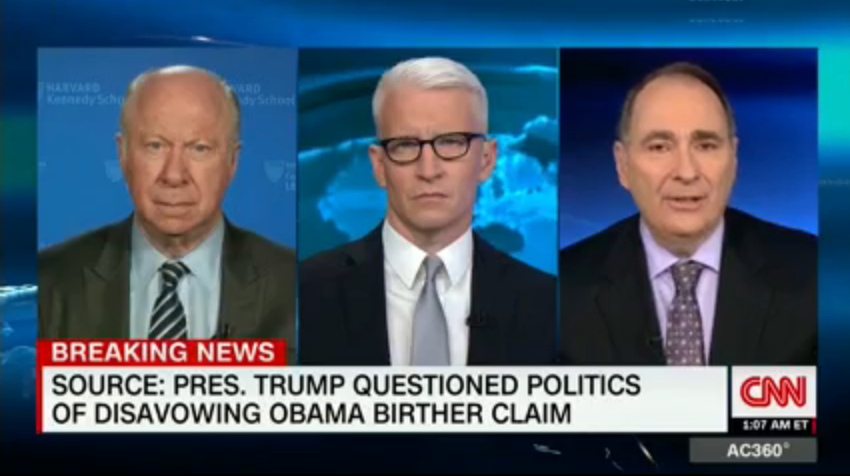 AXELROD: I am concerned, Anderson, because I sat next to the Oval Office for a couple of years. If the person who sits there is delusional, that poses all kinds of very, very frightening scenarios. And when you read, particularly the things that he’s saying in private, the denial-of-his own comments that were on tape, the rehashing of the discredited birther theory going back to the votes in the election and the notion he actually won the popular vote, these are delusional comments. It is very, very unsettling to think that the president of the United States would harbor them.

RUSH: Yeah, right. I’m sorry, Mr. Axelrod, but this doesn’t carry any weight. You guys have no ground to stand on. History revisionism. Trump is toying with you guys. Meanwhile, your accused, guilty perpetrators of sexual harassment are coming out with some of the most convoluted, twisted apologies. You talk about being in a state of denial. Look at The Full Franken. The Full Franken is an apology technique that Matt Lauer is attempting to use partially. And it’s bombing out. “I don’t remember it. I’m really devastated these women feel this way. I take a lot of pictures.”

You never admit it. You apologize for it, but you imply the women are lying. And this is gonna come back and bite Franken. It’s gonna get him in the end. They’re doing everything they can to hold on to him. But in the process here it’s Trump who’s losing his mind, it’s Trump who’s delusional. Here’s David “Rodham” Gergen, same program, Anderson Cooper. “David Gergen, they’re saying this is no different than all of his words and how he shapes his own myths and creates his own reality. So what are we dealing with here?”

GERGEN: The president occasionally has to make really, really tough decisions that are a matter of life and death, and you want a man of absolutely clear mind and able to absorb things. It’s reached the point, Anderson, where I’ve been wondering whether his family and some of the top people in the White House ought to be conferring among themselves about what might be called in other ways some sort of intervention, and really try to help him.

RUSH: An intervention! “Oh, we love Trump so much, we want to help him. We care so much about Trump, we want to help him. We love our country. We really wanted to give him a chance. We’ve stood aside and we’ve let Trump be Trump. But now we’ve reached the point that we can’t stay silent anymore. Trump must go, Trump’s deranged, Trump’s delusional. The nation is at risk. We might get killed. We’re all gonna die. The family has gotta move in and intervene and stop the guy.”

Meanwhile, it was CNN that refused the White House Christmas party invite on Friday night at the White House. You know, folks, it’s fascinating to watch all of this. Who would have ever believed we would be here. It’s November 30th. We are 11 months into the however many phony Russian collusion investigations there have been and are. We’re 11 months into all those investigations. Trump colluded with the Russians. They don’t have a shred of evidence yet. Mueller obviously doesn’t either based on the leaks that are coming out of his investigation. 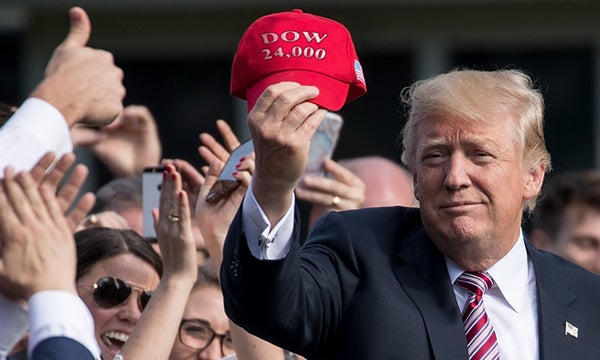 Donald Trump is still president. Donald Trump is prospering. The Donald Trump agenda is on the move. There is a momentum and an inertia, and none of the people in the media, the Democrat Party had the wildest — I mean, their worst nightmares this was not possible. This is the last place they thought they would be. Not only is Trump rolling and his agenda moving forward, they are imploding! The party that conducts accusations on the War on Women is finding that all of its top name brand people are lechers. You can’t tell me these people have any idea that they were going to be here.

Matt Lauer, Charlie Rose, Glenn Thrush, Garrison Keillor, Mark Halperin, Harvey Weinstein, three CNN editors, three NPR executives, two people at the New Republic are out of work, and Donald Trump isn’t. Donald Trump is still there, and the tax bill cleared the Senate or will when they have the vote.

Al Franken is floundering and looks to be the fool he has always been. John Conyers is in the hospital because of stress. A woman of privilege, a white woman of privilege has told this poor black guy in the hospital to quit, to resign, to get out of there, that he is the problem. James Clyburn of the Congressional Black Caucasians is pointing out that all of Conyers’ accusers are white women. Hollywood is damn near a smoking ember.

The entirety of the Drive-By Media teetering on the brink of ruin, and it is Trump who is delusional? It is Trump losing his mind? No. These people are losing theirs. I cannot impress upon you how none of them ever dreamt wildly that anything like this could ever happen, no matter who was elected president. No one could have predicted this wild year. But I predicted the Senate would end up voting for the Trump tax bill.

And I dare to point out to you that many of the reporters on all of these sexual harassment stories are Millennial women. And they’re gunning for Matt Lauer. And they’re gunning for Al Franken. They are not tolerant. They are not typical leftists circling the wagons because there’s something more important to them, and that’s been women’s studies and feminist studies. And they are a generation that’s simply not gonna put up with what their parents and grandparents have handed down to them.