RUSH:  Yesterday in New York City there was another James Comey book-signing event.  Conservative journalist Laura Loomer stood up — as many media people do whenever public figures show up — and started shouting questions at James Comey. 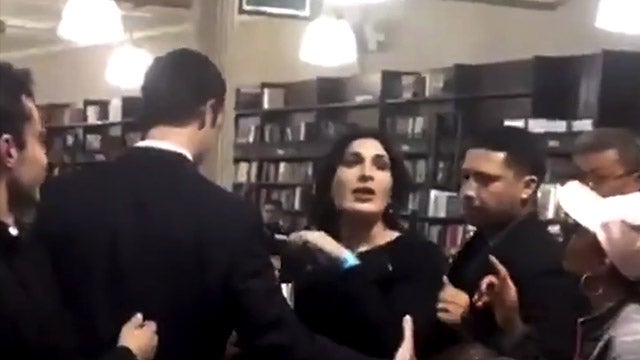 RUSH:  “Comey, you’re gonna get locked up.”  That was, again, Laura Loomer, a “conservative journalist.”  I don’t know where she “conservative journalists,” where she works. But, I mean, you have to know that that question is right out of my heart.  How in the world can you tell the president of the United States about this and lie to him and tell him that this is legitimate intelligence when you know that it’s nothing more than Hillary Clinton opposition research? 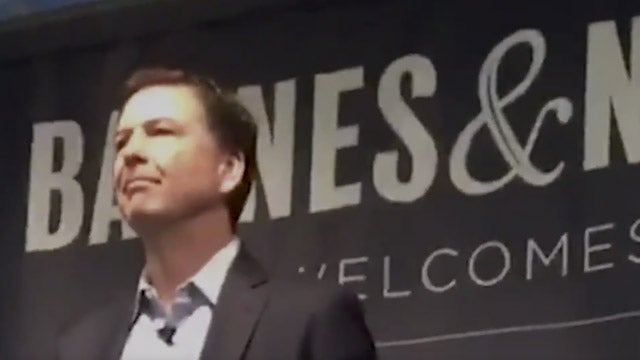 RUSH: All right. Now, she’s got a little bit of a tweet storm, modified tweet storm going on right now. And she says people have told her all her life she’s not good enough, never gonna amount to anything, and yet she woke up today to two links on Drudge from this event. And so she’s telling anybody and everybody, be what you want to be, be the best you can be and do it. Don’t listen to people who tell you you can’t do it.

That’s ever so true, folks. Do not seek out people who failed at anything and take their advice. They’re just gonna try to get you to join them in the failure. Do not waste time, especially if it’s something you know you want to do. Talk to the people who have succeeded in it. Talk to people who are successes in it and get advice or help from them, but don’t waste your time with people who failed at it. They have nothing for you, unless they know why they failed and can give you some positive advice in that way.

But this is one of the tweets in her storm. “Every single reporter who attended Comey’s book launch at Barnes & Noble last night and is attacking me should have their journalist card revoked for bending over and not blinking an eye when Comey and his staff said they will prescreen the questions people can ask.” So at these book signings, which Comey’s charging money to attend, they’re prescreening all the questions, and people got mad at her for asking.

She’s also saying that people are accusing her of acting like a liberal. And her reaction, her answer to that was, “No, no, no, I’m not acting like a liberal. Liberals don’t ask tough questions.” So it remind me when the Drive-Bys in the White House press corps chased Neil Munro all the way to the Washington Monument when he dared ask Obama a question during a no-questions-permitted presser in the Rose Garden. No questions asked. Every question screened.

By the way, in certain instances I can understand this. But I doubt my reason for doing it is Comey’s reason. You know, when I did the Rush to Excellence Tour, sometimes we did audience questions, but after the first two times or three times, I said we’re gonna have to start prescreening them. The reason, you don’t know who’s gonna start standing up and preaching and saying things that make no sense and asking questions that nobody wants the answers to, and time is kind of precious.

So for that reason I always ended up screening the questions. But not for content. I didn’t screen out tough questions. I just wanted to make sure that nobody ended up being bored by somebody that was not interesting, entertaining, did not have a question people were interested in the answer to. In Comey’s case, I don’t know if that’s why they’re doing it, in the interest of time, or if they just don’t want some tough questions. We won’t know.

I got one more call here about the — No. You know, Snerdley is flooding me with pilot calls now, which is delaying my foray into my Comey predictions that I’ve only been promising the audience for the whole hour and you keep flooding me with this pilot stuff, and I have to take the pilot stuff. Here’s why. There are these calls up here, and if I ignore them right now and start into the Comey segments that I have planned, and, say, 45 minutes later go back to the phones and the first bunch of calls are about the pilot, I haven’t talked about that in an hour and a half. That’s not good. So I tried to take the first call about the pilot, get it done, and then move on to Comey.

RUSH: I checked the email during the break, and there’s two or three that I found, people who say, “Hey, Limbaugh! How do you know Comey knew when he showed Trump the Steele dossier that Hillary paid for it?  How do you know that?”  Come on, folks! (laughing) Okay.  Let me answer that.  In fact, I already have earlier in the week, because I anticipated this very question.  Comey tells Trump about the Steele dossier on two separate occasions, January 7th and January 26th.

The January 26th event is when he tells Trump about it and says, “You need to know about this kind of stuff! You’ve said you don’t need a daily intelligence brief, but you do, because this is the kind of stuff that’s out there.”  When Stephanopoulos asked him in the interview that aired on Sunday night, “Well, did you tell Trump that that was the product of the Clinton campaign?” Comey could have easily said, “I didn’t know at the time, George.  I didn’t know.”  But he didn’t say that.

He smiled and said, “No.  And, in fact, I don’t even think I referred to it as ‘the Steele dossier,’ George.”  Now, Laura Loomer in her question of Comey at his book signing last night makes mention of this very thing.  It’s one of the reasons I love what she did last night, ’cause I think that reveal and one other are the only two things anybody needs to just blow Comey out of the water on all of his assertions here, the other being that he knew or thought that Hillary was gonna win.

And so whatever he did on October 28th saying he’s reopening the investigation, it wasn’t gonna hurt her. He did it so that it would not come up after she won.  He wanted her to be elected with no taints following her election.  So he tried to bury the whole email investigation once and for all by opening it again on October 28th for a couple of days and then announcing, “Guess what?  We just spent two days going through 150,000 emails.  We didn’t find a single thing.  She is so innocent, it’s incredible.”

Then she goes on to lose.  Nobody thought she was gonna lose.  But Comey’s plan was to fully exonerate her a second time because, as he has admitted, he thought she was gonna win. And he times this for October 28th figuring that there’s not enough time for it to hurt her. Plus, his conclusion two days later is gonna be, “We didn’t find anything.  We opened the investigation again!  We looked at it twice.  We found nothing.

“She’s clean and pure as the wind-driven snow.”  That was his intention.  The whole thing was blown to smithereens when she loses.  Comey admits that he did what he did because of polling data.  That’s not what law enforcement does! We’re told that justices on the Supreme Court, federal judges, all judges do not pay attention to polls, don’t pay attention to election results.  We question that, but that’s the image-making that goes into it.  We’re told that.

Comey could have told Laura Loomer that when she asked him last night. He didn’t answer anything because she wasn’t a prescreened question.  But he could have shouted, “I didn’t know it!  I didn’t know.”  He’s not saying he didn’t know.  Now, one other thing about this. I mentioned this earlier in the week. Devin Nunes, the Republican chairman of the House Intelligence Committee has requested for I don’t know how long to the point now of subpoenaing all kinds of documents that the FBI has dragged their feet on supplying.

Finally, Nunes got what he has long sought and most of it was redacted.  Now, I am told reliably that the documents that Nunes sought contained the, quote-unquote, “proof” or evidence that Comey knew that the Steele dossier was Clinton work product long before January.  For crying out loud, they had an ongoing relationship with Christopher Steele.  The fix was in from the get-go getting Trump even before the election.

After he shocks everybody and wins, then they begin retooling everything to derail the transition.  There’s no question Comey knew it was oppo research — and not only that, he knew that when they sought a FISA warrant to spy on people.  They knew this.  And not just Comey.  McCabe, too, and any number of other people there knew.