Comey Book Backfires on The Circus

RUSH: Now, I had mentioned that things are starting to backfire, even on the Comey book. And we had mentioned this. In fact, I predicted that this was gonna happen, we played that prediction for you last Friday. I predicted that last Monday, a week ago today. And, look, folks, I’m sorry. I don’t mean to be sitting here: “I told you so, I told you so,” nah-nah-nah-nah. But I did. And nobody else is gonna remind you. And it’s the kind of thing you need to know because it’s worth the time you invest here to listen to the program.

I want to share with you some of the most recent evidence that we have. We haven’t talked about this in a long time, but there’s a show on Showtime that airs on Sunday night, it’s called The Circus. And it’s about Washington politics. And it’s produced by these guys that claim they are from the No Labels movement, which means they’re a bunch of RINOs. They are Republican-in-name-only guys who don’t like conservatives and think conservatives have ruined the Republican Party and that conservatives paved the way for Trump. 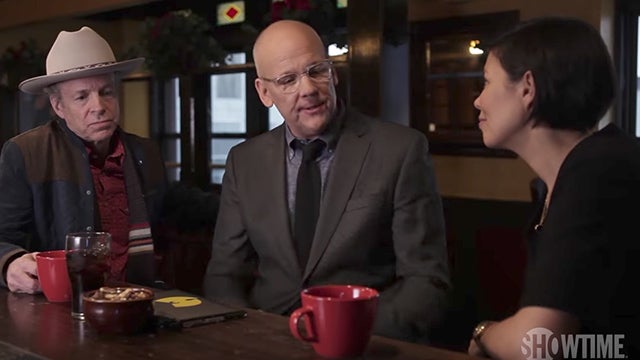 And these guys want to be friends with the people that run the show in the Washington establishment, so they publicly distance themselves from the Republican Party, call themselves No Labels and claim that they are not ideologues, they are open-minded, they see the good in both sides, which, of course, there isn’t much good on the left. I mean, if you’re honest about things and if you really have core, principled beliefs about the Constitution and the country, what is there that we have in common with a bunch of people who want to tear it apart and rewrite it so that the country is no longer the America as founded?

But they don’t see it that way. There is no crisis, they’re all for immigration, amnesty, that kind of thing. One of them is Mark McKinnon, who ran all the media for George W. Bush’s campaign in 2000, 2004. John Heilemann, whose partner used to be Mark Halperin until sexual harassment reared its ugly head and took him out. And let’s see. Who else is on this show? It’s Heilemann and Mark McKinnon and I forget — there’s three people that do this thing.

On Sunday night’s episode called The Circus, here’s Heilemann talking — oh. It’s Alex Wagner. She’s a former MSNBC infobabe. So you can see here that the No Labels gang — (interruption) She’s not so smart, you say? What was your first clue that Alex Wagner is not so smart, when did you figure that out?

RUSH: I mentioned this in the previous hour. Showtime’s Sunday night show called The Circus, which is put together by these No Labels RINOs. Hell, now some actual Democrats, Alex Wagner, John Heilemann. And the subject here is the Comey book.

And to set this up we’ve got one, two, three of these bites here. And the chronology of this — and this is just illustrative here of how the Comey book has proven to be a gigantic letdown and now may even be a problem for them in terms of having compromised the investigation of the august Mr. Integrity, Robert Mueller.

And it’s not the Comey book where this magic is gonna happen. Now the Fusion GPS guys are saying, forget the Russia investigation. You need to look at Cohen. The Circus show on Showtime is telling everybody to look at Stormy Daniels. The point is with this group of people, there’s always a next thing that is gonna bring down Trump.

And every one of those next things, when they happen, they don’t bring down Trump. So now they have to come up with the next thing. That’s how they continue to function you within their sickness. The next thing, the next thing is gonna be the one that gets Trump. And so here we have John Heilemann, cohost, and Alex Wagner, cohost, talking about the Comey book and the Mueller investigation.

HEILEMANN: The Comey book comes out on Tuesday. What Comey does, beyond driving Trump mental, is really shines the spotlight on the Mueller investigation. Right now for half of the country, Bob Mueller is the man they’re waiting for to save America.

WAGNER: Stormy Daniels wraps up all of these allegations about Trump, his womanizing, his intimidation.

HEILEMANN: So you get this California lawyer, Michael Avenatti, and how these two opened up this seam.

WAGNER: And this may actually be the thing that undoes Trump.

Okay. The next bite is from Heilemann. And remember, now, this is like a documentary. They film this thing every day. And when they edit it together, then it actually comprises a week, the previous week in Washington, which is also called The Circus. So here’s the next bite in this show. The days have advanced now, and whereas the previous bite was before Comey’s book had come out, this bite comes from after Comey’s book hits the bookstores.

HEILEMANN: Jim Comey’s book is now on sale. Is Bob Mueller watching this going, “Dude, you’re f*cking (bleeped) my case up here. Like, what are you doing?”

DERSHOWITZ: He should be.

RUSH: Well, now, wait a minute. See, the first bite, it’s from the same show, but it’s from a period of time before Comey’s book comes out, and they’re all salivating, and they’re wringing their hands, and they can’t wait because this book is gonna do it. Finally we’re gonna get Trump, we’re gonna get Trump. And the book comes out. And you hear Heilemann say, okay, Comey’s book is now out. It doesn’t have any silver bullets. It’s got nothing that’s gonna kill Dracula. It’s got nothing that is not already known, nothing new in it. And in fact it’s very petty and very small handed. It’s really bitchy.

And this is not what they were expecting from Comey. So here’s Heilemann now saying, “Okay, the book’s on sale. Is Mueller watching this, “Dude, you’re screwing up my case here, like, what are you doing?” Mr. Heilemann, how did you not know this was gonna happen before the book came out? Comey’s writing a book on all this, and it happens to be of the investigation. You only realize after the book hits that it’s providing big conflicts with the investigation?

But Heilemann’s mad because it doesn’t have the smoking gun. This is another thing that makes me ask just how stupid are these people? I mean it, stupid. If Comey had a smoking gun, it would have appeared in his testimony. Why can’t these people figure this out? Here you have the FBI director, and he’s testifying all over Washington under oath, and they think he’s holding something back?

They think that because they do it — and Heilemann is one of these guys that does this, Heilemann and Halperin would embed themselves in a campaign and they’d learn all kinds of stuff that would be relevant if they reported it before an election, but they don’t. They keep it, they hold it, they put it in their book, which comes out months after the election, stuff that nobody knew, and it makes them a lot of money, gets ’em a lot of media interviews.

And I guess they’re thinking Comey would do the same thing, except Comey is not a reporter. He’s the FBI director. If Comey is testifying and holds something back for a book or for his memos, then Comey is in deep trouble. The fact that Comey had no smoking gun under testimony, my point is, should have told all of these wizards of smart that Comey had no smoking gun! Is this so hard to understand? It’s not.

If Comey had something that was gonna get Trump, he would have testified to it. He would have had to. So now they’re all disappointed. And now it’s really bad because Comey may be screwing up the Mueller investigation. And the person that these people now think can save them, forget Comey, forget Mueller, now it’s on to Stormy Daniels. Here is cohost Alex Wagner talking to Jennifer Palmieri, former Clinton communications director.

JENNIFER PALMIERI: If we, like, step back and look at this moment in America and you have, you know, somebody who I believe to be a misogynist and a sexist, beat a woman to become President of the United States, maybe this is the collision course we were on. We’ve been sort of holding ourselves back and you just see all these ways women aren’t doing that any more, including Stormy Daniels, who’s like, nope.

PALMIERI: Yeah. Because she’s been willing to show all of her shortcomings, she’s untouchable in some ways. There’s not anything that you can — they can say about her or to her that undermines her or hurts her. And that’s when you become so powerful that you can’t get taken down by these guys.

RUSH: Was this a parody? Am I listening to some valley girl actress here? (imitating Palmieri) “If we step back and take a look at this moment America, you have, you know, somebody who, like, I believe to be a misogynist a sexist, beat a woman to become president of the United States, maybe.” And now Stormy Daniels is the definition of female strength? Stormy Daniels personifies the backbone American women have been looking for all along to get rid of Donald Trump.

So they’re grasping at straws. And now they’re hoping that it’s all gonna be revealed in the investigation of Cohen. And that’s not even Mueller. That’s the SDNY, Southern District New York. The U.S. attorney’s office. Of course Mueller’s got a connection there. He referred all this criminality to them. Isn’t this amazing?

And, now, have you noticed — and you are privy to this because you’re listening — you’ve noticed the Russian investigation, it’s just been dropped, in terms of a vehicle with which to get Trump. Mueller’s still going on. He’s still looking and the media’s still reporting on it, but all these people are now admitting, “That isn’t gonna do the trick.” And it’s just gonna fade away like this. There won’t be any official announcements. “We looked here, we couldn’t find anything. Donald Trump is innocent.” That will never happen.