The Next Time You Worry About What People Think of You, Think of Tiger Woods

TODD: Kathy in Owensboro, Kentucky, you’re on the Rush Limbaugh program. Kathy, I’m glad you called to talk about our dear Rush, as Todd Herman sitting in for the Maha, who’s in heaven.

CALLER: Thank you, Todd. Good morning. It’s such a pleasure to speak with you. I enjoy your show as we navigate this new terrain. You all are doing an excellent job. I just wanted to say I remember listening to Rush one time when he said, “If there’s one thing I wish I could do for all of you people out there, I wish I had a magic wand that I could wave over you and you would not care what others thought about you.” 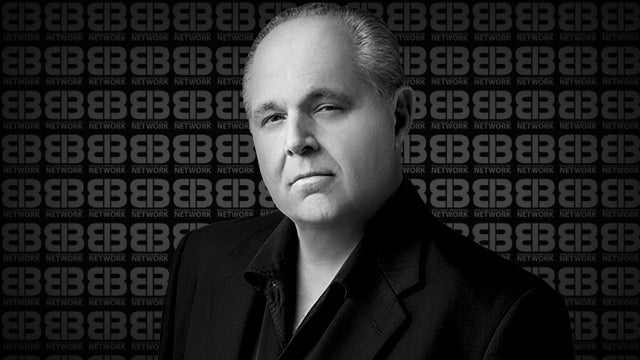 CALLER: And that just… I just stopped. I was like, “Oh, gee.” And it just kind of resonated. It makes you realize just how much we just — we don’t speak up because we think of what others are gonna think of us. And Rush just pounded that home. And I’ll never forget him saying that. I can hear him saying it right now in my head.

TODD: You know, Kathy, you’re one of millions of people who can hear this advice from Rush. And you know what’s phenomenal is how many people I’ve communicated with since Rush’s passing who’ve told me personally or sent me emails, hundreds of them — and I’m woefully, woefully behind in trying to respond to as many as I possibly can.

And I’m just a guy who fills in. But they’re all continually talking about life advice and items like that. And yet, you know, I’ve also talked to people… I talked to a woman who took Rush to Afghanistan, and she talked about how gracious he was to people and how curious he was and how he sought information and listened intently to people.

He had this great concern for this woman, Peggy O’Ban, who took him to Afghanistan. “Peggy, don’t get out of the Jeep. It’s dangerous,” Rush pulling her back in, and she’s saying, “No, this is my job. I can do these things.” So do you demonstrate this behavior, Kathy? Do you go about speaking truth in the face of tyranny?

CALLER: Absolutely, yes. I try to do it in a strong way without coming off as being hateful —

CALLER: — if I could use that word. You know, and I think that’s another thing. We have been conditioned here, of late, to just be hateful, and it’s okay. And Rush did not… You know, he gave us the information we needed, we’ve got it stored in our brains and in our hearts, and we’re gonna carry it on.

TODD: Yeah, and that speaking up, I heard Rush do an incredible monologue about this. I believe it was a Pew study that a majority of conservatives do not exercise their First Amendment rights and a majority of American Christians do not exercise their First Amendment rights to speak out. In fact, you know, I spoke about this on my morning show this morning that because I’ve been in a red state, I’m just now waking up to, “My goodness.

And Rush challenged us in that monologue, as I recall. If you want your country back, you need to speak out.

TODD: I am just sitting here enjoying just hearing a man who did use his First Amendment rights to all of our benefit. You know, people who defy the odds like Rush did in every, every capacity… Rush defied the odds because of hard work and hustle and optimism, too many times people who pull that off, they defy the odds. They forgot how hard that was, and Rush never forgot that.

And, you know, Rush, of course, loved the game of golf. And Tiger Woods, our prayers for him, was in a serious accident, and I hope he will recover from this. Apparently, he’s got a broken leg that required surgery. And America loved the comeback story of Tiger Woods when he won the Masters golf tournament two years ago, Rush made the most unique observation about Tiger Woods and all of you. Listen to this.

RUSH: I want to say something to you, because I know every one of you — almost without exception, every one of you — can learn from this. If you waste time worried about what other people think of you, I want you to remember two words: Tiger Woods. If you ever worry — I mean — this has been a pet peeve of mine, people so concerned with what other people think. It’s what drives Washington. The Republican Party is obsessed with what the media thinks of them, obsessed with what the Democrats who are perceived to run that town think of them. And it’s paralysis.

But for those of you worried that you can be eternally damaged or hurt by what people think of you, never forget Tiger Woods. How many years ago was it, 12 years now, 11, 12 years ago, Tiger Woods was the biggest joke in this country. He had reached the pinnacle that few ever reach in any endeavor, and in one Thanksgiving weekend, it all came crushing down. And he lost not everything, but he lost a significant amount of things that were of dire consequence and importance to him, including his wife and for a time he was worried about losing his kids.

He lost all of the respect, and he knew that when he began playing golf again after going through the necessary rehab, that no matter where he went, the only thing people were gonna be thinking about was all of the controversy involving that news which led to his decline and fall. He couldn’t escape it. When he first started playing golf again, people aren’t looking at him to see how well he plays. They’re looking at him and he thinks they’re laughing. But he had to fight through it.

Then he has all of these injuries and all these back surgeries. And then there’s that video where he’s pulled off the side of the road and can’t walk a straight line because his doctors had him on some kind of drug cocktail to deal with the pain and everything else from all of these back surgeries that he’s had in his never-ending quest to get back to being able to play professional tournament golf. 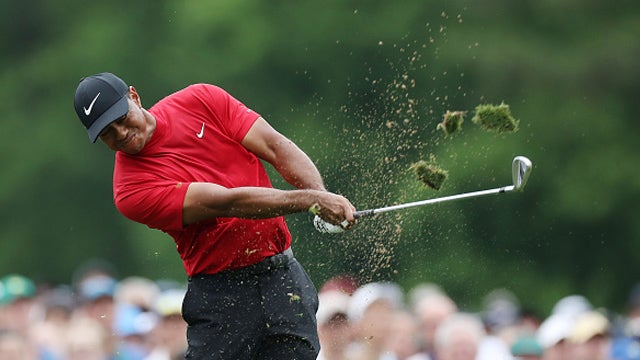 His first trip back to the Masters, the club president at the time after the decline and fall, after the story about all the hookers and the girlfriends and all of that, the sex rehab, all of that, the most humiliating stuff — and every bit of it was public. Every step he made, everything he had done was made public, and there wasn’t anything about it that was redeeming. It blew up every image of him anybody had. It destroyed everything.

So bad that on his first trip back to the Masters, after all of that, the then chairman of Augusta National at the time, Billy Payne, felt it necessary to make a speech on the opening day of Masters week about how the Masters is not crazy about all that immorality in people that don’t treat things with respect. It was a direct message to Tiger Woods. And he had to take it.

People that had treated him as the greatest on earth were now mocking and laughing and lecturing and preaching. I have people ask me all the time, “Do you think Tiger will ever win again?” I said, “I don’t know.” They meant win a major, which he did yesterday. So now he’s up to 15. Now he’s three away from tying Jack Nicklaus’ record.

Prior to yesterday people didn’t think it was possible. One win, and now everybody says, “Ah, look out! He may even do it this year,” because the next two majors — well, in the United States, Bethpage Black, which he has won there on Long Island and Pebble Beach, the U.S. Open in June. Pebble Beach, which was the site of his greatest victory, beat the field by, what, plus 12 or plus 15. It was an incredible tournament.

So now people are talking about he may be able to come back just in one victory. But people ask me, “Do you think he can win a major?” I really don’t know, but I’m gonna tell you — I don’t know Tiger, but I’m gonna tell you what I think happens. Whenever he plays golf, you’ve got the gallery, and he knows. You can see the gallery as you’re playing. He knows that they’re looking at him and thinking about all that stuff they learned about him that he hoped nobody would ever know.

Now, 20-some-odd years later, he comes off the 18th green having won again, something nobody thought he would ever do, and there is his mom and his kids, and the cycle is completed. If there is ever any doubt in your mind that you think you have been humiliated and embarrassed and put down to such degree that you can never again face people, just think: Tiger Woods. It is not only possible. America loves a great comeback. 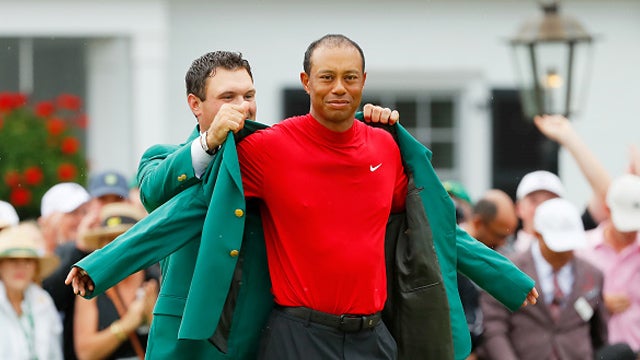 Exactly my point, folks. We’re not a racist country. If we were, the wealthiest woman in America would not be an African-American, overweight TV star. And I’ve maintained that for I don’t know how many years. Could America love a comeback story any more than this one? Do you wonder what it feels like to have literally the entire world…? Let’s just say the entire country. 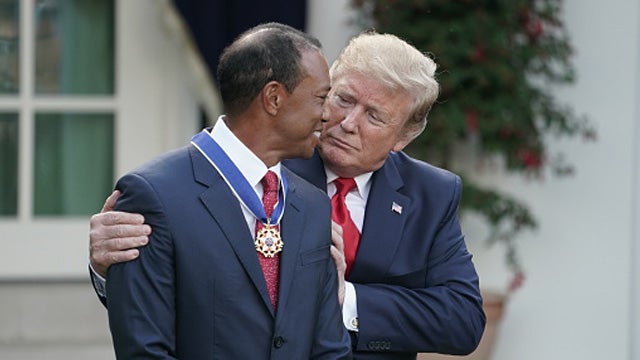 He is genuinely appreciative of the factors that came together for him to return to championship form. One of the things I’ve admired about Tiger Woods is he’s shown the way how to be a friend, how to remove politics from his public comments. You know, he and Donald Trump have been friends for years, and he played golf with Trump and Jack Nicklaus about four or five weeks ago now.

So Tiger Woods shows that not only can you come back, but that you can regain the respect and the love and the adulation. And I tell you, the people playing the game of golf are happy as hell he’s back. Bigger TV audiences, better everything. So the next time you get worried about what people think of you — and it will happen maybe in (chuckling) 10 minutes from now, 20 minutes or whatever — just remember: Tiger Woods.

TODD: People who didn’t know Rush didn’t know approaches like that. If you have The Limbaugh Letter, look back through it, because Rush interviewed Tiger Woods’ father in that. Life lessons will continue.