KEN: I get a little goose bumpy when I think about all of us either growing up or transitioning in a good way with Rush Limbaugh. I don’t know how many times as a radio host throughout my career I have said myself or someone has said to me when we’re discussing anything…

“How’s the EIB doing it? What would Rush do?” And I think he was on that cutting edge — his words — of societal evolution long before the fraud of climate change and so many other fakeries happening in the world. And that was some of his funniest stuff. I thought it was. I just thought the climate freaking out that took place in this country — and you know how it works. If you have a different opinion about why weather events occur, then you must be an enemy of the state. 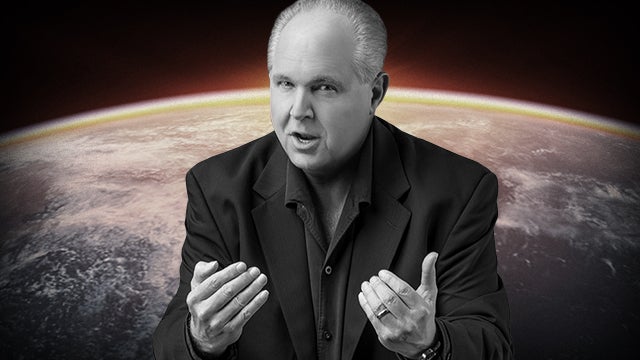 And Mother Nature is merely another poor victim of capitalism and uncaring, unfeeling, mean-spirited, extremist human beings. Do you realize there’s not gonna ever be another normal weather event ever again? A thunderstorm, a tornado, they’re gonna attach… They already do.

Every standard-operating meteorological event they treat as something special now, as something unexpected, as something unprecedented, and it’s exactly because they have a political agenda attached to this. You know what’s really scary? I think… You know we sit here and we talk about media bias and how the media’s thrown in with the Democrat Party. I think it’s worse than that.

It is bias, but it’s gone beyond that. I think now that the media exists to defend the state. The media exists to defend the Regime. The media considers itself to be part of the state, the government, whatever term you want to use. But “state” has a special connotation to it in this lingo the way I’m using it. It used to be that the media was suspicious and doubtful. You remember the old phrase — what is it — “holding truth to power” or something?

When they go to talk to a guest, some special meteorologist expert or hurricane specialist, there was always a link to climate change. We had this Ron what’s-his-name from NBC who actually said that the United Nations panel on climate change, once they get the document signed, it’s designed to stop these kinds of hurricanes, and the media doesn’t question it. The media doesn’t oppose it. They don’t question it. They never even doubt it.

They just report it, and when anybody comes along and does the job the media used to do — which is doubt and suspect what people in power tell U.S. — we get attacked because we are then portrayed as enemies of the state. I think that’s really what’s going on with the media these days, in addition to whatever left-wing bias. But they have now grown to become one with government, one with the idea of Big Government. They consider themselves to be part of it. The fact that they’re all Democrats is icing on the cake.

But it’s the power that goes along with being part of the state. It’s the connections. It’s everything. And anybody that comes along with an opposing view — anybody that does not accept whatever the government says about anything — is immediately targeted, held up for ridicule.

Major weather disasters — which used to be normal and constantly occurring — are now portrayed as dramatic, drastic, special, one-of-a-kind. Every damn one of them is one-of-a-kind, and there’s always a reason. Humanity is causing it, not Mother Nature.

If you agreed with George W. Bush, you were the problem. You were a suspect. You were an enemy of the state. So the state is liberalism, whether it’s in power or not. And anybody that takes an opposite point of view or questions it becomes an enemy of the state. And it’s on that basis that you are reported on. It’s on that basis they tell jokes about you. And it’s all done to discredit critics because the state must never be wrong.

The state must be infallible, and therefore the journalists reporting for the state — not on the state, not about the state, but reporting for the state — must also be infallible. And somebody questioned them. This no different than questioning the pope. You can’t do it! Except they can. The left can ’cause the pope doesn’t conform with the state, particularly when it comes to abortion. So the pope is also an enemy, the Catholic Church is, ’cause it doesn’t conform with the state.

I’m an enemy of the state, because I have not bought hook, line, and sinker that every drop of rain that falls, every gust of wind over 30 miles an hour is because of climate change and therefore my fault and your fault, ’cause that’s flat-out BS. And it takes a special kind of stupid to acquiesce, to go along, to not think in a challenging way, to not be suspicious, to not even question it. And that’s how we get to a point where an NBC reporter can actually tell people that after a piece of paper is signed at the United Nations, hurricanes will be stopped. 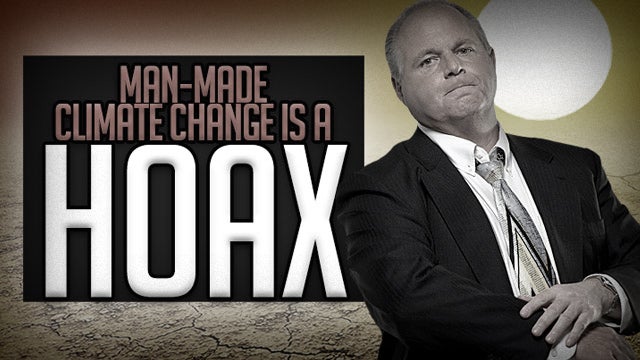 And the blind observance to the state is the greatest threat this country has, because when you have the wrong people in leadership in the state, you can say good-bye to the United States as founded. That is why the Founding Fathers granted the press constitutional responsibilities. The press is the only business in the country that has constitutional freedoms specifically spelled out for the express purpose — and Founding Fathers hated it.

They were criticized and ridiculed left and right. But they knew that was how to do it. That was the check on the collection of and the concentration of power, by always doubting it, by showing it to be wrong when it was wrong, by causing people not to be blindly obedient. But yet that’s where we are.

KEN: What a perfect segment to download and play for your neighbor that has four masks on right now.

KEN: This is the Rush Limbaugh Show, as we remember the words, the wit, the wisdom of Mr. Rush Limbaugh. And it is really an honor to be here with you. It is a very bittersweet, surreal moment in radio history. But you listening makes it that much more special.

So I want to continue on the climate change theme because I was listening to Rush’s earlier segment, and he said the term “special kind of stupid.” And I thought, “That may be the most wonderful thing Rush Limbaugh has ever said about the media.”

Think about how nice they must feel today, someone like Don Lemon or Brian Williams. “I’m special,” they must be saying. “Rush made me feel special. Even though we’re working and we work at MSNBC.” I didn’t say that; I was just thinking that out loud. But in the meantime, there’s more from Rush right here on this issue.

We got a serious thunderstorm, and they blamed it on the rocket launches. If you don’t, you’re not old enough. Trust me, I do. The media opposed rocket launches because they thought it was gonna lead to warfare. In the 1970s and 1980s, the media-left blamed, quote, “extreme weather” on air pollution due to industry. Remember acid rain and all the cities that were gonna be destroyed by acid rain?

The media-left opposes industrialized states and businesses, and so how their enemies live is gonna get blamed for whatever they can most easily sell. If they want to you hate Big Business, then blame the weather that affects you every day and tell you that it wouldn’t be this bad if it weren’t for what Big Business is doing or if we weren’t testing nukes or if we weren’t launching rockets. 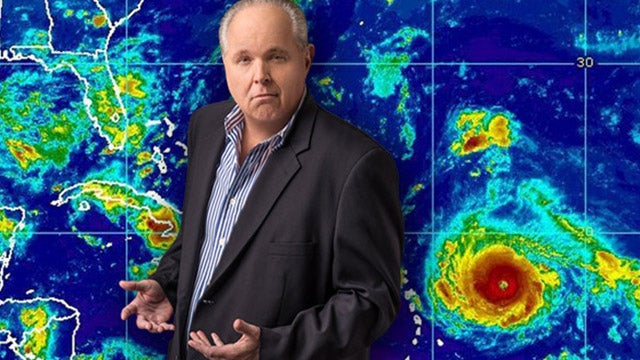 Well, if you listen to them, capitalism is. Our progressive, advancing lifestyle, our SUVs, our air-conditioning is causing climate change. Our output of CO2, which is a direct result of our civilization and standard of living improving, and they blame that because they don’t like capitalism. It’s a threat to socialism. Socialism is where they are fully empowered. In Capitalism, they’re not; they resent it. What has always stunned me, not just about weather and climate change and how it’s dramatically didn’t today, you can read…

Like Drudge is getting a lot of grief today in places like Popular Science where you would expect… Popular Science, you would expect it to be about science. It’s not. It’s about politics. So Drudge advances on his website the same theory I’m advancing that there might have been a little bit of global warming hype in the warnings and forecasting the hurricane, and they think it’s the most outrageous thing in the world. You’d have to be a Looney Toon to think that.

Now, why do they think that? They’re not even suspicious, and it’s because they have totally bought into it. They have become totally obligatorily acquiescent to the state. Journalists are supposed to be curious and doubtful and distrustful. But they have been overtaken by what I call “a special kind of stupid,” defending the state on every single premise and dismissing any criticism as illegitimate. There isn’t a one of them that hasn’t bought into mankind is destroying the planet.

And I remember when practically all journalists doubted and were suspicious of government and investigated and looked into some of these claims that government would make, and in some cases it irritated U.S. because there were honest people they were trying to destroy. But the difference now is that the media acts as though it is a branch of government charged with defending and protecting the state, and that is exactly what’s going on.

That is at the root, I maintain, of everything bothering U.S. We call it media bias. We call it unfairness. We call it a rigged game, whatever. What it actually is, is that the media is the state and they have taken on as their job, as their responsibility, to defend and protect the state and destroy anybody who criticizes the state. Now, you mark my words — it’s already true now. — there will never be another normal weather event ever, and there’s obviously a total absence of any critical thinking in our country. There’s just total buy-in, acquiescence to the state.

This from the U.K. Independent. “World Has Three Years to Prevent Dangerous Climate Change, Warn Experts — Since the 1880s, the world’s temperature has risen by about 1C because of greenhouse gases resulting from human activity.” Do you know what happened off the coast of North Carolina this week? Well, I don’t know if it actually happened this week. It was discovered this week. You know what happened? A new island. A new sandbar just popped up out of nowhere. It’s next to a known island, but out of nowhere they noticed there’s a brand-new — and it’s not a sandbar. 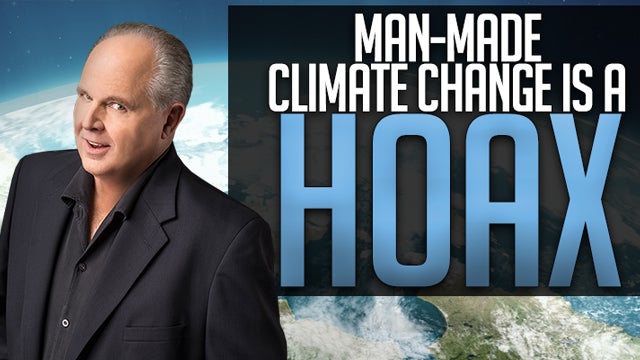 KEN: You’re listening to the EIB Network. This is the Rush Limbaugh Show.