RUSH: They’ve gone to Q&A at the press conference and Trump is calling on Katie Pavlich of Townhall. He’s not calling on the New York Times, the Washington Post, CNN, and they’re getting ticked. They’re getting angrier and angrier, and this is one of the ways Trump is fighting back.

Let me review for you what’s happened so far in the press conference, because it has elements here that relate to what’s going on with this foreign policy shadow government attempted coup against Trump. He starts out calling Netanyahu his friend. That’s big. Netanyahu has not been a friend of the United States government for eight years. Do not doubt me. That’s big.

One of the things that they are reporting is that the shadow government that Obama has, led by Ben Rhodes, who is one of his primary advisers and whose brother is at CBS News, as an aside, one of the things that the Drive-Bys are reporting that cannot be confirmed — it’s another one of these things that — well, it’s not really a leak, some Drive-Bys claim they have Obama people telling them this, but it’s strange. It’s a tough thing to — but I’ll just tell you what it is.

According to noted Drive-By Media people, the primary reason that Obama has established this shadow government is to protect his nuclear deal with Iran. Supposedly there are secrets in this Iran deal that, if they were to ever be learned, the American people would be outraged. And Trump, even before today, has made clear that this Iran deal is not gonna see the light of day, that the Iranians are never gonna get a nuclear weapon.

One of the many addendums to the primary focus that Trump’s in trouble because the Russians stole the election and he worked with ’em, that’s the real fake news driving this. One of the subsets is that Obama is desperate to protect the Iran deal, and they do not want Trump getting anywhere near revising it or even exposing it. We don’t know what the secrets are. We don’t know what is so devastating in the deal that, if these details are to be learned, there would be hell to pay.

All we know is that one of the primary justifications for the deep state, the embedded Obama shadow government to sabotage Trump is to protect the nuclear deal that Obama made with Iran. And so Trump opening this presser, pretty much saying screw Iran, they’re never gonna get a nuclear weapon while I’m in the White House is Trump throwing the gauntlet down to these people. This is Trump in his own way joining the battle. The problem is they’re all working in the shadows. We don’t see them. We don’t know who they are. Well, we do. Not by name. But we know where they are, and we know the kind of people they are, and we know that they do not share the vision of this country as founded, as you and I do.

So Trump coming out and openly claiming, talking about the Iran deal, that his administration is gonna stop Iran from ever developing a nuke, I don’t know what these secrets are, but if they’re that deep, if they’re that bad — it’s obviously gotta be based on Iran getting a nuclear weapon, doesn’t it? Isn’t that the one thing you and I would not tolerate if we knew was in the deal?

Trump has already enacted sanctions against Iran because they launched missiles. He said the United States will help make a good peace deal, stands with Israel against the struggle of terrorism. Netanyahu thanked Trump and Melania for the warm welcome and the hospitality, said he deeply values the USA. So that’s how the thing began and they’re now getting questions, and Trump is not calling on the traditional ABC, CBS, NBC people, at least when I was watching, he hadn’t.

In addition to that, Trump met with retailers today, this morning at the White House. He said that tax reform is the best way to influence the economy. Right after Trump said that, the Dow Jones Industrial Average jumped up 30 points, and at the time the show began it was still rallying. What Trump wants — and he said this in the meeting with the retailers — lower regulations, he wants more jobs. The retailers told him they’re against the border tax, it’s a 20% VAT tax that Trump supports. They don’t want that tax, and they told him that.

It’s also a Republican plan to tax imported products. Looks like a tariff, walks like a tariff, it is a tariff, nobody’s calling it a tariff. They’re calling it the border tax. Some of the people at the retail meeting, Jo-Ann Fabrics, Target, AutoZone, the Gap, Tractor Supply, J. C. Penney. The AutoZone guy said (paraphrasing), “I’ve never been here. I’ve never been to the White House. Nobody’s ever cared what I thought.”

So Trump had another successful meeting today with another segment of the United States economy that’s found itself suffering under the eight years of the Obama administration. They come out of the meeting with Trump and they’re just happy as they can be, as it seems like everybody who meets with him is. Prime minister of Japan, Netanyahu, the list goes on.

I’m just gonna cut to the chase here and then take a break. I’m gonna backtrack to the details that I have assembled for my effort to explain to you what’s going on with this Michael Flynn and the deep-state embedded coup that is taking place.

RUSH: Okay. Couple of bites here from the just-concluded press conference. You know, I’ve detected a pattern here. You have a joint press conference with Trump and a world leader, and they get it done in 20 minutes. They make their joint statement, their separate statements, and then there are four questions. Trump got two questions and Netanyahu got two questions from his press contingent. When it’s over Trump walks out and that’s it. And not one question from the New York Times, CBS, or NBC. That I saw, anyway.

We have a couple of bites.

The first question was from Christian Broadcasting Network, correspondent David Brody. Oh, you know how that’s gonna tick ’em off. I mean, the Drive-Bys are ticked off he’s in the room in the first place. “A Christian broadcast guy? Come on, Trump! What are you doing to us here?” His question of this: “Both of you have criticized the Iran nuclear deal, and at times you’ve even called for its repeal. I’m wondering if you’re concerned at all as it relates to not just the national security adviser, Michael Flynn, but also some of those events that have been going on with the communication to Russia, if that’s gonna hamper this deal at all, and whether or not it’ll keep Iran from becoming a nuclear state. And on the settlement issue, are you two on the same page?”

THE PRESIDENT: General Flynn is a wonderful man. I think he’s been treated very, very unfairly by the media — as I call it, “the Fake Media,” in many cases — and I think it’s really a sad thing that he was treated so badly. I think, in addition to that, from intelligence, papers are being leaked, things are being leaked. It’s criminal action, criminal act, and it’s been going on for a long time before me. But now it’s really going on, and people are trying to cover up for a terrible loss that the Democrats had under Hillary Clinton. I think it’s very, very unfair what’s happened to General Flynn, the way he was treated, and the documents and papers that were illegally — I stress that: illegally — leaked.

RUSH: Then why did you ask him to leave? You know, I’ve got a problem with this. I have to tell you, folks. Wth all of this praise for Flynn, why did he go? If the media’s mistreating Flynn, then why did he go? There’s more here, obviously, and I, El Rushbo, will be able to ‘splain it to you. Next question was… Actually it’s an exchange between Trump and Netanyahu. 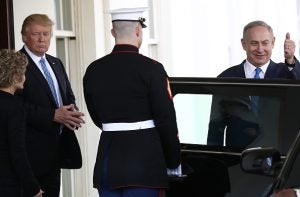 THE PRESIDENT: As far as settlements, I’d like to see you hold back on settlements for a little bit. We’ll work something out. But I would like to see a deal be made. I think a deal will be made. But Bibi and I have known each other a long time. A smart man, great negotiator. And I think we’re gonna make a deal. It might be a bigger and better deal than people in this room even understand. That’s a possibility. So let’s see what we do.

THE PRESIDENT: Doesn’t sound too optimistic but that’s…

THE PRESIDENT: Like I say, he’s a good negotiator.

NETANYAHU: (chuckling) That’s The Art of the Deal.

RUSH: (laughing) The Art of the Deal. So they obviously get along quite well, and we haven’t seen this in eight years. Our number one ally in the Middle East and we’re getting along with ’em again, folks. We actually got mutual respect instead of having a spoiled little kid president who thinks Israel along with the United States represents the problem in the Middle East. Nice to see this change.