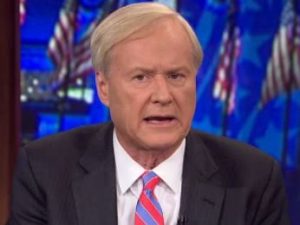 And then Matthews said, “It’s almost like the Romanovs.” Why don’t you just go all the way, Chris, and just say the Borgias? Just clear the decks and say just like the Borgias, Rodrigo Borgia, the pope, and his daughter Lucrezia, could be the Ivanka character. Why don’t you just go all the way? Why stop at the Romanovs? He said, “I mean, they bring all the family to these major state events. Why is Ivanka there, why is Melania there at a state press conference? He’s always bringing the family in, lording it over us. This sort of regal manner of the guy.”

Regal manner? I thought the guy was a reprobate. I thought he was a bull in a china shop. Now all of a sudden he’s a regal guy like a Romanov. What’s Melania doing in there? What’s Ivanka doing? She’s obviously selling her products. What else would she be doing in there, Chris? (laughing) Just jam it in a little further. Why would they not be there? When Trump had the ceremony to announce the choice of Judge Gorsuch, there were family members there and the press blew up at that. “Why is his family in there? What’s the family doing there? Why would a family member get a front-row seat to a judge being nominated? Why?” 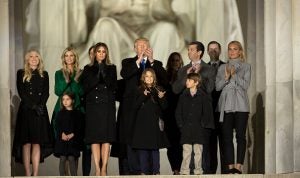 It’s as though tight-knit families offend the Democrats. Children who admire their father and want to work with him, that’s not normal. For Democrats, what is normal, then? I just love it. I just love the way they get so irritated. One thing about a family, they’re not gonna leak. And if they do leak, you can do something about it, because it’s family.

RUSH: I wanted to answer these questions that Chris Matthews had. (impression) “Why was Trump’s family up there? Who do they think they are, the Romanovs? (stammering) Wuh wuh wuh wuh wuh wuh wuh wuh what’s this family togetherness business?” Poor Melania. You know, she can’t win.

I don’t know if you’re aware of this, but last week the media were in an uproar sneering that Melania ditched the Japanese prime minister’s wife in Washington — which was not true — and that she was ridiculously shirking her first lady duties by not being in Washington at the White House. There were those stories out there that Melania… And then there were accompanying stories, “Is there trouble in paradise? Does Melania want no part of what her husband is doing? Does Melania know her husband is a phony? Does Melania know her husband’s a fake and a fraud?

“Does Melania know this isn’t gonna last? Does Melania know that there’s no reason to be in Washington because Trump’s not gonna be there himself in a couple of months?” All this stuff’s out there. And then the next pictures I saw were Melania Trump and Mrs. Japanese Prime Minister walking around the Japanese garden somewhere. (impression) That’s right, down in Delray Beach, and they were feeding the koi fish and they were throwing things in the air for the insects to grab, whatever they were doing — looking at flowers and stuff — what first ladies do going through a garden.

“Awwww, isn’t that lovely?” “Yes, it’s such a wonderful aroma. Can we if I can some?” “No, the cameras are on us.” Whatever goes on in these gardens is what goes on. But I was under the impression that Melania was shirking her duties and there she is with Mrs. Japanese First Lady, and then there she was at dinner with her husband, the president, and Mrs. Japanese First Lady and the Japanese prime minister and owner of the New England Patriots. Chris Ruddy was at that dinner. He’s very, very tight with Trump.

(sigh) So what I’m hearing about Mrs. Trump isn’t true, from what I see. 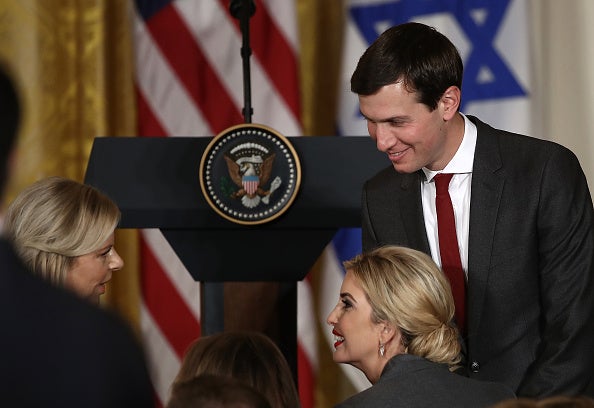 Ivanka’s husband’s a guy named Jared Kushner, and he’s Trump’s number one adviser on Israel. And Ivanka is Trump’s number one adviser on fashion. I’m just kidding. I’m just making a joke. Do you believe that they…? (interruption) No. (interruption) Oh, yeah, yeah. But the New York Times, that was Carl Bernstein’s son. Carl Bernstein’s son admitted to being the one that called Melania a hooker. But he did it at a party. He did it at a social gathering, not an official news function. Anyway, Times reprimanded him, “Because, if you’re gonna say that, say it in the paper, not at a party.”

(interruption) No, they didn’t reprimand him for that, but I wouldn’t have been surprised if they had. But they did reprimand him. So he came out and admitted it and so forth. And then there’s the Office of Government Ethics has recommended a full-fledged investigation and admonishment of Kellyanne Conway for urging people to go out there and buy Ivanka products while standing in the White House with the White House logo behind her.

They say it’s a clear violation of ethics, that no government official shall endorse, suggest, or recommend any product. And Kellyanne clearly did. In fact, she even said, “I’m gonna do a little commercial here for Ivanka.” Now, that’s all true. That’s not kosher. But I want to put some of this in perspective for you, folks. The left loves to say that what their protesters engage in is, “Simple dissent! Time-honored, wonderful American dissent. Why, our people are engaged in the very behavior that led to the founding of America: Time-honored dissent from authority.”

And that’s not what happened. I will guarantee you what happened was not normal day-to-day dissent or business. You have a bunch of left-wing bullies, I will guarantee you, that were intimidating and accusing and threatening Nordstrom that if they didn’t get rid of Ivanka’s stuff, that all kinds of hell was gonna happen to them. There’s no doubt in my mind. And that’s not business.

Now, let me ask you. When something like that happens, let’s take Ivanka out of this and put you into it. I want every one of you to imagine that you’re an entrepreneur and you have created a product of some kind. You’ve invented it, and you’ve found a way to mass produce it, you’ve marketed it, and it is in various stores, maybe in a chain of stores, whatever you imagine, and it’s going great guns. And then somebody finds out that you happen to be a conservative or a Republican.

And then all of a sudden all those stores selling your product are suddenly inundated with tweets and emails from people threatening to never set foot in this store again, never buy anything in the store until your product is removed. And then you dig deep and you find out that 99% of the tweets and 99% of the emails are being sent by people who don’t shop at the store anyway and don’t even live in the town where the store is.

But yet the company gets intimidated, gets nervous, gets scared, and they tell you, “We’ve got to stop selling your product because we’re being threatened, and we don’t want to put up with it.” Are you’re just supposed to sit there and say, “Well, time-honored American dissent is destroying my business. And if I respond in any way, I’m being unethical.” ‘Cause that’s exactly what’s going on. 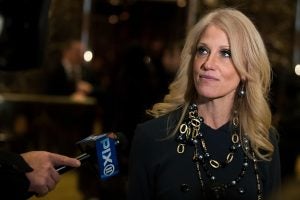 Now, maybe Kellyanne Conway should not have said from the White House “buy Ivanka products,” but my point is this. What they did was engage politics for politics, because I am here to tell you, I don’t know, I’m using intelligence guided by my own experience, and I’m just telling you that the odds are Nordstrom got rid of Ivanka’s stuff because of politics, one way or the other, political pressure or maybe management at Nordstrom didn’t want it, whatever it is.

And I think it’s not right that the left gets to inject their politics into business, and it’s still called business. When the right then tries to respond and inject their politics, and the right can’t because you’re not allowed to infuse politics with business, but the left gets away with doing it. So what are people supposed to do? Just let the left have total control over what’s sold where and what isn’t sold where?

So I know what Kellyanne was doing. She’s simply defending Ivanka, who happens to be the daughter of her boss, against a totally unwarranted, not-business-related political attack. And because she did it with the White House logo, the pressroom, it does convey an endorsement by the government, which government ethics laws do not allow.

Now, OGE, the Office of Government Ethics, they don’t have any power to accuse, to charge, and to try anybody, so all they can do is point out so-and-so violated ethics rule. It’s up to others to then take action on it, in this case it would probably be Congress. I don’t know who. Federal Trade Commission, I have no idea. I don’t know what’s gonna come of it, but that’s what I think happened.

And when it happens to you, it totally changes the perspective of things. As a conservative you’re just supposed to sit there, “Well, that’s just the breaks of the game.” The left gets to infect and corrupt business all day long and it’s called great American dissent. And if you respond to it, you’re being unethical. Just another way that the playing field is in no way level.