RUSH: Now, back to this CEO meeting that Trump had today. It seems like this is what’s reported after every meeting that Trump has with businesspeople. Today it was CEOs. CEO statements after this meeting with Trump… The stock market’s up 39 points and climbing, it’s at 20,815 right now. It’s continuing to balloon up, and I think the CEO statements after coming out of the meeting with Trump are one of the reasons. 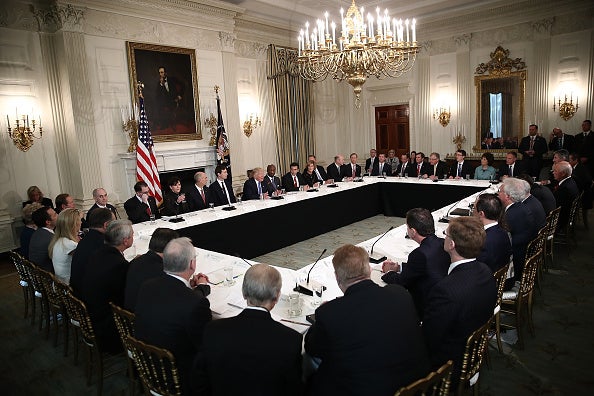 The CEO of Alltech said that it was the best and the most uplifting meeting he had ever been in! Now, I must be honest, folks. We always try to keep things in perspective here. You know, Obama had these kind of things early on, and I remember getting mad when people would come out — conservatives, people you think are conservative or at least small-government-oriented businesspeople come out — and start singing the praises. I had to stop myself and say, “Look, they can’t do anything else.

“They’ve got to come out and praise the guy, if the know what’s good for ’em. They have to, whether they mean it or not.” Well, is some of that true here? Do some of these CEOs have to come out and praise Trump or else? Not because he’s telling them these better or else. Is it just what they calculate they have to do? So I’m asking myself, “How much of it’s real and how much of it is for show?” But when the Alltech guy says it was the best and most uplifting meeting he had ever been in, you don’t have to say that.

You can come out and say (impression), “It was a very productive meeting. I very much enjoyed getting to know the president. He and I the same page on many, many issues.” But this was over the top. And then the CEO of Dow Chemical — they’re in 160 countries — Andrew Liveris, said that Trump is very forward looking, has the ability to forget who was with him and against him and just move everybody forward. He said in this meeting, Trump didn’t have any animus for anybody.

It didn’t matter whether anybody in the room was for him or against him. It was all eyes forward. He called it very instructive. He said the whole thing was very engaging, said Trump was very engaged in the meeting and very open to new ideas and very involved, very hands-on. And I’m gonna tell repeat what I said in the first hour. I think we’re back to a normalcy in this country. For the last eight years there was no relationship to the state of the economy and presidential approval ratings.

And I remember being so frustrated, ’cause the economy’s tanking and we’re losing jobs left and right and Obamacare comes along and people can’t afford it and Obama’s approval numbers stay in the high fifties, mid-fifties, high fifties. The economy’s plummeting. There aren’t any jobs. Jobs are being converted from full time to part time. And I had to stop and remember why. The racial component just… I think it… It made many results of polls official.

Conversely, if the economy doesn’t take off — if it remains focused on Wall Street but doesn’t now bleed over to Main Street — and if these jobs that are being promised here by all these CEOs don’t materialize, if the economy doesn’t grow, Trump’s numbers are gonna suffer accordingly, whereas Obama’s never did. But I think we’re back to that state of normalcy now. But the Dow Chemical CEO came out and said we clearly have the opportunity to have our GDP grow at greater than 2%.

Obama never even got there. I think maybe a couple of quarters we had 2% economic growth. One thing I know, Obama, the last eight years our economy never grew at a 3% rate, and the average was just over 1%. And the Dow Chemical CEO come out and said we have the opportunity for it to grow more than 2% now, and I think it’s perfectly realistic. We should have economic growth at 4%. We should unleash enough things that this economy becomes unstoppable. Our economy has been artificially… It has been suppressed the last eight years.

Our economy has suffered like much of the rest of America has along with Obamaism! Obama attempting to transform America and identifying the things “wrong” with it, which, in his view, were many. Our country was in a state of turmoil and unrest, and you can’t have the Obama economic policies combined with tax policies combined with Obamacare and a growing economy. You can’t have the government come in and just take over one-sixth of the economy.

Governments don’t grow anything. Governments don’t create wealth. They just take it. And when they take one-sixth of the U.S. economy and appropriate it for their own use, as they did with health care, economic growth becomes problematic. I think we’ve got pent-up growth waiting to explode in this country. And if it does, the Democrats can raise hell about all they want, and it isn’t gonna matter, because the one thing that everybody’s…

After eight years of Obama, people are gonna figure out either the Democrats don’t know how to make the economy grow or don’t want to. Because this is gonna be one stark comparison, if Trump is able to unleash this economy. How do you do that, by the way? You turn loose the American people. People are the U.S. economy. Enterprise is the U.S. economy. Ambition, desire, objectives, pursuit of excellence. That’s the U.S. economy. Commerce.

You turn people loose pursuing their own self-interests and you take some of the “protections” away from them (chuckling) — take some of the regulations go away — and you light a fire under beneath them, and hell’s bells! This nation is just waiting to explode with economic growth. And if it does, a side-by-side comparison of that with the eight years of Obama? It’s gonna be crystal clear, once again, that you don’t get economic growth and rising wages and increased economic opportunity and economic freedom — you don’t get any of that — when Democrats are running Washington.

Literally, you don’t get very much. Certain people do. The donors to the Democrats make out okay; the vast majority of country doesn’t. So there are many upsides here, folks.