RUSH: Okay. The scheduled protests are underway in Hamburg. Now, you may not be told this. These protests, they are ostensibly tied to the G20, the Group of 20. The supposed 20 economic powers on the globe are having one of their occasionally frequent summits here where they get together for photo-ops and dinner and this kind of stuff, and they’re always protested. I don’t care whether it’s anarchists or who it is. They are bought and paid for, and they show up, and the riot police come out, and they water-cannon these people. It’s as predictable as the sun coming up in the morning.

What you might not be told is these protests are taking place miles away from where the world leaders are. The world leaders never even see this stuff. It is strictly a television protest. It is for television, it is by television, and it is among television. The purpose of this is to feed television news organizations with a false narrative. In this case, the false narrative is that the people of the world have gathered in Hamburg to protest Donald Trump because Donald Trump worked with Vladimir Putin to steal the United States election, and the people of the world wanted Hillary Clinton to be president.

They also hate the United States because we’re not socialist yet, and so the purpose of these protests is to provide ammunition for worldwide media to criticize everything about America they don’t like. In this case from Donald Trump down to Trump policies to economic policies to anti-gay policies, to climate change, you name it. That’s why these people are bought and paid. They’re paid to show up. They don’t know why they’re there. Most of them are not there organically. In fact, this little tidbit of news comes to us from the Need to Know Network. Apparently, it’s CNN. “Angela Merkel…” 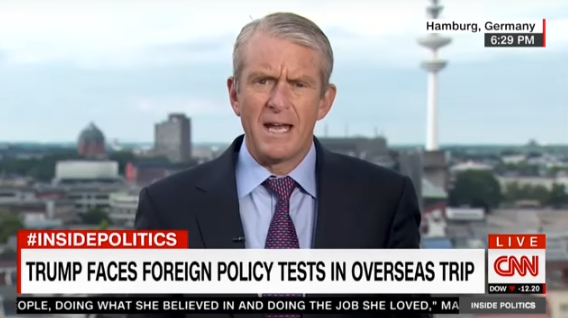 Well, the story is that CNN’s international reporter said that the protests… This thing is written so bad. Instead of reading this tripe, let me tell you what happened. Merkel scheduled the G20 for Hamburg to make it easier for protesters to get there. That’s the upshot of it. Merkel is holding the G20 summit in Hamburg so that Germans can protest Trump. That’s what Merkel wants this to appear as, and our old buddy CNN International diplomatic editor Nic Robertson… Remember him from the…? Well, he was in Egypt during the overthrow of Mubarak and the beginning of the Arab Spring.

Some of our all-time favorite audio sound bites are of Nic Robertson. Anyway, he reported that German chancellor Angela Merkel is holding the G20 summit in Hamburg so that German protesters can get close enough to voice their displeasure with Donald Trump. Nic Robertson reported, quote, “Angela Merkel has chosen to hold the summit in an environment, in a location that can be surrounded by protesters.” Well, that’s not it. These protesters nowhere near where the G20 is taking place. They’re miles away from it, at least two miles away.

Not even Merkel could arrange it so the protesters could arrange right outside wherever the G20 meeting is taking place, and Nic Robertson at CNN was ecstatic. CNN’s excited. They think Merkel hates Trump so they love Merkel, and so Merkel scheduling this so that protesters could get close to Trump. So this is totally fake news. I mean, the protesters are protesting, but I’m telling you, folks, it’s by rote. Wherever the G20 is, wherever the G8 is, wherever the World Trade Council. Anywhere there is a globalist meeting, these people show up — and they don’t know why.

They don’t know what their protesting against. They don’t know what they’re asking for. If they got it, they wouldn’t know they got it. We’ve got the riot cops, and they’re using water cannons and any number of things. It’s what we were just talking about, the tradition of things. This is just part of the mosaic, and it’s all for television. It is all so that television media (predominantly left wing) around the world with create phony narratives and fake news that genuinely is anti-American, anti-American president. There are rare times where this is not the case.

So it’s just as predictable as anything else in media has become, and the media being sympathetic with the protesters is part and parcel of the deal.

RUSH: There’s another sideshow here, and that is the G20. There is an effort — I’m not kidding you — there’s an effort among leaders of the G20 to embarrass Trump over his pulling out of the Paris Accord. There is an effort for there to be a public vote, and the desire is that 19 of the 20 countries vote to stay in it and condemn Trump for pulling out.

However, there is a problem. The New York Times is crestfallen. The headline: “Trump May Find Some Allies on Climate Change at G-20 Meeting — Western European efforts to isolate President Trump for rejecting the Paris climate change agreement appear to be faltering as leaders gather for a summit meeting in Hamburg, Germany.”

So another fake news media narrative is going down in flames, it appears.

“In announcing last month that the United States would withdraw from the Paris agreement, the president portrayed the pact signed by 194 nations to cut planet-warming emissions as a bad deal for America.

“The German chancellor, Angela Merkel, has cast the agenda of the Group of 20 summit meeting as a stark contrast to Mr. Trump’s America First approach, particularly on climate change. She has called the Paris accord ‘irreversible,’ and diplomats have expressed hope that the 19 other countries would make it clear that their support is unwavering. Environmental activists, hoping to highlight America’s status as an outlier, also are pushing hard for a united front against Mr. Trump.”

But now the crestfallen Times reports that: “In recent days, however, those aiming to isolate the United States on climate issues have softened their language to say they hope an ‘overwhelming majority’ embrace the Paris agreement.” They know they don’t have 19 votes. Saudi Arabia has indicated it is not going to climb on board with this. Russia, Turkey and Indonesia are sending mixed signals about how they will not support the G20 opposing Trump.

And the crestfallen quote from one of the organizers, Dennis Snower, “It doesn’t look good. It does not look like we are going to have 19 countries and the United States against.” And another wet dream of the American left fades.