RUSH: By the way, did you hear what Trump said that everybody’s talking about at the G20 meeting? Oh, this is great! Trump tweeted out Friday morning, this morning from the group of 20 summit in Germany, and he said, “Everybody here is talking about how Democrats handled the hacking related to last year’s presidential election.” He said, quote, “Everyone here’s talking about why John Podesta refused to give the DNC server to the FBI and the CIA. Disgraceful!” So here the G20 guys are meeting, and what’s her name, Merkel… I didn’t mean to say “guys” exclusively.

They’re gathering and they’re talking, and Trump tweets that everybody’s talking about Podesta not letting investigative agencies look at the DNC server! And Podesta took the bait. Podesta responded (pararphrased), “Get real, Trump! Get a grip.” I mean (laughing), it’s just fabulous. “Everybody here is talking about how…” He gets it out in the news again that the Democrats will not let the FBI or the CIA look at their computer. That probably was the one thing hacked during the election!

RUSH: Now, Trump tweeted earlier today that everybody here at the G20 is talking about why Podesta refused to give the DNC server to the FBI and the CIA. (laughing) Here you have the 20 largest economies of the world meeting in a summit.

And Trump tweets that all anybody’s talking about is Podesta refusing to let the FBI look at the DNC computer! (laughing) So we have a story here from the New York Post today. Peter Schweizer is back: “Uncovering the Russia Ties of Hillary’s Campaign Chief,” and this is an in-depth story and it’s actually an expose the guy who does have ties with Russia, and that’s John Podesta, Hillary’s campaign manager. Schweizer was on… I think he’s been on Fox, maybe Fox Business Channel. He’s been talking about this, and here’s some pull on quotes from the story. It’s an op-ed that Schweizer wrote. 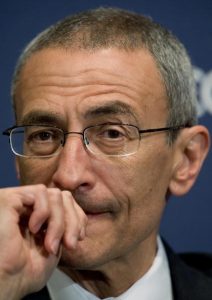 “In short, Clinton’s top campaign chief and a senior counselor to Obama,” that’s Podesta, “sat on [a company named] Joule’s board alongside top Russian officials as Putin’s Kremlin-backed investment fund funneled $35 million into Joule.” The bottom line here is that Podesta was an investor and director of a company into which an investment fund run by Putin invested $35 million. So the Russians put $35 million into a company that Podesta worked for and worked with. “No one looking at the Podesta fact pattern can claim to care about rooting out Russian collusion and not rigorously investigate the tangle of relationships.”

If you’re gonna talk about collusion — Russian collusion, Trump, whatever — you have to look at real collusion between Russia and Podesta. Schweizer says, “Are U.S. officials investigating the matter? We don’t know. When Bartiromo asked Podesta whether his closed-door session in front of the House Intelligence Committee included questions about his Russian ties and Joule, Podesta punted: ‘I have already told you that I was asked not to talk about specific questions, and I said I would respect that.'”

Podesta has testified before the house Intel Committee. What people are wondering now is if the independent counsel, special counsel, Mueller, is looking. Or whether anybody is. Is the FBI, was Comey, because this is undeniable. I mean, Podesta was up to his ears — the board of directors! Alongside top Russian officials, Russian officials are the on board, Podesta was on the board, and Putin has an investment fund that put $35 million into the company on which Podesta sat on the board.

“After the slippery answers Podesta delivered during his explosive Fox Business interview, U.S. officials have more reasons than ever to demand answers about John Podesta, Joule Unlimited and Putin’s Rusnano investment fund. If they weren’t investigating Podesta before, they should be now,” according to Peter Schweizer.

This is not a new story. It has long been known that Podesta sat on the board of this company and that Russians have board seats and that Putin was investing in this company on which Podesta sat on the board. It would be a delicious irony, ladies and gentlemen, if at the end of all of this what actually is uncovered is Russian collusion with a campaign manager, Hillary Clinton.