Reagan’s 1982 Speech on Facing Down Threats to Western Civilization

RUSH: I want to go back to the Ronald Reagan speech in 1982. We’re bouncing off Trump’s speech in Poland yesterday in which Trump pledged the Poles that the United States would not forsake them. America would be there to help them with their growth, their protection, their energy supplies. 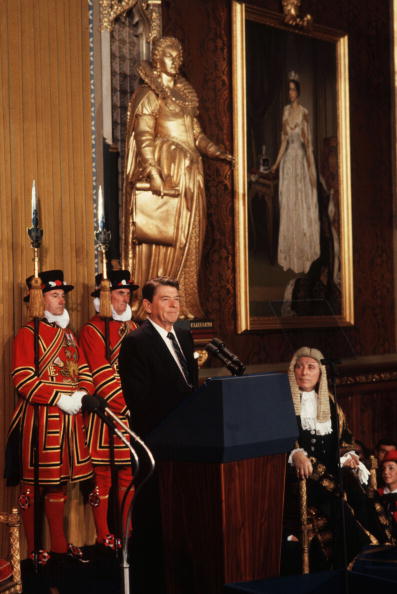 Right now most of Europe gets its natural gas and a lot of its oil from Russia, with pipelines that run through a number of different European Union countries. This allows Russia to have much leverage over the European Union. Because if he wants, Putin can simply close the pipeline. Putin can cause energy shutdowns, particularly with natural gas, throughout much of Western Europe.

And Trump was promising the poles that we would begin to supply them with various forms of energy and they could count on and depend on us because they were big supporters of Western civilization, Western culture, and the United States of America.

I thought it was a fascinating speech, and it reminded me of a speech that Reagan had given in London in 1982 at Westminster Palace. We have some bites from this speech. And look, it’s not word-for-word similar, and there’s not been a Reagan since Reagan, and I’m not saying that Trump is Reagan by any stretch.

But I’m trying to draw an analogy here to the ideological inclinations and the ideas and the devotion to Western civilization, Western culture, distinct American culture. I said yesterday that Trump was the first president to actually talk about it in those terms since Reagan. George W. Bush was great on the belief that America was the solution to the world’s problems, not the problem, and was a great defender, believer.

I don’t mean to slight George W. Bush in any way, shape, manner, or form, but actually talking about Western culture, Western civilization, which is under assault from within our own borders, I just wanted you to hear the Reagan version of this from all the way back in 1982.

REAGAN: Poland is at the center of European civilization. It has contributed mightily to that civilization. It is doing so today by being magnificently unreconciled to oppression. Poland’s struggle to be Poland and to secure the basic rights we often take for granted, demonstrates why we dare not take those rights for granted. We’re approaching the end of a bloody century plagued by a terrible political invention, totalitarianism. Optimism comes less easily today, not because democracy is less vigorous, but because democracy’s enemies have refined their instruments of repression.

RUSH: And here is where Reagan assured the world that Western values would triumph, which is what Trump did in Poland yesterday.

REAGAN: Yet optimism is in order, because day by day democracy is proving itself to be a not-at-all-fragile flower. From Stettin on the Baltic to Varna on the Black Sea, the regimes planted by totalitarianism have had more than 30 years to establish their legitimacy. But none — not one regime — has yet been able to risk free elections. Regimes planted by bayonets do not take root.

RUSH: And again, this was all focused on Poland and this is Lech Walesa, this is Poland’s refusal to come under the umbrella of Soviet totalitarianism. And he was praising their bravery and pointing out that all of these totalitarian states could never risk election because the leaders would have no prayer of winning if the people had a chance to actually vote on them. And like Trump yesterday, Trump did not sugarcoat any threats. 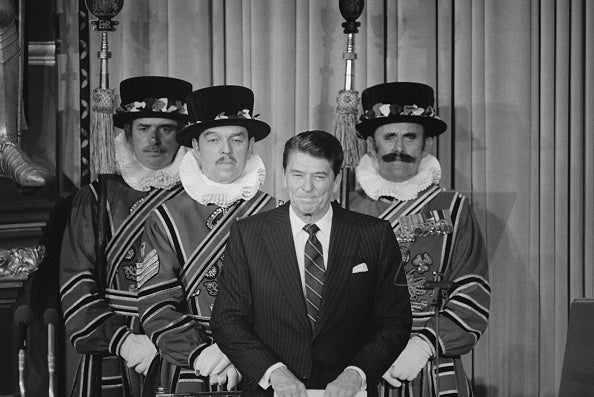 REAGAN: We have not inherited an easy world. If developments like the Industrial revolution, which began here in England, and the gifts of science and technology have made life much easier for us, they have also made it more dangerous. There are threats now to our freedom, indeed to our very existence, that other generations could never even have imagined. There is first the threat of global war. No president, no Congress, no prime minister, no parliament can spend a day entirely free of this threat. If history teaches anything, it teaches self-delusion in the face of unpleasant facts is folly.

RUSH: Trump said something yesterday, too, about Western civilization, Western culture. He sang its praises. He said it was the greatest culture in the world. But he asked if we still today have the courage to defend it. Do we have the will to defend our values? Are our values important enough to us that we will defend them? And here is Reagan saying essentially the same thing in different words.

REAGAN: I’ve often wondered about the shyness of some of us in the West about standing for these ideals that have done so much to ease the plight of man and the hardships of our imperfect world. Let us be shy no longer. Let us go to our strength. Let us offer hope. Let us tell the world that a new age is not only possible, but probable.

And I think it’s been the case throughout our nation’s history. Will the younger generation ride to the challenge if necessary? Will they be there? Have they been taught the values? Do they revere them? Do they respect them and revere them enough to defend them?

And I know that today people are asking that about Millennials just like when I was in my twenties and thirties. Baby Boomer parents were asking that about their own kids. It’s something that is universal. And you don’t know until the test comes. That’s why it’s important to keep asking that question because it focuses attention on it.