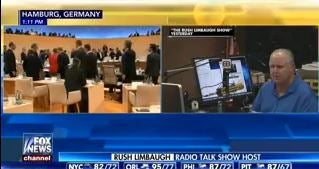 DOOCY: It would be good if we could split the screen right now. Rush Limbaugh had an unbelievable assessment of the Trump speech, and it was like nothing he’d heard in a very long time. He said it was very Reaganesque. So if we could watch a little of these pictures and watch and listen to Rush from yesterday, this is gonna sum it up. Here’s Rush…

RUSH: So they wanted to split screen me saying what I said and they wanted on the other half of the screen some pictures that they had chosen to go with this, and this is me analyzing Trump’s speech yesterday in part plus some other things.

RUSH ARCHIVE: …Western civilization, Western values, American culture. This distinct American culture that resulted from our founding that is now under assault, not just from enemies around the world, but from enemies within. That distinctive American culture which has given freedom its greatest repository and chance in the world is under assault from the American media and its agents in the Democrat Party and in academia and in Hollywood. The threat to American Western civilization is now primarily domestic, and it has to be beaten back if we are to survive. It’s a battle to the death, folks, and we’re smack-dab in the middle of it. And Trump’s the only president since Reagan to acknowledge it.

KILMEADE: That’s Rush going to break. But right now you’re witnessing they’re going to have a working lunch together.

RUSH: Right. So I want to thank Doocy for noticing that yesterday and deciding to replay it on Fox this morning. We went back and we got some speeches from Reagan when he was in a similar circumstance as Trump. These Reagan speeches are in 1982 at the Palace of Westminster in London, in which he talked about Poland and the Polish struggle to be Poland and independent from the Soviet sphere. And he talked about Western civilization and Western culture, and it was striking because — and I remembered this. The similarities between the Reagan speech in ’82 and Trump yesterday are striking.