Democrat Lies, Left-Wing Hate and Moderate Republicans Stand in the Way of Repealing the Obamacare Disaster

RUSH: The Senate has just postponed its August recess until the third week in August. Meaning they’re gonna stay in Washington for the first two weeks of August in an effort to get health care done. The Obamacare repeal and replace, get it done. Some were thinking they would work throughout the August recess, but they’re gonna work two weeks. I guess that’s what they mean when they postponed it on the recess until the third week.

So the recess is gonna start in the third week, which means they’re gonna work the first two weeks. Is that right? Well, these people, you never know in government language what that actually means, but that’s what we’re going to assume is the case. So we’ll just have to watch this. (interruption) Yeah, the recess will start the third week of — you know, that’s gonna be right in the middle of the NFL preseason. Not that that has anything to do with it.

Bernie Sanders. If you haven’t heard this, this is going to blow your mind. These people have no shame. Remember, now, their rhetoric, particularly Bernie, Bernie’s rhetoric had one of his dyed-in-the-wool supporters arm up and go try to assassinate a bunch of Republicans. Republican health care is going to kill millions of Americans. Bernie Sanders, this is Sunday in Morgantown, West Virginia, at a Care Not Cuts rally. Listen to this.

SANDERS: What experts at the Harvard School of Public Health estimate is that if 23 million Americans were to be thrown off the insurance they currently have, which is what the House bill would do, up to 28,000 Americans every single year could die. That is nine times more than the tragic losses we suffered on 9/11 every single year.

RUSH: Every single year. So Bernie Sanders here, this affable, nice, congenial old man, just loved and adored by Democrat Millennials and young people, essentially said that Republican health care plans will kill nine times the number of people that died on 9/11 every year. Twenty-eight thousand Americans every single year could die. Well, that’s one way of getting rid of the Democrats, I suppose.

Let me ask you a question. Is everybody in America insured today? Did Obamacare magically insure every American? No. The answer is no. So why aren’t the uninsured dying the past eight years? Obama’s in office 2009, 2010, it’s two years before they pass Obamacare. There were a lot of uninsured those two years. Why didn’t they die? Then Obamacare comes along, we’ve got Obamacare passed, signed into law 2010. And 2010 the next six years, not every American was covered. Why didn’t thousands die every year?

But, I mean, to even entertain this intellectually as though Senator Sanders has put something on the table that’s worth discussion is absurd. You want talk about hate speech? You want to talk about rabble-rousing? These same people sit there every day and they complain, they whine, they moan about what’s said on talk radio. And I’m telling you, we’re not even in their league. We can’t hold a candle to the hate speech and the fearmongering and the hate that these people harbor. 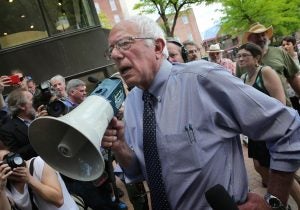 This affects me the same way those of you fed up with the Trump stuff are saying it affects you. This is common. This is the way the Democrats have been speaking for 30 years. Republicans want to starve children. Republicans want to kill Granny. Republicans gonna push your grandmother over the cliff in her wheelchair just so they don’t have to provide health care.

In the meantime, it’s the Democrat Party that’s all for health rationing where people will die, where the government will decide whether or not their lives are worth saving or being treated, it’s the Democrats who support that. Twenty-eight thousand people a year. Susan Collins, Republican from Maine, yesterday on Capitol Hill speaking with reporters about the Republican health care bill.

COLLINS: I do need a complete overhaul in order to get to “yes.” My hope is that we can avoid the mistake that President Obama made when he passed a major health care reform bill, the Affordable Care Act without a single Republican vote. I don’t want to see us make the same mistake and pass an overhaul of the law without a single Democratic vote.

RUSH: Oh, that’s so wonderful. It’s just so inclusive, and it’s so pragmatic, and it’s got so much attention to diversity. She doesn’t want to pass a law that doesn’t have at least a Democrat vote. What does that tell us? It tells us that Senator Collins does not regard the Democrats as a party to be defeated. Now, she may not be aware of it, but that’s why the Republicans were given control of the Senate. That’s why the Republicans were given control of the House. That is why a Republican, Donald Trump, won the White House, is to defeat and to stop Democrats and the Obama legacy, not to incorporate it, not to accommodate it.

Now, I understand she’s a moderate, and I understand she’s right there in the center, and I understand that she shudders and shivers at the very sign of partisanship. But herein lies one of the obstacles we face, and that is that we simply do not have a killer instinct. And I’m talking about within the political realm. Do you think they cared whether or not there was a Republican vote? They didn’t give a rat’s rear end. In fact, I think they were proud they got it done without any Republican support.

But here we are focused on bipartisanship. Yes, we must show that we can be bipartisan and that we can work and cross the aisle and that we can craft legislation that will appeal to all. And we continue to squander our opportunity. So whatever happens here, we just found out that Susan Collins is not gonna vote for anything that will actually mean something. Because I guarantee you if you have to modify this to get some Democrat votes, I mean, those people are wacko lunatic leftists.

If you have to modify what you’re doing to get one or two of them to support it, you’re not repealing and replacing Obamacare, because they won’t settle for anything of any type. There’s not a Democrat in that Senate that go along with any aspect of repealing and replacing Obamacare. I don’t even think Joe Manchin. I could be wrong about Manchin maybe, but in this case I don’t think so.

Here’s somebody named Jeff Merkley. Jeff Merkley is a senator from Oregon. Did you hear what they’re doing in Oregon? They want to decriminalize heroin, marijuana, and I think crystal meth. They want to decriminalize it in what they say are small amounts. Don’t be surprised. That’s where the left is headed with everything else as they attempt to corrupt and totally overthrow the American culture.

This guy, Senator Merkley, was on CNN’s New Day today talking with Alisyn Camerota who said, “What’s gonna happen here, Senator? Because, you know, the president’s pushing Republicans to get this done before the August recess. There are 10 Republicans currently who say ‘no’ to what’s on the table, but it sounds like Mitch McConnell’s still at it and that they’re still trying to cobble something together. What do you see happening this week?”

MERKLEY: I see Senator Cruz saying, in order to support this bill, that he’s got to have his amendment, which completely dismantles the ability to have common pricing and protection against preexisting conditions. That bill would eviscerate the essential benefits philosophy where a health care policy is actually a policy that covers something. You know, the president has criticized almost every single day fake news. But what we have in the Cruz amendment is a pathway to fake insurance.

But you hear him talking about the essential benefits. There are three mandates currently in Obamacare. There’s the personal mandate, you have to buy it, the employer mandate, they have to provide it. And then the Title I mandate, Title I being the title of the actual statute, the Affordable Care Act. And it is in Title I that we have the essential health benefits. These are the mandates that Obama added to this thing, and they include such things as everybody being forced to buy maternity coverage, everybody being forced from Catholic Church to purchase insurance policies for abortions and so forth. And we obviously want to get rid of those because they’re mandates, they’re contraindicative.

I mean, why force a 75-year-old couple to have insurance for pregnancy? Why? Why make them buy it? But that’s what Obamacare does in order to raise revenue to pay for other aspects of the bill. And the Cruz plan and a number of Republicans want to get rid of those, and that’s what the Democrats won’t go along with, and even some Republicans. Some Republicans are reluctant to support eliminating Obama’s essential health benefits, otherwise known as the Title I mandates.

Here is Cruz. He was on Hannity last night. “Senator, I’m listening to McCain and McConnell basically throwing up their arms, almost sound like they’re caving in. What’s happening here?”

CRUZ: I continue to believe we can get this done. And we have to get it done. For seven years, Republicans have promised the voters, “If you elect us the one thing we said is we’ll repeal Obamacare.” I think it’d be catastrophic if we fail to deliver on that promise. And so what I’m spending every waking moment doing right now is trying to bring together and unify Republicans. Trying to bring together conservatives and moderates and leadership and the administration, get everyone on the same page and say, “Let’s deliver on the promise.” And when it comes to Obamacare, the most important thing, the way we unify Republicans is let’s focus on lowering premiums. If we come together, enact common-sense reforms, more competition, more choices, more options and we lower premiums, that’s a win for everyone. That’s how we get this done.