I Think the Natalia Veselnitskaya Thing Is a Setup

RUSH: We have made a tiny little investment here in our Dittocam apparatus. We now have a little switcher. And I no longer have to look like an idiot holding up pictures in my hand zooming in with a hand-held remote control on our camera. We can actually switch this picture, I send a copy of it over to the broadcast engineer, and he loads it, and here it is.

This is the picture. Go ahead and make the switch. See that fade-in for those of you watching the Dittocam, did you notice that fade? Just a soft fade. It’s on her Facebook page. Now, wait a minute. For those of you watching on the Dittocam — this is an added treat now because no longer am I gonna have to hold things up. We can load things with the switcher and fade them in. 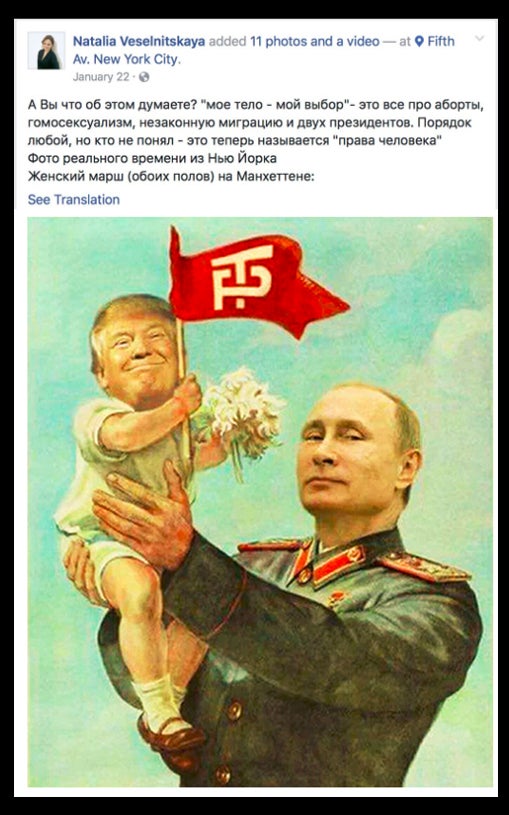 What you’re looking at here is a picture posted on January 21st, this is the day after Trump’s inauguration of the honey pot, “Natasha” Veselnitskaya. It’s a picture showing Vladimir Putin in Russian military uniform holding a baby with Trump’s head Photoshopped onto its body. Now, what this is, lest you think something else, this is a photo and a meme, if you will, that a bunch of leftists began to further the allegation that Putin colluded to secure Trump beating Hillary. And this is how they have chosen to illustrate it.

So what this means is that “Natasha” Veselnitskaya is among those on the left who believe that Putin colluded with Trump to secure the election for Trump and against Hillary. This is her way. I guess you could say, “Well, no, Rush. It doesn’t mean that. She simply put it up because she found it interesting.” No, no, no. When you look at all the other pictures on her Facebook page, they’re pictures of the anti-Trump rally in Chicago, the women’s rally, but this picture that you’re looking at here if you’re on the Dittocam, and you’ll see that RushLimbaugh.com on the website if you’re not a Dittocam user here, this is classic of the way the media and the left are attempting to illustrate that Trump didn’t legitimately win.

This is the woman who wanted to meet, did meet with Trump Jr. ostensibly to carry bad news about Hillary from the Russian government. Of course that’s not what she had. She wanted action on some piece of legislation that was important to her. I think the whole thing’s a setup. I think the whole thing was a misdirection play. But this picture makes it look like she is part of the opposition to Trump. Okay, fade it back to the host. I’ve not seen that particular picture, no, but I have seen other illustrations the left uses on Twitter and on Facebook, Instagram, to mock the idea that Trump didn’t legitimately win and that Putin is now pulling strings, is a puppet master, which is what they think.

RUSH: Okay. I’ve got panicked people now trying to tell me that some of these interpretations about “Natasha” are wrong. Now, I alluded to the possibility that these photos that she posted at the Women’s March in Chicago are photos that she found and that she wasn’t there, and the photo in McCain’s office… The guy standing next to McCain, by the way, is a lawyer. He’s a Russian lawyer very much anti-Putin. It’s being reported that she wasn’t in Chicago; she didn’t take the pictures there. She saw the pictures and, for whatever reason, wanted to post them.

I have people trying to tell me she is very pro-Trump now and that she was not in McCain’s office, that she saw the picture and liked it and posted it on Facebook. So I just… I’ve alluded to all of these possibilities. I have not stated one way or the other. Now, the picture that we just showed you of Putin holding up a baby with Trump’s head Photoshopped on it? We’re now told (paraphrased), “Yeah, she doesn’t like that. She posted that to show her disapproval of it. She’s very pro-Trump.” That’s according to a website called Heavy.com. (interruption) Have you heard of Heavy.com?

Do you know anything about them? (interruption) I don’t know anything about ’em, either. Anyway, the point is that this woman is not some obscure placeholder who was given a message and told to run to Donald Trump Jr. in New York with it. The woman is actively involved somehow, some way in things and needed a visa exception to even get in the country in June of 2016. Here’s George in Key Largo, Florida, as we head back to the phones. How you doing, George?

CALLER: Good, Rush. How are you?

CALLER: Okay. Look. I mean, with this email, it’s so obvious. I mean, just look at… I think you scooped me before, but every single talking point is there. So it’s almost like somebody sat this guy — Gugerstein (sic) or whatever his name is. They sat him down and said, “Listen, this is what we have to include in this email, and this email is the setup for the entire Russian collusion bit.” So this is the Democrats’ hardware. This was their grand slam at the end. The problem is it’s completely turned around and backfired on ’em.

RUSH: It hasn’t backfired on ’em yet. No, no. Nothing backfires on ’em. I mean, it does, but that doesn’t stop them. There’s no shame over the fact that nine months of lies have been told and they haven’t been right. That just means, in their minds, they haven’t gotten the goods yet. They think this is it, and the fact that they think this is it? They’re throwing all their eggs into this basket. That tells me all the stuff that came before it really doesn’t matter hill of beans.