Steny Hoyer to Trump: You Promised to Fix Obamacare!

RUSH: Let’s go to the audio sound bites, ’cause Steny Hoyer is now out. Oh, wait ’til you hear this. This is shaping up so sweet. This is gonna be… Folks, trust me. Right now, this is gonna sound like it’s an absolute disaster, and I’m telling you this is a golden opportunity contained in this. Let’s go in order. This is Trump at the White House working lunching with military members. It looked like it was in the Cabinet Room, but it was during a working lunch with military members. Trump speaking about the effort to repeal and replace Obamacare, sound bite number one…

THE PRESIDENT: I am very disappointed because, again, even as a civilian for seven years I’ve been hearing about health care, and I’ve been hearing about “repeal and replace,” and “Obamacare is a total disaster. ” I’ve been saying that — Mike, I think you’ll agree — for a long time. “Let Obamacare fail. It will be a lot easier, and I think we’re probably in that position where we’ll just let Obamacare fail.” We’re not gonna own it. I’m not gonna own it. I can tell you the Republicans are not gonna own it. We’ll let Obamacare fail and then the Democrats are gonna come to us and they’re gonna say, “How do we fix it? How do we fix it?” or, “How do we come up with a new plan?” For so many years, I’ve been hearing “repeal and replace.” I’m sitting in the Oval Office right next door — pen in hand — waiting to sign something. And I’ll be waiting, and eventually, we’re gonna get something done, and it’s gonna be very good. But Obamacare is a big failure.

RUSH: (laughing) “Eventually, we’re gonna get something done.” Okay. So you heard President Trump there expressing the frustration he been hearing for seven years. It’s bad. He’s been watching for seven years. They vote to repeal. Now they can’t vote to repeal it! He’s saying, “I’m not gonna own it.” He knows what’s going on. He knows that he’s up against an entrenched elite establishment which is trying to get him out of office, the silent coup. And he’s telling them, “You people, you’re lying to constituents. I’m not. You’re telling them you’re gonna do things and you don’t do ’em, and I’m not taking the heat for it.

“Well, we’ll let Obamacare fail. The Democrats are gonna come to us; they’re gonna say, ‘How do we fix it? How do we fix it?'” You know, it’s interesting how this is all shaping out. Now it’s the Democrats who are upset that Trump’s gonna let it fail! It’s their baby. Obamacare was great, remember? I remember Pelosi practically singing on the day that they signed it into law that Obamacare bill. They had the Democrats… Debbie “Blabbermouth” Schultz had her own Greyhound bus to take her and her select few up to the White House for the signing ceremony, and they were as happy as they could be.

Pelosi was saying, “Affordable health care for all Americans. Affordable health care for all!” And I’m saying to myself, “Does she really think that’s what they did there? Is she that ignorant? Does she not know that that’s the last thing it is? It’s not ‘affordable,’ and it won’t be for ‘all Americans.'” There’s a part of me that believes these leftist Democrats are so isolated and so unattached to reality and so emotionally invested in their government is god and does not do anything wrong, they just think, “We passed a health care bill and the government’s gonna provide health care for everybody, and we sign it, and magic happens!

“Affordable health care for all Americans,” and then when people oppose it, they can’t figure out why. “It’s affordable health care for all Americans,” and it isn’t. So it bombed. Obamacare’s in a death spiral; it’s spiraling down. You know the details. Premiums are unaffordable. Deductibles are so high that even people who have policies, many of them can’t afford to use their policies. So they effectively don’t have insurance. It’s like a feature in your phone. If you don’t know how to use the feature, the feature may as well not even be there, right? So big whoop.

So if you have insurance but you can’t use it because the deductible is too high, then you may as well not have it, and yet you’ve paid for it, or somebody has paid for it for you. But you still can’t use it. The exchanges are shutting down, insurance companies are pulling out, premiums are going up 43% — and if we don’t repeal this, that’s gonna continue! And this was the savior of the world of health care. The Democrats sold this as a one-time fix that was going to be a panacea, and now it’s imploding. Because it was designed to!

It was designed to implode with a Democrat in the White House. The last thing they ever thought was that Trump or a Republican was gonna win in 2016. So a Democrat (most likely Hillary) was gonna be in, and at the time it implodes, saving the day with single payer was the order of the day. Except now there’s a monkey wrench in the works, and that is the Republicans are in the White House, and they have no intention of going single payer. I say that. Trump doesn’t. I’m not sure about Republicans.

So let’s skip number 18 because that’s just Trump saying that the solution here is electing more Republicans in 2018. We don’t… Maybe in the Senate, yeah, but that’s not the problem here. The problem is not “not enough Republicans.” Are you kidding me? That’s not the problem. The problem is quite simple. The Republicans that are there don’t want to repeal this because they see the world through the eyes of the left. Okay, so Steny Hoyer on CNN this afternoon during a conversation about Trump saying, “Let Obamacare fail. We’re not gonna own it.” Steny Hoyer, number two in the House on the Democrat side.

The American people were lied to over and over again from the Oval Office by the president — by you, Hoyer — by Pelosi, by every one of you Democrats. You even lied to your fellow Democrats about abortion possibilities in the bill in order to get it passed. And now Trump has thrown down the gauntlet: “I’m just gonna let it fail.” (whining) “You promised to fix it! You promised to fix it!” Is that not chutzpah? The Democrats — who gave us this mess — are now claiming it’s Trump’s responsibility to fix it.

Why did we need to lower costs? You people in the Democrat Party gave us a panacea. Why do we need to lower costs? Why did your concoction end up being such a disaster, Hoyer? Hmm? These are the questions the Republicans ought to be asking. Why in the world am I the only one out there saying it? Why aren’t the Republicans at every camera or microphone today carrying this water? 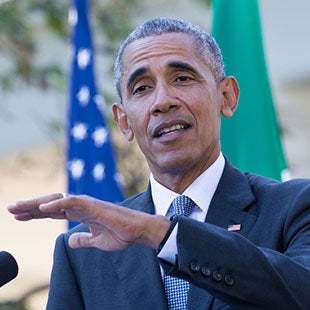 And folks, this what I meant when I said earlier there’s an opportunity here, because this is flushing the Democrats out. They’re being forced to admit indirectly that their idea is a disaster and that it needs to be fixed and that Trump is a mean guy ’cause he’s just gonna let it implode. Well, if you ask me, the creators of this mess and the people that implemented this mess, there’s not a single one of them with an R by their name. There’s not a single Republican that participated in creating Obamacare, not a single one of them that voted for it. We have tried to bail this thing out who knows how many times. For whatever reasons the Republicans don’t want to repeal it.