Donald Trump and His Base vs. Washington

RUSH: We start with Brian Kilmeade this morning on Fox & Friends.

KILMEADE: Rush Limbaugh was speculating yesterday on what went wrong, and he believes Republicans and Democrats, on some level, are fighting against one man: the president.

RUSH ARCHIVE: There was no way that this establishment was going to permit an outsider to come in and clean house and show how Washington can work and blow their cover for the last how many decades. They were not gonna make this easy for Trump. It has never been about Trump unifying the Republican Party in order to beat the Democrats, and that’s been the mistake. That’s not the fight here. The fight is not Republican versus Democrat. The fight is Donald Trump and his cadre and you, the Trump base, versus the Washington establishment. It has always been that and nothing more. We’re in the midst of a silent coup. These people are trying to take this president out, and everybody understands that. 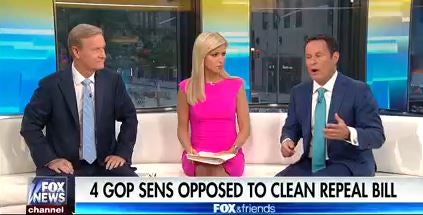 DOOCY: People need to understand, any Republican who votes against the motion to proceed — and Mitch McConnell’s gonna hold it next week, probably on Tuesday — is voting to keep the Affordable Care Act, Obamacare as it is, because this is the end of the road.

KILMEADE: Democrats should laugh for about four seconds because they’re gonna turn around and realize they’re responsible for the monstrosity that’s sitting behind them called Obamacare that caused them to lose literally a thousand elections, from the local, to the governorships, to the House, to the Senate.

RUSH: It’s a large reason why. It’s not a total reason, but it’s one of the reasons why they’ve lost 1,200 seats. Obama by himself is another reason. That’s another thing they’ll never admit. But Obama himself was one of the major reasons Democrats kept losing elections, outside of the ones Obama was in.

What they’re talking about there, and Trump alluded to it yesterday, “Look, we’re gonna let it implode. I mean, if we can’t repeal this thing and if nobody is gonna join us in trying to fix it, we’re just gonna let it implode.” And the Democrats immediately, immediately came out from behind whatever it is they’re hiding and claimed that it was irresponsible of Trump to do this. And I found that so delicious and ironic because it’s the Democrats’ baby. They loved Obamacare. They kept telling us how wonderful it was.

They forced it on this country. They forced Obamacare on the people of this country who did not want it. And now that it’s imploding and its costs are out of sight and its premiums and deductibles are so high that people who do have insurance, in many cases can’t afford to even use it. They won’t join in an effort to fix it, but let Trump say, “You know what? We’re just gonna let it implode.” And they come out of the woodwork and talk about how inhumane and inconsiderate that is and how it’s gonna hurt. People are being hurt now, is the point. People are in dire straits and consequences right now because of Obamacare.

No, you guys are. The fact that they are desperate for somebody to fix this speaks volumes about the truth of this. I think they’re terribly worried that it is going to redound negatively to them, if that is indeed what ends up happening, just allowed to implode.

See, don’t forget, folks, this is the design. It is designed to not work and it’s designed to not work inside of 10 years. Obama laid this all out in a speech to the SEIU in 2007. He told that union audience that there’s no way we could get single payer done in one piece of legislation. The American people aren’t ready for it. The American people aren’t ready for Big Government socialism. We gotta creep it in on ’em. And he laid out, it’s gonna take 10 to 15 years. And that’s what Obamacare is.

The design is working exactly as planned. The difference is that they expected a Democrat to be in the White House at the moment of implosion, at which time it would have been easy to make a call for single payer to save the health care system of America that the insurance companies broke. Tell you what the story was gonna be. Tell you what the narrative was gonna be. The Republicans and the insurance companies and their greed is why Obamacare didn’t work, but that’s okay, because we Democrats care about you, we got a solution. Single payer, everybody on Medicaid, everybody on Medicare, whatever it is, that’s the plan.

But now that’s been foiled because they don’t have the Oval Office. So now they’re panicking. Because the design is working exactly as designed, and it’s imploding right on schedule, but the guy in the White House now is content to just let it wither away on the vine. Finally, Erick Erickson was brought on, asked his thoughts of all of this.

RUSH: Bill in Macon, Georgia, I’m glad you called. Great to have you on the EIB Network. Hello.

CALLER: Hey, Rush, I think there’s one thing you’re missing. I really think this whole “I’m not supporting Trump” is simply a means by the establishment and party leadership to get rid of the base by other means, by simply frustrating us voters. Do you agree or disagree?

CALLER: They’ve left me with two choices in 2018. I can, A, not vote at all, which essentially takes me and everybody else out. Or, B, I can go ahead and continue to vote for them in 2018, 2020, which is essentially giving them absolutely no incentive to change. I look at it as a product. If you know your customer base has nowhere else to go except you, where’s your incentive to change?

So we don’t vote, okay, they get rid of the base. They build a new coalition based on whoever they think they want to have. Or, B, they get a compliant group of voters who have no choice to vote for except for them. So it’s a win-win for them either way. There’s nothing else, Rush, I can do. I put a sign out. I sent money to Trump. I sent money to the party, and I voted straight Republican ticket. As a middle class person, I have no other options. Between not voting at all or continuing to vote and keep doing the same thing I’ve been doing every two years. That’s where I’m at.

RUSH: Well, I see your point. You’re saying that the Republicans have you over a barrel. They know you’re not gonna vote Democrat. If you don’t vote, big whoop. But if you are gonna vote you can’t help but vote for them because of the other choices you have, therefore why should they change to accommodate what you want when they’re gonna get your vote anyway. But your belief is they’d just as soon you not be voting for ’em and they’d rather try to come up with a brand-new coalition that they could say win with, that would be more moderate and more reasonable and less social issue-oriented, right?

CALLER: Yes. Because Jeb Bush made that a key. And you even commented on it quite a bit in 2015, 2016. That was a key component of his message. I can win without the base.

RUSH: Yeah, but how many delegates did he get?

CALLER: Oh, he got none.

RUSH: He got three.