RUSH: There’s other audio sound bites, including from President Trump’s interview in the New York Times, many of you wondering why would he do that. Can I tell you about this interview? And of course he dumped on Jeff Sessions. He has been obviously irritated by Sessions’ recusal from the day it happened and he hasn’t been able to forget it. And I must tell you we’ve got a sound bite of me expressing total disbelief that Sessions would recuse — to Al Franken, for crying out loud. It all happened during interrogation, the confirmation hearings with Al freaking Franken. 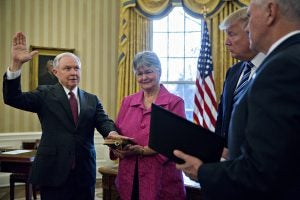 Can you imagine, would that have not been great if Trump says to Ivanka, “Hey, have your kids show the New York Times reporters how well they can speak Russian.” But it was Chinese. Anyway, she couldn’t believe that Trump was as engaging and nice and upbeat. They expected to encounter somebody beaten down, ready to give up, beg for mercy or what have you, because that’s what they’re trying to create, and they got just the opposite, and they were shocked by Trump’s attitude, which was positive and upbeat, engaging and nice.

And you can tell reading that interview, he was happy, he enjoyed answering those questions the way he did. I haven’t heard a lot of it, but I’ve read it. And I was really quite stricken by it. Not stricken. It shocked me, in a way, positively, of how open and real Trump was in this interview.

RUSH: President Trump sat for an interview with the New York Times. They put the audio of it on their website. There were three reporters, among them Maggie Haberman, who used to be a Politico. The reporters were all shocked at how engaged Trump was, how upbeat he was, how happy he seemed. Ivanka, as I say, brought in his granddaughter, six years old. He proudly asked her to show the reporters how she can speak Chinese, which she did. But he unloaded in this interview on Jeff Sessions.

THE PRESIDENT: Jeff Sessions takes the job, gets into the job, recuses himself, which, frankly, I think is very unfair to the president. How do you take a job and then recuse yourself? If he would have recused himself before the job I would have said, “Thanks, Jeff, but I’m not gonna take you.” It’s extremely unfair, and that’s a mild word, to the president. So he recuses himself. I then end up with a second man who’s a deputy.

RUSH: And he doesn’t particularly like that guy. But the Sessions recusal was kind of shocking. I remember when it happened, and I said why? All because of Al Franken questioning during confirmation hearings? I said, “This doesn’t make any sense.” Trump’s attitude was that if Sessions hadn’t recused there would be Mueller. We would have a special counsel. But since Sessions recused, that meant that there was no Trump ally who could stand in the way of the appointment of the special counsel, which is unnecessary. I must admit I was perplexed.

But I tell you also what I thought. I thought when I saw this last night, and I read it, I didn’t hear the audio until just now. I read this last night, and I said, “He’s sending a signal to Sessions he wants him to resign.” He doesn’t want to fire him. Sessions was one of Trump’s earliest supporters. He’s kind of like Mike Flynn in this regard. Sessions was early with Trump, and it was about immigration, it was about the wall.

I’m not sure how many of you remember, but Jeff Sessions was one of the first mainstream Republicans in the United States Senate who went all-in with Trump. He went to rallies, and Trump was proud to stand next to him and pointed him out whenever he was at a rally, brought him up on stage, let it be known that he was being considered for attorney general. Trump loved him! He was Trump when it came to the issue of immigration and law and order.

And this recusal just blindsided him. I’ll tell you why. I think Trump believed, since Sessions was so willing in the Senate to go against amnesty and to go against comprehensive immigration reform, I am convinced that Trump thought that Sessions was a fighter just like Trump sees himself. And then when Sessions recused, Trump was surprised.

So this was, I think, an invitation to resign last night. Sessions came out today and says no way, I love this job, I’m very tuned to it, I want to serve my country, and I’m gonna continue to do this as long as it’s appropriate. So he sent the message back that if you don’t like me here you’re gonna have to fire me ’cause I’m not gonna resign.

The Russian investigation — and I don’t know for a fact, but I know for a fact that Trump is irritated to all get out by this ’cause he didn’t do anything and there wasn’t any collusion. The Russians had nothing to do with the outcome of the election. And if I were in Trump’s shoes I would be so livid about this I wouldn’t be able to contain myself the way he is. It is that absurd. This is totally ridiculous.

Now, this Mueller investigation with no limits and no time limits and no financial limits, Mueller can go investigate anything and in fact said he’s going to. He’s going to investigate Russians that rented apartments at Trump Tower all the way back in 2008, for crying out loud. Any Russian Trump has ever known or spoken to is going to be investigated. What this really is is the biggest opposition research program that there’s ever been, sanctioned by taxpayer dollars.

You have all Obamaites and Clintonites that are Mueller’s lawyers here, 13 or 14 of them now. They have no limits on money, no limits on area, they can go anywhere, there are no time limits. They can dig up every bit of dirt there is on Donald Trump in preparation of the 2020 election. If nothing else comes of this, the oppo research that Mueller and his crew will create for the Democrats to use against Trump in 2020 is striking. Here is Sessions, audio sound bite number seven, this morning at the Department of Justice.

SESSIONS: We in this Department of Justice will continue every single day to work hard to serve the national interests, and we wholeheartedly join in the priorities of President Trump. He gave us several directives. One is to dismantle internet transnational criminal organizations. That’s what we’re announcing today, the dismantling of the largest dark website in the world by far, and I congratulate our people for that. I have the honor of serving as attorney general. It’s something that goes beyond any thought I would have ever had for myself. We love this job, we love this department, and I plan to continue to do so as long as that is appropriate.

RUSH: Meaning, you’re gonna have to fire me, ’cause I love it, and I’m honored to have it, and I don’t want to leave. Skip forward to number nine. This is Maggie Haberman. She’s one of the three reporters that the New York Times assigned to this interview, three reporters to do an interview. I guess they all need plausible deniability when the fake news gets published. Anyway, she was on Anderson Cooper 360 last night on CNN. Cooper said, “How did Trump’s demeanor seem? How did he seem compared to other times that you’ve spoken with him?”

HABERMAN: Incredibly upbeat, you know, when I contrast him on Air Force One last week and today with some of what we saw earlier in the administration, for whatever reason, he seems to be in a pretty good place.

RUSH: Yeah, imagine that, for whatever reason, he seems to be in a pretty good place. We haven’t destroyed him yet, Anderson, but we’re working on it. Be patient, buddy. We’ll take him out sooner or later.

RUSH: I’ll tell you something else Trump did in that interview with the New York Times. He accused Comey of trying to use that dossier with fake Trump intel in it as leverage against him. Now, Comey presents it to him on January 6th, I think it was. That put it in the public domain. That meant that everybody could talk about it now. Comey gives it to him, so it’s news, the president was given this intel report — it’s that dossier golden showers and all that — Trump let it be known he suspected Comey was trying to set him up with leverage first by telling him about the dossier and letting Trump know that it was out there and it was forming the basis of an investigation.

Trump to this day does not think he’s under investigation. He does not think Mueller is going after him. Now, Dan Abrams, who used to work at MSNBC now works at Mediaite, I think is his site, he was on Good Morning America today, and he said, “I’ve never seen a president go after an attorney general, assistant attorney general, FBI director, deputy FBI director in the same interview. We’ve never seen a president go after law enforcement like this.” He predicts that Trump’s gonna fire Mueller inside of a hundred days. And if he does that, Trump supporters are gonna rally like you can’t believe it. They’re not gonna be embarrassed and they’re not gonna be upset, they’re gonna applaud. Do not doubt me.

They sense what’s going on and that’s exactly the kind of behavior they expect from Trump because it’s a swamp. He said he’s gonna drain the swamp. And no Trump supporter expects Trump to just sit there idly and let these people destroy him. That’s not who Trump is. Not for the sake of the system, not for the sake of the establishment, not for the sake of tradition, no. You don’t sit here and allow them to ruin you just to preserve some system. So we shall see.