RUSH: How about Jordan Spieth? Did you see Jordan Spieth’s round yesterday at the British Open? (interruption) Okay, you didn’t see it. Jordan Spieth… I mentioned this after he won the Masters a couple years ago. What I find… I don’t want to sound like an old fogy here. But what a classy guy. He’s 24 in four days. 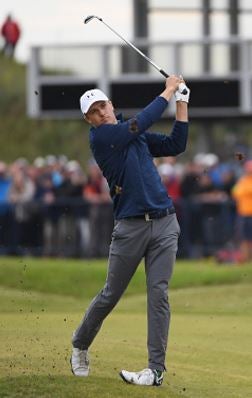 He’s the youngest player, professional, to win the British Open. He’s the first under 24 to win three majors. He’s from Dallas. He is… If you have a daughter, he’s the guy you would want your daughter to marry. He’s the kind of guy you’d like to have as your son. He’s just… I don’t want to ruin his image by saying “clean cut” but the guy is just cultured and mannered. He had one of the greatest acceptance speeches yesterday during the ceremony to present him the Claret Jug, the trophy. The things he said about his caddie, crediting…

He just credited everybody. He had the presence of mind to thank everybody. He’s very humble, just ideal. It is the kind of person that gives you faith in the Millennial generation. It was just wonderful listening to this man speak after his round yesterday. Matt Kuchar, who I’ve also had a chance to play with… The guy has a perpetual smile. He’s like the Joker. He has a perpetual smile on his face. He cannot not smile — and he, too, is the greatest guy. He’s 0-for-47 in majors, and he was up one shot with five to go and Spieth hits his drive on 13, 120 yards right of the fairway into no-man’s-land. It took 30 minutes before he hit his next shot. I’m not gonna waste your time if you didn’t see it. But it was really… It was well worth watching and it was a classy, classy ending for Jordan Spieth.

RUSH: It just so happens that we have a couple of audio sound bites from Jordan Spieth after winning the British Open yesterday. Here is the first…

SPIETH: My caddie Michael (chuckles) for keeping me in it today after not quite an ideal start. I was getting down on myself as anybody, I think, would. And this is as much mine as it is his right now at this very moment, and I really appreciate that, Mikey. You deserve all the credit in the world for this championship.

RUSH: This kind of humility is not seen. It’s why I’m taking a moment to play this. This is standout. It’s sad that it is worthy of note because it’s so unique. But this kind of humility — and particularly from somebody this age, 24 in four days. Here he is commenting on Matt Kuchar…

SPIETH: Matt, I really enjoyed battling with you buddy and —

SPIETH: — obviously could have gone to either one of us, and I got the good breaks today.

SPIETH: What a great champion Matt Kuchar is and what a class act. I took about 20 minutes to play one of my shots today, and Matt took it in stride, smiled, and there’s not many people I think that would have done that. And it speaks to the kind of man that you are and you set a great example for all of us.