Day Two: The Drive-Bys on Me, Trump and Sessions

RUSH: I have a conundrum here that’s a multifaceted dilemma. I am the first 12 sound bites of the roster today. Now, I get the sound bite roster about five minutes before the program, and I do not request — well, sporadically I will see something and I’ll send Cookie a note, say, “Listen to this and tell me if it’s any good,” ’cause I have thousands of little helpers out there who are constantly sending me video clips. 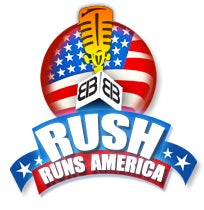 Everything I get I already know, so I have to be polite and write back, “Wow! I really appreciate this. Cool!” It happens all during the night. Occasionally there will be a video link to it. People know I don’t like videos, so they put ’em in there, people know I don’t like charts so they include the charts. People like to irritate me for some reason.

So, anyway, I’ll occasionally send a request up, but mostly I get the audio sound bite roster five minutes before the program, which means it doesn’t factor into the planning. And there isn’t a lot of planning. It’s all improv. There isn’t even any structure. But I do organize things here in an order I feel like I’d like to talk about them, and it all blows up when the show starts. Sort of like the battle plan never survives first contact with the enemy.

So my point is I don’t know any of this happened because I don’t watch cable news at night. So I get the sound bite roster 15 minutes ago and I’m the first 12 bites. I say, “What do I do with this?” You know me; I don’t like to make the program about me. But, I mean, this is incredible. It’s all about me and Sessions and the media and Trump and all that. I figure, you know, the best way, let’s just start with ’em and see what else that spawns.

RUSH: Okay, to the audio sound bite roster, part 2. The Drive-By Media on me, Trump, and Sessions. This is another montage prepared since our montage yesterday. Cookie tells me she could have made this 30 seconds longer if she wanted to. But she timed it out at about 38 to 40 seconds because it makes the point.

JOE GAROFOLI: (background noise) Something that could finally sever the conservative base from Trump: Limbaugh’s saying it is “unseemly.”

TRACE GALLAGHER: Rush Limbaugh said, quote, “I hate to see him being treated this way.”

JONATHAN LEMIRE: … Rush Limbaugh came out against, and very much sided with Jeff Sessions.

KURT BARDELLA: Whether it’s Rush Limbaugh or commentators, they really don’t know what to make of it.

NICOLLE WALLACE: The Holy Grail, Rush Limbaugh. This is the first big fight.

TERRELL BROWN: Rush Limbaugh criticized the president for his attacks.

RUSH: Did you hear that, Dawn? Did you hear that? That was Alisyn Camerota at CNN. “There’s a theory that if you’ve lost Rush Limbaugh, you’ve lost the argument.” This, my friends, is going to become a stand-alone promo line that we will continue to use and throw in at random moments, such as, “In all four corners of this world, [I am] a household name.” And I did it without Twitter, by the way. Here is Alisyn Camerota; I’m not sure she knows what she did here. I’ve never had anything but friendly relationships with her when she was at Fox, never had any contretemps whatsoever. But I don’t know if… She’s making her comments here in the context of the Sessions and Trump imbroglio, but this? This is…

RUSH: I mean that works if it is about anything, not necessarily about Trump and Sessions. Now, I’ve polled the staff, and they have taken my advice. They do not watch cable TV news at night, as I don’t. I asked Snerdley. Dawn, I didn’t ask you. Do you watch cable TV news at night much? (interruption) No? (interruption) “A little bit.” The reason is that nobody else know that this happened last night. I didn’t know that it was happening ’cause I don’t watch.

So as I listen to this stuff, I get the impression that these people think there’s a big feud going on between me and Trump, and there isn’t. I have not… The way these people make this sound is that I have essentially broken away from the White House and have assumed a position in the foxhole with Jeff Sessions and that I am there to shield Sessions and maybe even to return fire at the White House. And that is not what has happened here. I don’t think the White House thinks that there is a feud going on. It’s fascinating.

They have their desires in the media. They are desperate for Trump’s “loyalists” to begin to peel away, and they are under so many mistaken impressions about who the Trump loyalists are. They are under a terrible misunderstanding of who Trump supporters in the media are and why they support Trump, and they’re really off the reservation when they try to understand voters and their loyalty to Trump. They’re still stuck in their age-old way of looking at the world, and that has many factors. “Conservatism is odd and weird.

“But there are some in the conservative movement who are at least reasonable and intelligent that we can quote without making ourselves the look like idiots,” and I happen to be one of those on some days. Other days, I’m a reprobate pig and am “only an entertainer.” Other days, I’m “the titular head of the Republican Party.” For their purposes here — in their eyes, what they hope is happening — I represent the leadership of the conservative media who signs up with Trump in a tenuous way.

And they are hoping that we have had enough and that we are ready to withdraw and we are ready to admit that we’ve seen the light, that Trump was a mistake, that Trump is this or that. That’s it, and so they present these comments: “If you’ve lost Rush Limbaugh…” Trump hasn’t lost me. I don’t think he looks at it that way. I mean, I certainly haven’t signed up with the Democrats. But they have narrow ways of looking at things, which is really based on what their hopes and desires are, and they plug those in and turn ’em into reality in their world.

RUSH: Moving on to the audio sound bites, Bill Kristol. Now, Kristol doesn’t mention my name here, but it is obviously inferred. Bill Kristol on CNN’s New Day today talking to Alisyn Camerota about Trump’s public criticisms of Jeff Sessions, question: “What does it mean when the White House is losing conservative voice?”

It doesn’t mean that. It doesn’t mean that at all. But that’s what I think they hope it means. And so since they hope it means that, it effectively means that. And then they start their news reporting with that narrative. “Conservatives, led by Limbaugh, are beginning to abandon Trump in droves.” And they bring in their panelists to discuss what it all means, and that’s what they’re doing here with Bill Kristol.

KRISTOL: They deserve to lose them because Trump has revealed his character, he’s a bully. He wants to fire Bob Mueller. Sessions is in the way because Sessions is recused and Rosenstein won’t do it. He wants to force Sessions out, try to make a recess appointment as Attorney General and have that recess appointed Attorney General fire Mueller. That’s what this is all about. Sessions has been a good Attorney General from Trump’s point of view in terms of policy, a loyal supporter of Trump. And it’s deeply revealing about Donald Trump. I don’t like this narrative, “Oh, Trump and Sessions are in a fight.” Trump has attacked, tried to bully Sessions. Sessions has been doing his job.

RUSH: They are talking about recess appointments. That is the latest scuttlebutt, that the Trump team is thinking they — well, you’ve had Grassley, who is the chairman of the committee in the Senate, he said, look, if you fire Sessions, good luck getting your next guy confirmed. Our calendar is full. We’re only here 20 days the rest of the year and we don’t have a single day left open to do confirmation hearings for any replacement. I’m making up the 20-day figure, but it isn’t many more than that.

I mean, you’ve got the August recess, which I think they’re gonna work a couple weeks of, and then you’ll have the reelection recess. Then you have the Thanksgiving recess, the Halloween recess, the Yom Kippur recess, Christmas recess, the New Year’s recess, Super Bowl recess, AFC playoffs recess, all these.

They’re not gonna be there that many days. But there’s more than that. Grassley is telegraphing here in his own way, “You better not because we’re not gonna confirm whoever you replace.” So now they’re supposedly looking at a recess appointment when Congress goes on one of these many upcoming recesses, you fire Sessions, and you put somebody in there, a recess appointment, who will be in there for a year and a half before the requirement to name somebody officially, that would then trigger confirmation hearings.

I’m having a tough time believing that’s what this is really all about. And I know I’m an outlier. I know all the smart money and all the serious analysis is that this is real, that Trump is genuinely ticked off, and he’s trying to get Sessions to quit. Sessions isn’t gonna quit, for some reason he doesn’t want to fire him. There’s nothing strategic about this, in other words. People think this is straight up what this. And I have my doubts ’cause none of this makes any sense to me.

As I’ve gone through yesterday, I don’t want to bore you with repeating what I said yesterday, but it just doesn’t make any sense. Because if he wants to fire him he could do it yesterday, could do it last week. Here’s another thing. Sessions recused himself back in, what was it, January or February. Why hold on to this this long, and what causes it to resurface now? How long do you hold grudges? I know Trump’s Trump, he’s a different ball of wax.