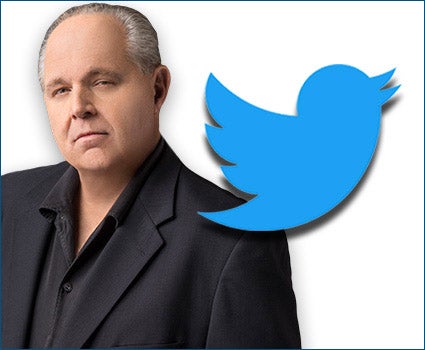 RUSH: Twitter. This stuns me. People ask me why I’m not on Twitter. I’m not embarrassed to answer this. I can’t figure it out. I am Mr. Tech. I am the guy in this office and in anybody’s home whenever anybody has a question about their iPhone, their iPad, their network, whatever, printing, it’s me they come to. I can’t figure it out, I mean looking at it on the page. I can’t figure out who is sending what and who’s commenting. I don’t know. I don’t get these addresses @realdonaldtrump. The way it looks to me, every tweet that somebody sends it looks to me like it’s a tweet they received. It’s just so convoluted.

My brother, who is not particularly logical, understands it to a T, and I can’t figure it out. It’s so frustrating I set it aside. And there’s other reasons I don’t do it, too, because once you hit the “send” button you can’t get it back. But all of that is irrelevant to the news here.

“Twitter Fails to Grow Its Audience, Again.” This boggles my mind. There is no more promoted internet social media group than Twitter. Do you realize, if you pay attention to it, almost every quote in a Drive-By news story is a tweet? Reporters don’t spend as much time calling people; they just look at their Twitter feed. This is especially true in sports. If you didn’t know better, you would say Twitter is the only way people communicate. And if you thought that, you would have to accept that Twitter is omnivorous, it’s omnipresent.

You can’t escape it, and yet their user base is declining, and their revenue is declining. “Twitter Inc. failed to attract more monthly users in the second quarter, spooking investors looking for evidence that the company is on a sustainable long-term growth path. The shares tumbled the most in nine months, even as quarterly revenue topped analysts’ projections.”

Well, topping the projections didn’t mean much. Ad revenue is down. Users are declining. This doesn’t make sense to me. You know, one of the old saws in the PR business — you’ve all heard it — “Just as long as they spell your name right, it doesn’t matter in the end what they say. Just get your name out there.”

And people that don’t get a lot of PR strive, work hard to try to get it, and they use Twitter as a means of getting there. And yet, as often as Twitter is cited, I mean, it is a primary source for all of journalism now. You would think, with as many references to Twitter as there are — and here’s another aspect of it. All of these young Millennials and young kids who are seeking fame, Twitter would seem to be the best route to go. Because Twitter is cited and quoted constantly.

So if you could come up with a Twitter account and send out pithy tweets that maybe some journalist at the Washington Post would pick up on and it gets published, then you would have your fame. It seems like a lot of people would be seeking fame and fortune via Twitter. None of this makes sense.

Jack Dorsey and that crowd at Twitter? Are you…? (interruption) Are you kidding? All I would have to do is take the wrong position on the transgender ban in the military and they would block me and they’d call it a “hate site,” like they do a lot of conservatives. Nah. I’ve thought about it back and forth. My broadcast partners are paranoid that I’m gonna go to Twitter. They’re literally paranoid. I think they’ve got back-end doorways to cancel my account if I ever start using it. (interruption) Well, they do.

They’re scared to death of the SEND button. You can’t get it back. Look, folks, I’m just stunned. Take any individual. Take a movie star. The more they’re mentioned… Brad Pitt! Brad Pitt gets mentioned all the time, and Brad Pitt — aside from some of the stuff — his fame is fortune and growing. His image is… Well, it doesn’t make sense that something this often referenced, this omnipresent, is losing. It’s made to look like Twitter is the primary mechanism people use to say hello to each other!

It just doesn’t make sense that it’s losing ad revenue and losing users, because it’s become, I think, for lazy journalists, the go-to place to get quotes, thoughts, create controversy, or what have you. “A long-term turnaround depends on Twitter expanding its audience, but it’s going the opposite direction right now.” Look, Facebook has two billion people. Twitter is at 328 million monthly active users and declining. They ought to be picking up 328 million every week, given the frequency with which it’s cited.