CALLER: Hello, Mr. Limbaugh. Jerry Jones absolutely did the right thing to demand that his Dallas Cowboys stand for the national anthem. On the contrary, Robert Kraft, who owns the New England Patriots, is an absolute disgrace and a coward for not demanding that his Patriots stand for the national anthem. And that includes the great Tom Brady who’s not so great as far as I’m concerned. And, you know, what can you expect from —

RUSH: Wait. Wait! Hold on! You need to clue me in on what the Patriots are doing. I know… Aren’t they all linking arms with Brady and…?

CALLER: Yes, they are, and it’s not right. Robert Kraft and Tom Brady and Bill Belichick don’t have any respect for our military, but I don’t… That doesn’t surprise me —

RUSH: Now, wait a minute! I happen to know that’s not true.

CALLER: Well, it’s true in the sense that Robert Kraft should have come out a lot sooner than he did, and he didn’t do it because a lot of his players are black, and he’s afraid he’ll have a mutiny on his hands.

RUSH: Well, every owner is worried about this. Every owner is scared to death with this thing. They don’t know which side to fall down on and they’re judging that there’s less risk siding with the players. What if they side anti-players and players say, “Okay, Mr. Kraft, we’re not showing up Sunday. No game.” What does he do? What does he do then?

CALLER: I look at the track record. In other words, I don’t… After… Robert Kraft doesn’t have any character concerning the 2007 Spygate scandal and the 2015 Deflategate scandal —

CALLER: — and he’s become a billionaire on the backs of his moronic and so-called Patriots Nation fans who buy his sweatshirts and sweatpants and Tom Brady toilet seats. But, look, you know, what can you expect —

RUSH: Wait a minute. Can you buy a Tom Brady toilet seat?

CALLER: Yeah. They have all kinds of things. Anything you can imagine for these dummies to buy. And you know, there’s a double standard, Mr. Limbaugh, in this sense, that Kraft doesn’t want his players to stand for the national anthem. But Kraft, Robert Kraft is a fervent Zionist, and he owns a stadium in Israel; but you better believe that he would demand that his players stand for the Israeli national anthem. So, as far as I’m concerned — 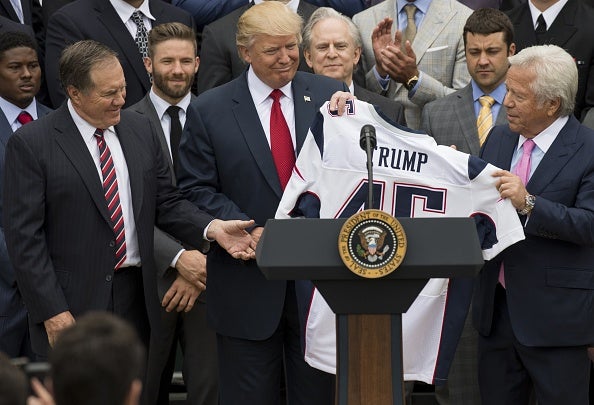 RUSH: You really…? (sigh) I haven’t spoken with Mr. Kraft at all during this controversy, but I got to know Mr. Kraft and his late wife rather well, and he’s not the person you describe here. As I say, I haven’t spoken to him during this controversy, but I know all of these owners when it started… Look, I think the NFL totally misjudges who its audience is, who its fans are. I don’t think there’s any mistake about this. I think the NFL doesn’t… Well, if you look at who the primary advertisers are in the NFL, you’ll know who the bulk of the audience is that spends money on the game.

Either going or paying to watch it or buying memorabilia like you said. But I think the NFL is like many corporations in this country who have fallen prey to believing the media they see each and every day. And if they have, then they believe that the heart of America is on the left and that traditional American virtues are now in the minority and that we are an “advanced, hipper culture.” As reported by the media, the majority of Americans agree that the cops are wantonly murdering African-Americans. A majority of Americans agree with so many of the other cultural rots that are taking place.

I think they largely believe this. And they’re mistaken about it, like the Democrat Party believes its own polls. They still can’t get over the fact that Hillary Clinton lost, because their polls lied to ’em, Nate Silver lied to ’em, their big data analyst lied to ’em. And they’re still not in touch with America. They do not know the heart of America, and I don’t think the NFL does, either. Now, individual owners are different. There are seven or eight of them that know exactly who the audience is. Jerry Jones is one; it’s obvious.

But these guys are operating from the get-go on this story from a position of fear. And the fact that 75% of the players in the league are African-American and that’s who’s protesting, they feel compelled to side with their players. They want to win. Players feeling content, unified, happy, is all part of winning. And they think it’s necessary to go with the flow, and so what their players are into and could go, that’s what the owners are gonna be seen publicly as also being into because it’s unity in the clubhouse. It prevents chances for disruption and disunity, mutiny, what have you. This is really a tough time for them.

Much of it they’ve brought on themselves, and it would be so easy to fix this. But there doesn’t seem to be, aside from a few owners — and I don’t know of anybody in the league office who is prepared to deal with this the way it must be. This league is being harmed dramatically and in a major way by the people playing the game. The people playing the game are inflicting incredible damage to the business and the product. That’s a tough thing to admit, probably. And for them, they probably think it’s a dangerous place to go and position to occupy. Look, I’d love to continue on this, but I’m way long.