Salena Zito: Trump’s Base Will Stick with Him Unless He Becomes Part of the Swamp

RUSH: Salena Zito, one of the first in the media to correctly identify the strengths of Donald Trump via his voters and why they think and support Trump the way they do. She’s on CNN. She’s got a contract there. She’s an analyst, a commentator, shows up now and then.

She was on This Morning with Poppy Harlow. They’re talking about Trump’s rhetoric and how much damage, Bob Corker and the IQ test with Tillerson and all that. And Poppy Harlow said this to Salena: “Salena, we’ve seen friends of Trump try to communicate to him through the media. You know about the president’s base. You spent a lot of time reporting on ’em. Do you think Barrack is right when he says that Trump does not have a base? And if he’s not, does the base support Trump in spite of or because of his language and his tweets?” 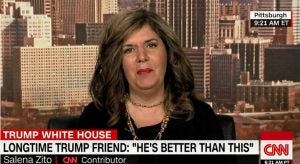 ZITO: I think they support him in spite and because of the comments. As far as his base going anywhere, he does have an unnatural base in that it’s in a really interesting alignment of different kinds of people, a lot of people, as you know, we missed during the election. But I haven’t seen any evidence of them going anywhere yet, but that doesn’t mean they won’t. I think if he becomes part of the swamp, that’s gonna become his biggest problem.

RUSH: Bingo. It’s only Trump that can drive his audience away, and the fastest way he could would be to become part of the swamp. But note the question here. The Barrack she’s talking about is Tom Barrack, presidential inaugural committee chairman, not Barack Obama. “Do you think that Barrack is right when he says that Trump doesn’t have a base, and if he’s not right, do they support him in spite of or because of his language –” these people at CNN haven’t the slightest.

It still doesn’t make sense to them that Trump has any supporters. Trump is so embarrassing to them, Trump is so pathetic to them, they can’t understand anybody liking Trump. And they are journalists. They’re supposed to be curious and all-knowing, and they’ve got closed minds. And rather than find out what they don’t know, they ridicule what people think that doesn’t make sense to them.