What I Know About Robert Kraft

RUSH: I want to go back to something that happened here yesterday on the program regarding the NFL. We had a caller from Worcester, Massachusetts. He was really wired, and he was on the warpath against the Patriots and particularly the owner of the Patriots, Robert Kraft. His point was that, in his opinion, Robert Kraft is very hypocritical because Robert Kraft is very devoted to building sports franchises, leagues, and so forth in Israel. 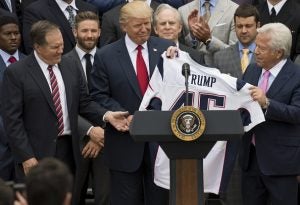 And that, if this were happening in Israel — if players refused to stand for the Israeli national anthem prior to contest — he would make them, this caller said. He would force them to. And the fact that he doesn’t here — the fact that Robert Kraft doesn’t make that happen here — supposedly meant that he wasn’t genuinely, full-fledged American. I want to just repeat a couple things about this, because it leads in here to a new development.

Now, I haven’t spoken to Mr. Kraft during this football season. But I got to know him quite well a couple, maybe three years ago now and his late wife Myra. And they both became really, really good friends, and I just want to tell everybody: He’s not at all the man that was portrayed by the caller yesterday. And I’m not attacking the caller. I mean, this is sports, and every fan has their opinions and so forth.

But the way Mr. Kraft was described, I’ve never, ever seen anything at all to indicate that Mr. Kraft is not full-fledged, 100% pro-United States, pro-America. He’s even a Trumpist.