RUSH: Now, James Toback. We talked about this guy yesterday. This is this Hollywood director that is really skatin’ along under the radar. The news yesterday, over the weekend was something like that 30 women had come forward and identified Toback as a Harvey Weinstein-type sexual harasser and abuser, and they detailed the guy’s technique. Now, the guy is Jabba the Hutt, folks. He’s about 72 or 73. He’s… I mean, bad. Diabetes is bad, and that means that Toback can only dream about sexual activity. He can’t literally…

Viagra wouldn’t help. Let’s put it that way. It might. I mean, he’d need take a lot of it. So Toback’s out there do… (interruption) Now apparently Snerdley just told me it’s 200 women. Is that right? (interruption) You’re not exaggerating? Two…? (interruption) Two hundred women are now coming forth… (interruption) Oh! Did you see what Kathy Griffin did with Lisa Bloom? Hang on. You know, these screen savers in here… There’s gotta be a way around this. Anyway, Kathy Griffin, you know who she is? (interruption) “She’s the slice and dice…” Yes, comedienne. Don’t make me laugh. She’s not a comedienne: She’s unhinged.

She’s a typical liberal. Anyway, she had a decapitated Trump head with blood dripping out of it. Well, anyway, Lisa Bloom, Gloria Allred’s daughter, was her lawyer, and she has just fired back at Lisa Bloom calling her a publicity whore, a fame whore, telling everybody that Lisa Bloom gave her the exact wrong advice. All Lisa Bloom wanted was to get on camera herself and use Kathy Griffin to do it. I mean, this is feminist-on-feminist war going on on the left. That’s happening. This Toback guy, now 200 women, and they are all pretty much telling the same story. 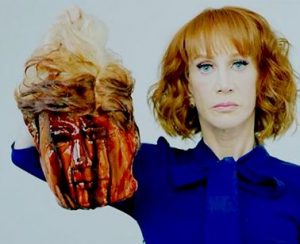 He approaches them in Central Park. He had one hit, one hit movie back in the early nineties. He’s not a household Hollywood name, but he carries his resume with him, and he gives away DVDs of his movies to prove to these women that he’s who he says he is. And he drags them back to his apartment to a hotel room for an “audition” where he tells them that in order to be cast for the role he has in mind, they have to get nude. He has to see them nude. Well, they’re all coming forward here. So you’ve got this happening now.

You know, I’m sorry for noticing this, but I have to make this observation. I’m not the first to do it by any stretch. But in both The Deuce and in these police procedurals, almost all of the African-American actors are cast as pimps, drug dealers, drug users, murderers, gang members, and it just finally hit me. Here’s Hollywood preaching to everybody. And the amount of smoking that goes on in movies and drinking! Now, here’s Hollywood preaching to us about the evils of racism and the evils of sexism, and look at the product that they pump out.

Now, black actors have to work. I mean, for every role that is available in a TV show, there’s probably 10,000 actors that want to get it. So they have to take the roles that are offered. But it is stunning to me how many of the roles are cliched and stereotypical of the exact kind of thing the players in the NFL are protesting. That’s the stuff that Hollywood pumps out. I think that there is so much internal strife and corruption, and I think they’re aware of their hypocrisy.

Now we’ve got this sexual harassment stuff that’s showing up in state capitals. Women representatives and senators in certain states are now starting to detail evidence of men hitting on them. It seems like it’s rampant, and it is rampant on the left where reside those who preach to us the holier-than-thou of racial relations and harmony and anti-sexism and anti-racism. But look at the crap and the drivel they put out. It just struck me.

Now, another email: “How come you’re not talking about the O’Reilly…?”

Look, folks. I’m famous enough. I don’t need to insert my name in this story in order to be famous. The thing about this story that bothers me other than the sordid details, is look at the people… I’m kind of walking a little bit of a narrow plank even pointing out this out. But look at the people inserting themselves in this story. They want to be part of it to get their names in the news. To me, this is… I don’t know. I don’t know. I’ll just tell you this. After I read some of this stuff, I realize how boring I must be and how grateful for it I am.