RUSH: Some headlines: “NFL Losing Viewers at Alarming Rate But Faces Limits on its Response.” Colin Kaepernick just went out and hired a publisher. Hillary Clinton’s publisher just gave Kaepernick a book deal. I have some prospective titles but I better keep ’em to myself. (interruption) It doesn’t matter if he doesn’t know how to write. Ghostwriters and what have you. This is half the thing. Now if he gets a Fox News gig, he will have achieved a career objective of many young conservatives. I’m teasing, folks. I’m just teasing here.

I’m in kinda one of these giddy moods today. Yesterday I was in a foul humor. Today, I’m not. Nothing changed. Just goes to show you how crazy brain chemistry is. Anyway, “NFL Losing Viewers at Alarming Rate…” Again, they don’t know why they’re losing viewers; they’re so obstinate about this, they don’t know why. They are dead wrong assuming why they’re losing viewers. They think it’s because of other competition for leisure-time dollars.

They don’t stop to think how many leisure time dollars it requires (chuckles) to be an NFL fan these days, not to mention the anthem controversy and the fact that the players are the ones taking action that’s driving people away. I mean, how do you square that? It’s the players people show up to watch, not the owners. Speaking of which, Reverend Jackson has weighed in, and I think the Reverend Jackson may need some clinical help.

You know, it’s been a while since we’ve heard from the Reverend Jackson. There was something that happened yesterday that I said, “We need the Justice Brothers to weigh in on this.” What was the news event? (interruption) The Hollywood…? (interruption) Yeah, yeah, that’s what it was. Oh, folks, if you missed this, this is… (interruption) Thank you for reminding me. BuzzFeed news had a serious editorial piece, an op-ed piece yesterday. The fact that Harvey Weinstein wasn’t abusing or accosting any African-American actresses shows how racist he is and how racist that means Hollywood is. 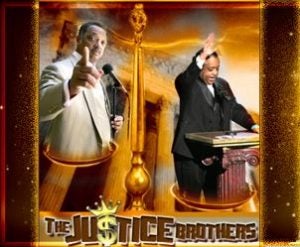 So are we to conclude that if Harvey Weinstein had invited some African-American actresses to his suite or elsewhere, that at least we could have said Harvey was not racist in his sexual harassment? I mean, who thinks this way? The left does. That’s right, and I said, “The Justice Brothers need to look into this. That would be perfect for Sharpton and Jackson to look into.” Anyway, the Reverend Jackson was on Fox Sports 1 Undisputed. That’s Fox Sports’ cable network, channel 219, DirecTV.

He bashed Donald Trump for referring to anthem kneelers as SOBs, and then he took aim at the NFL. The NFL’s doing everything it can to accommodate these guys! What is he doing aiming at the NFL? And here’s how he did it. “To go from picking cotton balls to picking footballs and basketballs without freedom is not very much progress,” the Reverend Jackson said yesterday. Do we have…? Let me check. Let me check the sound bite. Yeah, we’ve got this. I knew we had this. It’s audio sound bite number 19. Grab it. Here we are. Three…two…one…

JACKSON: All of the free agents around the world owe their wages and their — and their benefits to Curt Flood, who paid the price of rebelling against the system of oppression. In many ways, it — it is oppressive. They go from picking cotton balls to picking footballs and basketballs without freedom, is not very much progress. It’s just a — a lateral move. And what strikes me is that in football, the reason why some of the guys are standing when the president says fire them. And they’re talking about sons of bitches. These boys are not sons of bitches. They’re sons of mothers who have produced champions. They are not sons of bitches.

RUSH: All right. Now, but what did he just do? “You go from picking cotton balls to pickin…” Who picked cotton balls? Is he confusing that with boll weevils? You know, the Cotton Bowl in Dallas. He says, “You go from picking cotton balls to picking footballs and basketballs without freedom is not much progress. It’s just a lateral move.” He is attacking three different industries under one general umbrella — professional sports — that have made African-American men exceedingly wealthy!

And they have so much freedom that they can protest their own country and the national anthem, and their bosses defend them! What is he talking about? What in the name of Sam Hill is he talking about? This is why I am suggesting there may be a need for clinical help here. “You go from picking cotton balls to picking footballs and basketballs…” Notice he left out baseballs. How do you pick a football? I mean, you could say it’s an interception. An interception is called a “pick,” but that’s not what the Reverend Jackson means.

(summarized) “When the president says, ‘Fire them,’ you talk about sons of… These boys are not the sons of… They’re sons of mothers that produce champions. They’re not sons… But they’re just making lateral moves out there. They’re picking footballs, and they’re picking basketballs, and they’re doing it laterally with no freedom.” This is absurd. I share this with you simply to illustrate yet another miniature little implosion on the left. Everything coming out of the left these days — one way or another — is nonsensical.

And I really… What in the world is he doing attacking…? These sons of champions he’s talking about here are exceedingly wealthy. They are wealthy way beyond the national average, and their bosses are allowing them to take action which is hurting the game and still paying them. Lateral move? Anyway, I have missed the Reverend Jackson. I’ve missed this. He hasn’t been around. I don’t know where he’s been, but he hasn’t been around. For all the issues that would bring him from wherever he been hiding, this one?

Anyway, he’s on Fox Sports 1. How interesting might that have been to watch!