Hillary Should Be Worried — But Not About the Republicans Imploding

The establishmentarians who are admitting and demonstrating that they don’t have what it takes to fight people like you are leaving. That’s not imploding. That is an opportunity for improvement. Hillary also said the Republican Party imploding “frightens” her. Why would it frighten her? I remember Hillary saying in a Democrat primary debate back in 2015 that the Republican Party was one of the enemies she’s most proud of. It was in a debate with Crazy Bernie. She was asked, “Which enemy are you most proud of?”

She said, “Well, in addition to the NRA, the health insurance companies, the drug companies, the Iranians, probably the Republicans.” So why be afraid? She should be happy the Republican Party is imploding, if that’s what she thinks is actually happening. She says, “There are a lot of things I worry about. This is actually on my list of what I worry about. The Republican Party is imploding. It’s becoming a far-right captive party to ideological, religious, and commercial interests.” This is from a woman who gave Russia 20% of our uranium supplies in order to get $145 million in donations to her family’s slush fund and $500,000 speaking fees to her husband.

So keep worrying, Hillary. By the way, a Hollywood actresses… Speaking of Hillary, a Hollywood actress has accused Harvey Weinstein of rape now. “Actress Natassia Malthe has become the latest woman to publicly accuse … Harvey Weinstein of rape. In a press conference Wednesday in New York City alongside her attorney, Gloria Allred, the actress recounted an alleged incident shortly after the BAFTA Awards in 2008, in which Malthe said Weinstein burst into her London hotel room and proceeded to…”

“Instead, most GOP lawmakers rallied around Trump and his agenda Wednesday, with one all but saying ‘good riddance’ to Jeff Flake of Arizona and Bob Corker of Tennessee. ‘Maybe we do better by having some of the people who just don’t like him leave, and replace them with somebody else,’ Sen. Jim Inhofe of Oklahoma told The Associated Press.” Our old buddy Chris Cillizza. We like Chris Cillizza. He is wrong so much, but he’s innocently wrong. He tries hard, and he’s been fair to me, which I can’t say about very many of these people.

He has a piece. “Jeff Flake Just Flew a Kamikaze Mission Against Donald Trump — Arizona Republican Sen. Jeff Flake announced Tuesday that he won’t run for a second term in the Senate. But he made the decision about his political career months ago — when he decided to go public … with his indictment of both President Donald Trump and a GOP that had accepted such an interloper into its ranks.” Chris? We want to help here. Jeff Flake didn’t see this as a “kamikaze mission.” Jeff Flake thought that he was going to be reelected by acclamation. Chris, Flake thought he was gonna be heralded as a hero! He’s so out of touch, it’s a shame.

RUSH: From TheHill.com: “Clinton Did Not Know About Trump Dossier Until Publication.” It’s amazing, the smartest woman in the world is so damn ignorant of everything going on around her. She’s ignorant that her husband is out there raping Juanita Broadderick. Ignorant of the fact that her husband is having an affair with Gennifer Flowers and who knows who else. She’s ignorant of the intern traipsing around the White House and the Oval Office, Monica Lewinsky. Ignorant of this. She was ignorant of all the women, even though she headed up the bimbo eruptions unit. Smartest woman in the world ignorant of everything around her.

Remember that? I about choked on my ramen when I heard that. I remember laughing myself silly watching this stuff, as they’re trying to build up the image and reputation of basically an empty pantsuit here. Now she’s out there saying she didn’t know about the Trump dossier until it was published. That simply isn’t true.

One other little delectable piece of news before we head back to the audio sound bites. There is whole controversy about money and how it was spent and where it went. There’s an FEC complaint stating that the Clinton campaign and the DNC broke federal law over the Trump dossier. A website Called LawNewz cites campaign legal experts saying it’s illegal for a campaign to pay a law firm who then hires another firm to perform campaign related activities without reporting the purpose of the expenditures.

This is related to Marc Elias who lied to the New York Times and the Washington Post for a year. Marc Elias hired Fusion GPS to conduct research on Trump. Fusion GPS then hired Christopher Steele. Now, the reason that the Clinton camp hires a law firm here is to give them attorney-client privilege. You hire the law firm to hire sleaze balls, and that’s how you protect yourself from ever being tagged as funding the activity of the sleaze balls. And this is what the Federal Election Commission is going to try to unravel.

His name is Bob Bauer. Bob Bauer, not to be confused with Matt Lauer. This is Bob Bauer. He is the lawyer who runs the Washington office of Perkins Coie. This is the firm that was used as the cutout to get the Steele dossier about Trump written. Bob Bauer used to be the White House counsel under Obama. Bob Bauer was counsel, i.e., lawyer, to Obama’s presidential campaign. 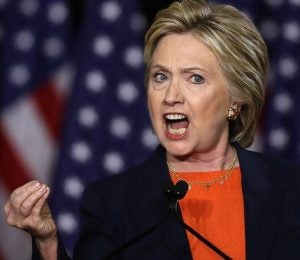 This is the guy that passed the money from the DNC and Hillary Clinton’s campaign on to Steele and to Fusion GPS. This firm was not picked by accident or happenstance. This firm is a political hack firm with direct ties to Obama and the Democrat apparatus. The idea that this is legitimate intel or that the Republicans had anything to do with this, as CNN is try to pass off along with James Clapper. And now Hillary saying, “I — I — I — I — I didn’t know, I didn’t know about it. I didn’t know until the dossier was … I didn’t have any idea.”

Meanwhile, while Drive-Bys have devoted 20 seconds to this yesterday and last night, Drudge had a flashback on his page about how the media nearly went hysterical over Donald Trump Jr.’s willingness to accept Russian dirt on Hillary. Remember that now vaunted meeting which turns out to have been nothing more than a Russian agent trying to influence legislation on adoption. There wasn’t any dirt passed on Hillary that was attempting, the way the meeting was set up, and of course Donald Trump Jr., “I’ll be happy to listen to that.” The media went nuts. They went hysterical trying to prove Donald Trump Jr. was colluding and this proves his dad was colluding, and nothing ever came of that.

But they’re ignoring all of this. Because everywhere you look on this Trump dossier you see thousands of Democrat fingerprints, from the Obama administration to the CIA to the FBI to the director of national security intelligence, to the law firm that was hired as the cutout. This is a full-fledged, 1,000 percent Democrat Party operation. This is community organizing on parade.

The difference here is that the lies that were made up and published then became passed off as legitimate intelligence, as far as the American people were concerned. Legitimate intelligence that they’ve been for a year trying to convince everybody that Donald Trump is illegitimately reelected, that he cheated, that he undermined the American democrat process. That he colluded with those sleazebag Russians to undermine the duly deserving Hillary Rodham Clinton. When in fact the undermining and the corrupting and the dirt and the sleaze is all originating and contained within the boundaries of the Democrat Party and their willing accomplices in the Drive-By Media.

CALLER: I have my own business doing construction and remodeling.

RUSH: Thank you, sir. Are you busy?

CALLER: I am busy. I’m swamped. We had a big hailstorm here — and, remember. Hooker: It’s a location, not a vocation.

RUSH: (laughing) Man! Is that on the population sign as you drive into town?

CALLER: It should be.

RUSH: (laughing) Anyway, it’s good to hear from you.

CALLER: I want to thank for having me on. I’ve listened to you since the eighties with my grandfather smoking cigars in his shop. 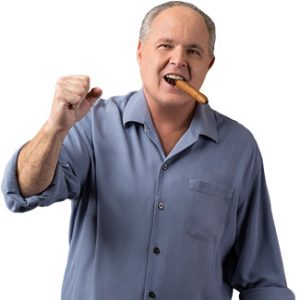 RUSH: I have a cigar going on right now.

CALLER: So I was wanting to ask: How long do you think the Democratic Party and the media can hang onto Hillary before they have to sweep her under the rug and make her disappear because it harms their elections?

CALLER: Or will they?

RUSH: Well, that’s the thing. Yesterday I was fully convinced that this whole thing — the reporting that she and the campaign and the DNC had paid for this dossier. I thought that was step one in getting rid of her. I thought that was the media and the party apparatus deciding that she’s overstayed her welcome. She won’t go away. She’s not the face they want of the party or anything else — and couple that with Weinstein. Weinstein is inseparable from the Clintons. I mean, Harvey Weinstein was a bundler, fundraiser. He was a fellow traveler.

You look who these guys… Look at the people they ran around with and hung around with, and to think that Clinton had no…? It just stretches the credulity here, and so I thought this very story was aimed at being the shove or the push to get her under the bus. But now last night, the way they are circling the wagons here in the Drive-By Media, I’m beginning to wonder, because I hear conflicting reports. I don’t think there’s any doubt that a lot of Democrats want her gone.

They gave her her shots. They gave her her chances to win the White House. She failed. She embarrassingly lost. How do you lose to Donald Trump? But she did. It’s one thing to lose to the young, cool, hip black guy. But to lose to the ogre of the NBC Access Hollywood video? They can’t believe that happened! In fact, you know what? I’m telling you something here, Conrad. I saw Hillary tweeted herself… This is, I think, her birthday or close to it, October 26th. She tweeted herself a birthday greeting last year that had a picture of her dressed like she was a Quaker.

She was five or six, maybe seven years old, and it says, “Happy birthday to a woman who will be president.” That was a year ago. So a year ago, you know that they were all thinking this was done. The election was a formality. She was the next president. Ninety-seven percent chance, said Nate Silver. Folks, imagine you expect the sun to come up every morning, and one day it doesn’t. That’s the panic they’re in, and they haven’t gotten over it, and they don’t want her being the face of the party. That’s what my theory was yesterday.